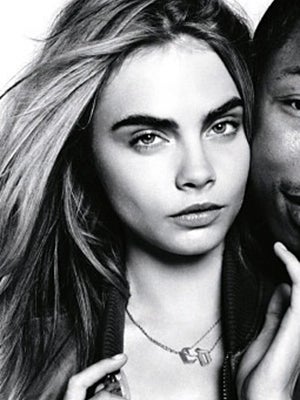 Photo: via Instagram / @caradelevingne.
As of today, there are two things we're confident in when it comes to the enigmatic Fifty Shades of Grey movie: One, it's hitting the big screen August 2014; two, Cara Delevingne will not be cast as Anastasia Steele. Despite early August rumors that the model was a front runner for the role, The Sun got word today that "the lead role was not something that was offered."

The source didn't deny Delevingne's involvement in the production per se; they simply said she was not playing the lead. Does this mean we'll be seeing them brows zipped up in leather come next summer in a supporting role? Perhaps. The casting for the movie has been the subject of many heated debates and disappointing letdowns, with the latest buzz-worthy headline being Pacific Rim's Charlie Hunnam playing Christian Grey. Delevingne shouldn't be too upset, though — her dream of acting is slowly coming to fruition with a feature in the new
Grand Theft Auto and a role in the upcoming British drama
Kids in Love. And if this whole acting thing doesn't work out as she hoped, there's always music to fall back on. Oh, and the runways, obviously. (The Standard)