Photo: Courtesy of The Weinstein Company
The ensemble cast hasn't always fared so well in Hollywood (we're still scarred from memories of New Year's Eve.) Call it too many cooks in the kitchen, but the genre often turns into an overhyped, overacted flop. In Lee Daniels' latest flick, The Butler, Oprah Winfrey, Cuba Gooding, Jr., Terrence Howard, Forest Whitaker, Mariah Carey, James Marsden, Liev Schreiber, Jane Fonda, Robin Williams, and more team up to tell the tale of a White House butler who serves from the Eisenhower administration all the way through the Reagan era. The movie may be celebrity overload, but we're willing to deal — because the message is just that powerful.
Advertisement
Through the eyes of Forest Whitaker's Cecil Gaines, a cotton farmer who was able to escape tyranny and work his way up to the household staff of the White House, we witness the struggles of the Civil Rights Movement. Gaines experiences everything from Brown v. Board of Education and the desegregation of public spaces to voting rights demonstrations from an insider's perspective, while his son David (played masterfully by David Oyelowo) sees them through his adversities as an activist, first as a Freedom Rider and later as an early member of the Black Panthers.
It's nearly impossible to watch this movie without experiencing a roller coaster of visceral reactions — terror, disgust, shock, sadness, and, finally, guilt. As educated as we'd like to think we are about the Civil Rights Movement, watching children being hosed by police while attempting to walk to school, or a bus full of activists being attacked by Klan members (carrying signs with messages far too horrifying to warrant re-printing) is like a sucker punch to the gut. Even director Lee Daniels succumbed to the discomfort of it all during shooting. "We were on the bus shooting that infamous scene, on a bridge where black men were actually hung from, and from nowhere come the KKK cursing and spitting and shaking the bus," he said at the film's New York press conference. "I yell 'Cut' and they can't hear me and they continue on, and then for that millisecond I understood what it was like to be them. Not just the black kids, but the white kids who were there, who were willing to risk their lives for freedom...it was that 'aha' moment."
Advertisement 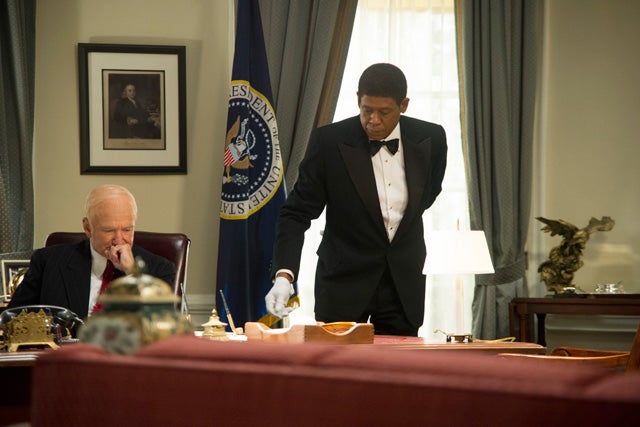 Photo: Courtesy of The Weinstein Company
Most viewers should have their own revelatory moments during The Butler, and we're pretty sure that's the point. As Daniels' proclaimed, "[For me,] it's not a movie, it's a movement." And in times like today, that movement has never been more necessary. For all the (warranted) hype Trayvon Martin's case received, there are a million more inequalities going on every day, whether on a BART platform in Oakland, outside of a club in Queens, or on a quiet neighborhood block in Chicago. It's upsetting that we need a big Hollywood blockbuster to remind us of oppression from a not-so-distant past, but that's the reality of our world. "There is a serious disconnect between today's youth and what happened during the Civil Rights Movement," Cuba Gooding, Jr. explained at the press conference. "We hope that we can squash a lot of that disconnect that young people have that there actually was slavery in America, and that there were white people and black people that died for a cause."
Of course, that's not to say that every aspect of The Butler is a home run. Viewers who lived through the movement will likely balk at the speed in which the film moves — a palatable run time often gets in the way of digging deeper into each plot twist, and not too much time for things to sink in. Many of the movie's characters are there and gone in a flash, robbing the audience of even the slightest chance to become attached (poor Minka Kelly is given but a single line of dialogue as the legendary Jackie O). But, for all its flaws, the message remains. As James Marsden's John F. Kennedy tells Whitaker's Gaines in one of the film's most pivotal moments: "I never understood what you all went through...you've changed my heart." The Butler aims to change the heart of those who need it, and reawaken the souls of the rest of us. The movie opens nationwide Friday, August 16.
Music
Jhay Cortez Steps Into The Spotlight With Timelezz
For years, Jhay Cortez paid his bills by making music for other artists. He was one of the masterminds behind J Balvin’s record-breaking album Vibras in
by Frances Solá-Sant...
Unbothered
Emmys? We Don’t Know Her. These Are Unbothered’s Best TV Shows Of...
The 73rd Primetime Emmy Awards are on Sunday (September 19). The prestigious awards show is usually how Hollywood gauges the best of the best of the most r
by Kathleen Newman-B...
Unbothered
CBS Will Now Turn Its Controversial Activist Competition Series I...
Updated September 16, 2021: After a wave of backlash followed the announcement of its controversial new series, CBS is going back to the drawing board to r
by DarkSkyLady
Advertisement
Entertainment
Selena Gomez Is On The Case
Selena Gomez watches true crime for the same reason many women do: To be prepared.  “In every situation, I automatically think of what I would do to
by Anne Cohen
TV Shows
Wait, Does Bachelor in Paradise End Early This Season?
“This could be the end of Paradise,” one worried contestant says in the promo for the September 21 Bachelor in Paradise episode. No, she wasn&#
by Martha Sorren
Entertainment
Bachelor in Paradise Season 7, Episode 8 Recap: There’s No...
Last week’s episode of Bachelor in Paradise left many in Bachelor Nation hoping for the same thing: Brendan and Pieper facing the same fate as Chris and
by Lia Beck
The Bachelor
Everyone Who’s On Bachelor In Paradise This Season —...
by Martha Sorren
Unbothered
Give The New Generation Of Black Pop Girls Some Time — They’...
On Sunday, September 12, MTV celebrated 40 years of music and music videos at its annual Video Music Awards. The event featured highly anticipated performa
by Ineye Komonibo
Entertainment
Shang-Chi Depicts A World Where Asian Women Can Be Human &...
Spoilers ahead. If there’s one scene from Shang-Chi and the Legend of the Ten Rings I could watch over and over again, it’s Xu Xialing’s introduction
by Roslyn Talusan
Podcasts
This Is What Navigating 2021 Looks Like For Black Women, Accordin...
Go Off, Sis, the podcast from Refinery29’s Unbothered, is back for season 5. And while we’re still in the panorama, the upside is this: We’re finally
by Taiia Smart Young
Unbothered
In Celebration Of Really Love & The Slow Burn
This goes without saying, but dating as a millennial can be a hellish experience. Between extended “talking stages,” ghosting, and starting over every
by Ineye Komonibo
Unbothered
Looking Back, Love Jones Is Actually For The Birds (ItR...
by Kathleen Newman-B...
Advertisement
Advertisement
Discover
R29 Stories & News
Watch
R29 Original Series & Films
Shop
R29's Most Wanted