Pope Francis did something quite un-Pope like over the weekend while traveling back to the Vatican from Rio's World Youth Day. During a press conference aboard his plane, The
Wall Street Journal
reports that the pontiff talked candidly about the Vatican's rumored gay lobby, jokingly saying that if there was one, he has yet to see it "stamped on anyone's ID cards." He then went on to express a certain level of openness towards homosexuals within the Catholic faith: "Who am I to judge a gay person of goodwill who seeks the Lord? You can't marginalize these people."

Advertisement
Now, before anyone busts out their pride flags and takes to the streets proudly proclaiming the Church is LGBTQ friendly, this is merely one quote referencing celibate homosexual priests. Pope Francis' statement is more of an indifference rather than an argument for equal rights — he's not directly coming out and saying the Church embraces the LGBTQ community, but that doesn't mean we brush it off either. It is the first time a Catholic official, let alone the head of the Church itself, has expressed anything other than animosity towards the LGBTQ community. "If someone is gay and he searches for the Lord and has good will, who am I to judge?" the Pope asked.
This might not be a watershed moment for the campaign for equal rights, but to have the Pope openly discuss the topic (whether in reference to a niche group or not) is pretty big. No change will likely come from this, but it's good to see some form of acceptance — even if it's a vague tolerance — emerge from one of the firmest homophobic denominations out there. (The Wall Street Journal) 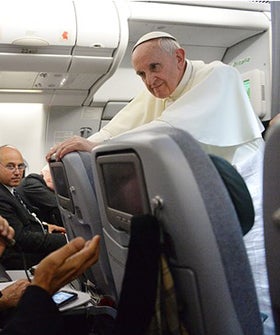 Photo: via The Wall Street Journal
Unbothered
If Your Feelings About The Queen’s Death Are Complicated, That...
On September 8, Her Majesty Queen Elizabeth II passed away at the age of 96, after 70 years as the nation and commonwealth’s monarch. In the days sin
by L'Oréal Blackett
Unbothered
The Most Disrespected Group Online Are Black Women — This CEO Is ...
“The most disrespected person in America is the Black woman…” said civil rights leader Malcolm X, more than 50 years ago. Speaking directly to Black
by L'Oréal Blackett
Abortion
Why Kamala Harris Feels ‘Optimistic’ About The Future...
It wasn’t hard to see the symbolism in the torrential rains that preceded Vice President Kamala Harris’s visit to Indianapolis, IN, on July 25. One mon
by Molly Longman
Advertisement
Unbothered
Why I’m Only A Black Woman On Sundays
I am only a Black woman on Sundays.  Let me clarify.  I am a 21-year-old Black nonbinary person. I was assigned female at birth. My pronouns are
by Reegan Saunders
Unbothered
Mo Farah Bravely Told Us Who He Really Is — Now All Trafficking V...
How do you tell people that you are not actually who they think you are? This week, world-famous British sportsman Mo Farah did so, taking the brave step o
by Banseka Kayembe
Abortion Access For All
“A Minor Victory.” Abortion Care Resumes In Three Trigger States ...
The article is being updated as more news about temporary injunctions and restraining orders impacting abortion access comes out. It was originally publish
by Molly Longman
Unbothered
On Ketanji Brown Jackson, ‘Making History,’ And The Expense Of Bl...
Update: Justice Ketanji Brown Jackson has been sworn in to the Supreme Court as the first Black woman sitting on the nation’s highest court. Jackson
by Brea Baker
Abortion
Support Abortion Access With R29’s Capsule Tee Collection
As of June 24, our constitutional right to abortion no longer exists. It’s hard not to feel helpless, angry, and scared during a time like this, but for
by Elizabeth Gulino
Somos Latinx
Why We Need To Claim Abortion As A Word Without Stigma
I was 16 years old when I had my first abortion. I’d been sexually assaulted and got pregnant. I told my mom that I needed an abortion and she said no. S
by Stephanie Loraine...
Abortion Access For All
9 Posters To Bring To Your Next Abortion Rights Rally
It’s official: The Supreme Court has overturned Roe v. Wade. On June 24, people started gathering to protest against the loss of our Constitutional r
by Elizabeth Gulino
Abortion Access For All
How To Access Abortion Care Post-Roe
This story has been updated to reflect the overturning of Roe v. Wade by the Supreme Court. The Supreme Court has decided to overturn Roe v. Wade, the 1973
by Molly Longman
Abortion
What Abortion Rights Will Look Like in Your State
In a 6-3 opinion, the United States Supreme Court has overturned federal protection for abortion. While the upcoming ruling was expected, it’s only the b
by Neda Toloui-Semnani
Advertisement
Advertisement
Discover
R29 Stories & News
Watch
R29 Original Series & Films
Shop
R29's Most Wanted