Skip navigation!
Story from Washington, D.C.
It looks like NBC has finally found a suitable doppelgänger for Hillary Clinton. The network announced that Oscar-winning actress Diane Lane will be playing the former Secretary of State and fellow Twitter aficionado. Rumors that Carey Mulligan was slated for the role were buzzing back in June, but were swiftly shut down — and for good reason. Not to push Mulligan to the side, but Lane has the hard-hitting grace that makes Clinton such a knockout when it comes to leadership.
There's no word as to who's playing Bill, or even a solidified release date, for that matter. The script is still in the works, but NBC is hoping to get it out before Hillary announces her 2016 presidential campaign (if she runs at all). But, since Anna Wintour's basically given her the go-ahead, it's very likely to happen, naturally. (E! Online) 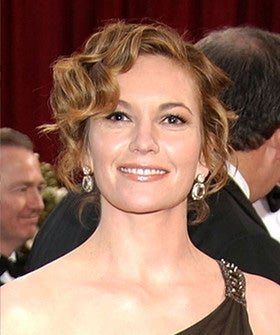 TV Shows
So, You Finished The Queen’s Gambit? Watch These 1...
by Lydia Wang
Black Friday
Snag Your Hulu Monthly Subscription For Under $2
Hulu (aka Netflix’s ultimate streaming rival) has officially tossed its hat into the Black Friday 2020 ring. For the next three days, new customers c
by Alexandra Polk
TV Shows
Here’s How Long You’ll Have To Wait For New Flight...
Kaley Cuoco is probably best known to most TV viewers her role on The Big Bang Theory, but now she’s executive producing and starring in an HBO thril
by Kelly Schremph
Entertainment
The Flight Attendant‘s Soundtrack Will Get You To ...
by Natalie Morin
Christmas Movies
27 Romantic Christmas Movies You Can Stream Right Now
by Rosie Knight
Entertainment
Lovers Rock Is The Most Magical Sexy Party Of The Year (...
Exactly 34 minutes and 38 seconds into Lovers Rock, something magical happens. Lovers and friends attending a 1980 house party are dancing to Janet Kay’s
by Anne Cohen
Christmas Movies
17 Holiday Movies Streaming On Hulu Right Now
by Gina Vaynshteyn
Entertainment
Happiest Season’ Soundtrack Celebrates LGBTQ+ Musi...
by Lydia Wang
TV Shows
17 Tiny Details To Look For During Your Annual Friends Tha...
Your Thanksgiving traditions more than likely include turkey, cranberries, stuffing, maybe a casserole or two, and watching all 10 Friends Thanksgiving epi
by Rachel Paige
TV Shows
Fasten Your Seatbelts: A Guide To The Flight Attendant C...
by Natalie Morin
Thanksgiving
20 Pop Culture Quotes That’ll Hit The Spot For Your 2020 Th...
by Shannon Carlin
TV Shows
These Are, Hands Down, The 40 Best Thanksgiving TV Episodes
by Shannon Carlin
Discover
R29 Stories & News
Watch
R29 Original Series & Films
Shop
R29's Most Wanted