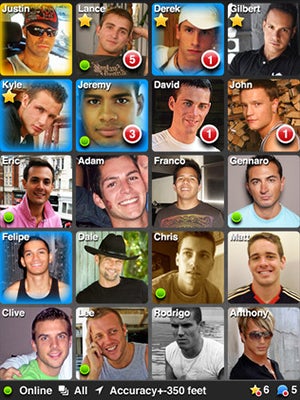 If you're a gay man or you're friends with one, you most likely know about a little app called Grindr. Some have dubbed it "The Yellow Facebook" with the irony being there are more headless, ripped torsos than actual faces, but we'll go with it. It's notoriously become the go-to gay cruising app similar to Man Hunt (which also launched their own smartphone app), helping users find their closest partner for a night. That is, until Grindr surveyed 2,000 users and found out the majority of those tiny, shirtless avatars are actually looking for love rather than a night's worth of lust.
Seventy-seven percent of those polled want to get married, 76 percent want kids, and 60 percent are romantics believing their soul mate really exists. We're pretty thrilled to see users want to find love in a seemingly hopeless, sexed-up place! Some already have, too! Four percent of those polled are already married, which seems odd, but we're not going to question their reasoning behind having a Grindr profile — they probably just want to find friends. (BuzzFeed)

Gift Guides
24 One-Of-A-Kind Gift Ideas To Shop, According To Your Zodiac Sign
by Us
Sex Tips
How To Make Car Sex Actually Sexy
by Kasandra Brabaw
Dedicated Feature
Here’s What It’s Really Like To Confront The Realitie...
Before she’d reached age 35, Cara* had endured tumor-removal surgery, chemotherapy, a double mastectomy, and reconstructive surgery. “When you&
by R29 Editors
Fitness
8 Fitness Gift Cards For Your Virtual Workout Crew
by Cortne Bonilla
Sex
How You Get Wet, Why You Get Wet, & How To Stay Wet
When it comes to sex, “getting wet” doesn’t refer to getting busy in the shower or having sex on the beach. Instead, it’s about natural vaginal lub
by Erika W. Smith
Sex
How To Have Period Sex That Doesn’t Look Like A Crime Scene
Period sex can be bloody, it can be messy, and it can be incredible. The hormonal changes that come with your period mean that you might see surge in their
by Erika W. Smith
Marijuana & Culture
23 CBD Gifts To Give This Holiday Season
by Sara Coughlin
Coronavirus
The U.K. Approved The Pfizer Vaccine. What Does It Mean For The U...
The U.K. has slingshot ahead of the U.S. to become the first country to grant emergency use authorization (EUA) for a coronavirus vaccine that has bee
by Molly Longman
LGBTQ+
Elliot Page Inspired Trans Joy — TERFs & Transphobes Can’t Take T...
When Elliot Page, the Oscar-nominated star known for Juno, Whip It, and Umbrella Academy came out as trans yesterday, my whole Twitter timeline rejoiced at
by Elly Belle
Eating Disorders
Here’s Why Bachelorette Star Ben Smith’s Openness About Hi...
Tayshia Adams’ season of The Bachelorette had a rocky start — remember Clare and Dale? But now, it’s shaping up to be one of the best seasons
by Elizabeth Gulino
Fitness
The Rise Of The Lunchtime Workout
This year, the fitness industry changed radically. So did the way we work out — we went from sweating in The Red Room to sweating in our studio apar
by Molly Longman
Dedicated Feature
Here’s An Important Reminder To Listen To What Your Body Ne...
It’s fair to say that many of us have been experiencing worse-than-normal brain function lately, given our attention has been occupied by reacting to
by Chelsea Peng
Discover
R29 Stories & News
Watch
R29 Original Series & Films
Shop
R29's Most Wanted