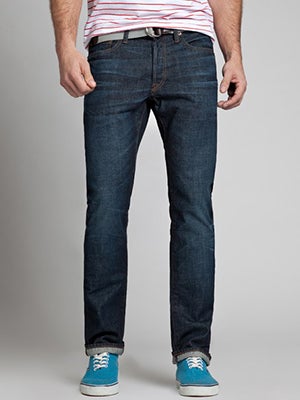 Until now, Facebook's very basic advertisement strategy was more or less the same as Netflix's — an algorithm that monitors what you like, post, and frequent, then uses that to generate ads geared specifically towards you. They've rarely been intrusive, living mostly on the sidebar of your news feed, but that's slowing beginning to change as the company seeks a profitable edge to stay relevant.
Companies like the jean brand Bonobos, are sponsoring posts that, in one user's experience, stayed at the top of their feed for two weeks. But not just any post. They're picking your own personal, organic status updates, and paying to keep them in your friends' line of view.
Advertisement
BuzzFeed's Charlie Warzel recounts a situation in which a Bonobos post began as a perfectly normal update, and turned into a source of serious annoyance and controversy. Basically, a friend of Warzel's "gave in" to an ad by the denim brand and decided to buy a pair, sharing it on his Facebook page. Bonobos noticed and paid to sponsor the post, making it a permanent staple at the top of Warzel's and his network's feeds. Comments on the thread quickly went from annoyance to downright desperation, with some users offering to pay the company to remove the post. "This is the Facebook version of an STD," one commenter wrote.
As annoying as an ad like that can be, Warzel points out that it doesn't violate any of Facebook's policies so it's not necessarily their fault, but they are allowing for ads like this to happen. Is it intrusive? A little. Rather than hanging out in the sidebar like we're used to, these ads are smack dab in between our friend's status updates and cat memes — and they're tricking readers into thinking they're just innocent posts from friends, rather than advertisements. We get what a company like Bonobos is trying to do — increase their exposure to gain more consumers, but in this case, they're doing more harm than good. (Buzzfeed)