Skip navigation!
Story from Entertainment
Adele is (reportedly) back at work. It seems that rather than kick back and relax with her new family and recent award-show successes, the singing sensation is holed up in the studio with producers James Ford and Kid Harpoon. James Ford produced Florence and the Machine’s albums, Ceremonials and Lungs, while Kid Harpoon also worked on tracks on the Ceremonials album and on Jessie Ware’s album, Devotion.
We wonder what the pressure must be like on the singer to recreate the multi-million record selling success of 21? Especially since back in 2011, she made it clear that it would take a lot for her to come back with a third album: “I’ll disappear and come back with a record when it’s good enough.”
Advertisement
If you count “disappearing” as moving to Los Angeles for a brief period, then she has stayed true to her word, though we wonder how the happiness she has found in her personal life will influence her new music. Could an upbeat Adele album be in our future? Hard to wrap your head around it, no? (The Sun) 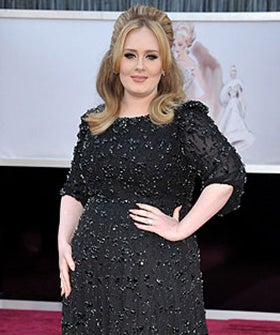 Photo: Via The Sun

Advertisement
Pop Culture
Raven Gates Has One Simple Reason Not To Invite Rachel Lindsay To...
The feud between Raven Gates and Rachel Lindsay has deeply confused those who keep up with Bachelor Nation — mostly because neither party can give a spec
by Kaitlin Reilly
Best of Netflix
Netflix’s Ares Pulled Off The Most Disturbing Finale...
Warning: Major spoilers ahead for Netflix’s Ares season 1 finale, “Episode 8.” Once upon a time, American Horror Story could serve up a truly hor
by Ariana Romero
TV Shows
That Hilarious Prince George Instagram Account Is Coming To Life ...
Writer and producer Gary Janetti has made a living creating some of television’s funniest stories, and he’s upping the ante in 2020. The writer’s
by Ineye Komonibo
Pop Culture
Sabrina Couple Confirms Their Relationship On TikTok, As G...
It sounds like Chilling Adventures Of Sabrina‘s many love triangles has affected the set. After rumors and cheeky Instagram posts, actors Ross Lynch
by Kathryn Lindsay
Pop Culture
Brad Pitt Plans The Best Dates, According To Dax Shepard
After their sweet run-in at the SAG Awards (and Netflix after party) this Sunday, the world is once again searching for sparks between Jennifer Aniston and
by Kaitlin Reilly
Pop Culture
Pamela Anderson Secretly Marries A Star Is Born Producer
Love can happen at any time — just ask Pamela Anderson. The Baywatch star recently married Jon Peters (the producer of critically-acclaimed film A Star I
by Ineye Komonibo
Entertainment
Taylor Swift Agrees Cats Is A “Weird-Ass Movie”
For a movie as CGI-ed as Cats, I assume the actors were just as surprised as we were when watching the musical adaptation for the first time. The Tom Hoope
by Kathryn Lindsay
Pop Culture
Meet Archie’s Godparents: Tiggy Pettifer & Mark Dyer
When Prince Harry and Meghan Markle celebrated the birth of their firstborn son Archie Harrison last May, the couple decided to forgo the usual protocol su
by Ineye Komonibo
Movies
Alison Brie’s Horse Girl Movie Is Actually AboutR...
When Netflix first announced the Horse Girl movie, I’m sure we all pictured the same thing: a My Friend Flicka meets Free Reign situation that you an
by Kathryn Lindsay
The Bachelor
The Bachelor Is In A “Genuine & Real” Crisis
“Cheers to being real as fuck,” Alayah Benavidez announces at the midpoint of her Bachelor “Week 3” rollercoaster. If this installment of The Bache
by Ariana Romero
Entertainment
Why Selena Gomez Made Sure Women Were All Over Her New Record, Fr...
There were some huge moments for women in music in 2019. Billie Eilish became the youngest woman ever to be nominated for all four of the top Grammy Awards
by Courtney E. Smith
Pop Culture
Prince Harry & Meghan Markle Have Officially Begun Living Their N...
Prince Harry and Meghan Markle’s royal version of retirement has officially kicked off — and it sounds so idyllic. While Meghan left for Canada in
by Kathryn Lindsay
Discover
R29 Stories & News
Watch
R29 Original Series & Films
Shop
R29's Most Wanted