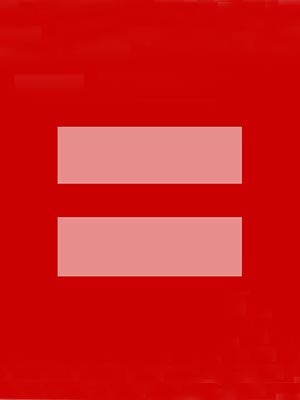 Last Tuesday, nearly 2.7 million Facebook users changed their profile pictures (us included!) to the red equal sign, in a show of support for the Human Rights Campaign's fight for gay marriage. 2.7 million users, guys — that's huge! According to Facebook, that's a 120% increase of profile activity compared to the week prior. And, while a Supreme Court verdict could still go either way, the red sea of profile pictures has only expanded. What's the big deal, though? It's just a few clicks of your mouse; a mindless action, really. But, as The Verge astutely points out in this article, that's kind of the point.
Advertisement
The argument against this digital movement is that it's a substitute for real action and concrete change. Like the whole KONY fiasco, it's easy for the issue to become a blip on the radar and promptly disappear into nothingness. That kind of fleeting activism and subsequent indifference doesn't do much harm, but it doesn't do much good, either. But, as Jessica Feezell pointed out in her 2009 essay on Facebook's effect on political engagement, grassroots social media movements really do make a difference. "Opinion change is difficult," she writes, but "reinforcement and mobilization are easier." So, that is why the red equal sign works.
Unlike the KONY 2012 video, HRC's symbol doesn't try to force people to change their opinions — instead, it focuses on the positive, allowing people to express support in a simple manner that seems minute, but amounts to a whole lot (of red) on a macro-level. The seemingly mindless act of changing a profile picture has the power to instigate change, because it's a message of support that comes directly from friends and family, rather than a third party organization. It even creates an online environment that encourages people to voice their support in a familiar, safe setting. Plus, Facebook doesn't have a "Dislike" button (imagine if they did — the horror!), meaning users can only "Like" the change, ignore it, or comment on it. And, while statistics are great, we all know that a picture is worth a thousand words. So, in this case, the ubiquity of the equal sign is confirmation that this battle — in the court of public opinion — has already gone a long way towards being won.
And, since this grassroots movement took off, real changes have happened. Two GOP senators have voiced their support for same-sex marriage, prompting Chief Justice Roberts to tell a proponent, "As far as I can tell, political figures are falling over themselves to endorse your side of the case." The Verge reports that even right-of-center lawmakers and politicians have changed their Facebook profile pictures upon seeing how widespread the trend has become. It's small-scale political engagement made big by the very thing HRC is fighting for: Connecting people. (The Verge)