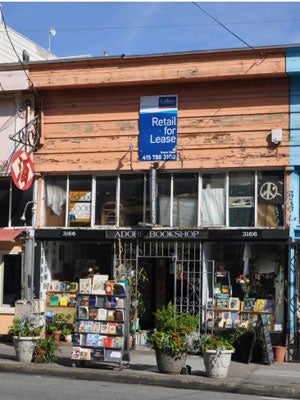 In case you aren’t completely clued in, there have been whirlwinds of whispers about the legendary tome spot Adobe Bookshop struggling to stay afloat in S.F.’s cutthroat real-estate market. And, in a classic David versus Goliath situation, the 16th Street store has been fighting off menswear joint Jack Spade (owned by Liz Claiborne) from coming in and swooping up its space for months.
After the landlord outrageously raised the rent from $4,500 to $8,000, the store quickly bounced back by sourcing upwards of $60,000 on Kickstarter to cover the expenses for some time. Well, despite those efforts, it’s a sad day (and no this is not an April Fools joke). According to Uptown Almanac, Adobe Bookshop has just been served its final eviction notice and is ordered to be out by June 15. Locals and shoppers alike are outraged, especially after the immense community involvement of trying to preserve the iconic Mission outpost. Pouring out a little liquor on this Monday morning for Adobe Bookshop. No word yet on when Jack Spade will move in! (Uptown Almanac)