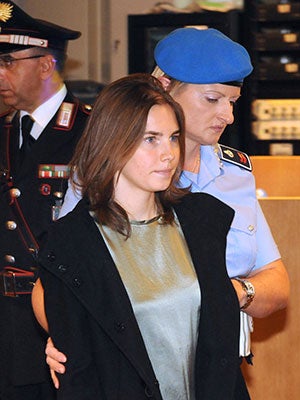 After being tried, convicted, and subsequently acquitted for the murder of her roommate, Amanda Knox — whose case caused a major stir in public opinion, both in Italy and in the states — is now facing a third retrial.
The Court of Cassation, Italy's highest court, will look into the overturned guilty verdict for Ms. Knox and her boyfriend Raffaele Sollecito. The new ruling does not call for her rearrest, and The New York Times reports that she will likely remain at home rather than return for the trial. Only if the court upholds her initial conviction will she face extradition to serve her sentence in Italy. The Court of Cassation will look into the validity of procedure in this case, the use of DNA evidence in particular, which was crucial in the appeal of the guilty verdict. Knox's lawyer, Carlo Dalla Vedova, says that double jeopardy laws would not apply in her case because no final ruling was made.
As you certainly remember, if you were ever on the Internet or watching TV during the first round of the case, this has been a complete field day for both American and Italian media, who have alternately portrayed Knox as a victim of a corrupt justice system and a participant in a satanic orgy. The prosecution claims that DNA unjustly trumped other damning evidence in the case during the initial appeal, saying that the acquittal was “violation of the law and a monument to illogicality.” What do you think? Is this just asking for another media circus, or is Knox looking at a long stay in an Italian cell?