Skip navigation!
Story from San Francisco
If you've studied up on the latest intel from social wunderkind Pinterest, you know its main demographic skews a bit older, and more rural, than most social media sites. While Twitter is all about who's who in NYC and L.A., image-heavy Pinterest draws lots of users in between our two fair coastal cities.
Given that knowledge, you'd think that the top users — you know, those regular Janes with millions and millions of followers — would spend their days in the Midwest, the South, anywhere but big coastal cities. Surprisingly, that's not true, according to data collected by HelloSociety. While it's certainly not as concentrated around NYC as some social sites, the biggest users still tend to live in major metropolitan areas.
Advertisement
We like to think that a love of minimalist living rooms, flower crowns, and braids is something anyone can get behind. But when it comes to Pinterest's coolest, it looks like that old stereotype about city kids is truer than we once thought. According to Kyla Brennan, CEO of the agency that compiled the data for this infographic, “this is largely a matter of trendsetters vs. trend-followers. It shouldn’t come as a huge surprise that while the majority of pinners may reside in Middle America, the most influential ones live in the cities where trends are set. Pinterest is a place for discovery, and it would be hard to discover lots of exciting new things if you’re only following people just like yourself who live similar lifestyles in similar places.” (Social Times) 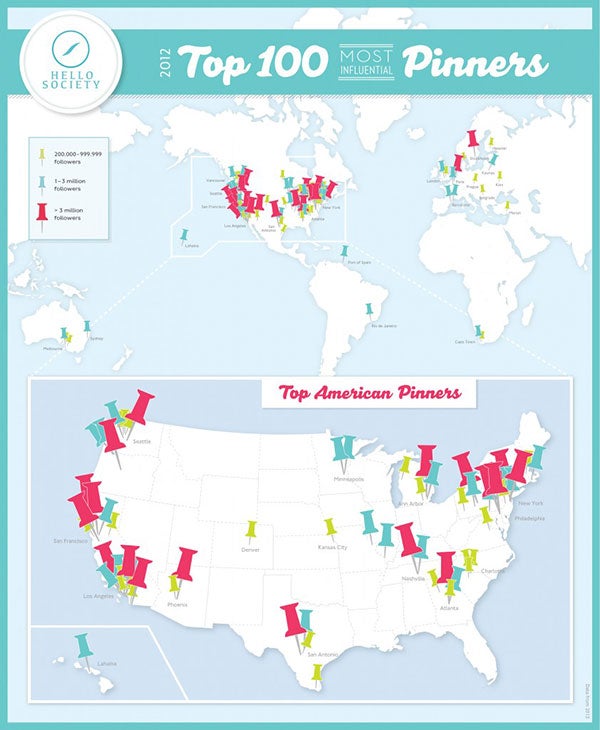