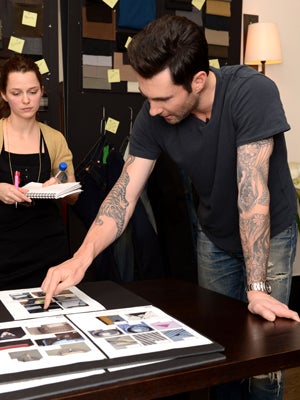 As lead singer of Maroon 5 and an international heartthrob, Adam Levine spends a lot of time shirtless. It's part of the job. That's why we found it slightly ironic when we heard he was coming out with an exclusive clothing line for Kmart and Shop Your Way. But the more we hear about the project, the more interesting it gets.
Levine has actually been pretty hands-on in the process. And when it comes to his inspiration, he's going halfsies between a giant mood board of rugged Old-Hollywood actors, as well as photos and tips from fans themselves! We caught up with the star in between design sessions to find out what he really thinks when it comes to women's clothing, first-date attire, and, of course, being among the most-naked guys on the Internet.
Advertisement

How do you want your line to be different from other celebrity clothing lines?

Is there anything your fans could suggest that you'd have to veto?

"Probably a lot of things, but for every ten weird things there’s always one good one; for every fifty bad ones there’s always two good ones, you know? There are a million different ideas out there — I’m just trying to find the right one. Any way the fans can contribute to the creative think tank is a good thing."

Any particular fan uploads so far that you really liked?

"I can’t be giving away all my secrets! I have to leave something to the imagination.

Do you prefer to be shirtless or shirted?"

"I think it’s hilarious that anyone wants to see me shirtless. It’s so funny. Maybe I’ll make a clothing-less line. It’ll be the most unique line ever: how to present nudity. I’m going to have to work on that. It’ll be very avant-garde, very advanced. I’m not sure the world is ready for that yet."

That’s heavy stuff. Your line is menswear, but is there anything you like to see or don’t like to see on a woman?

"I think women look great wearing men’s watches — a big, chunky watch. Men’s shirts also look good on women...just the shirt, that's what I prefer. There’s a lot of mixy-matchy things that you could make into unisex that I’m sure we could work on."

Is there anything a woman could wear that’d be a turnoff for you?

"Too much perfume and too much makeup. Yuck."

What would you wear on a first date?

"Well, it depends on what you’re doing. I always like to dress up in a tuxedo and tell the girl to dress real fancy. I like to pick her up and go to McDonalds in a tuxedo."

Does that usually go over well?

"It’s my move. You don’t have to shell out a bunch of money on the first date."

Well, you already paid for the tux…

"It’s a good, spontaneous, romantic thing you can do that’s also cost-effective. What if you don’t like the person? It’s only the first date. It’s the first time you’re hanging out — do something quirky and romantic. You don’t want to show it all off on the first date, you know? Dress fancy, but go to McDonalds. Her world will be so rocked. You might be able to take her to the opera afterwards. If you don’t like her, you can just take her home."

Oh, okay, so you will take her to the opera afterwards?

"If it was a nice date and you had a good time eating your french fries and Big Mac in your tux, yeah! It’s all funny. If you don’t like the person that much and you can tell it’s not going well, then you just drop ‘em off and they'll think it was really sweet, really cool. If you like them, you take them to the opera. I’ve never been to the opera by the way. I don't know what I'm talking about."

What’s your favorite tattoo? ...It doesn’t have to be a visible one.

"My lucky number, 222. It's also the name of the new line. That’s not coincidental. It’s just my lucky number. I don’t know, I just chose it when I was fourteen because it was showing up everywhere."

Want to put your stamp of approval on Adam's clothing line? Upload your suggestions, inspirations, and more here.

Best Men's Gifts
Small Gifts For Men That He’ll Happily Receive Via Stocking
by Lourdes Avila Uribe
Celebrity Style
Timothée Chalamet’s Fan-Made T-Shirt Is The Real Star Of His Rece...
At this point, meeting someone who isn’t obsessed with Timothée Chalamet and his ever-changing style is rare. But only a select few of his fans go the e
by Eliza Huber
Shopping
The Best Gifts For Each & Every Man In Your Life
by Ray Lowe
Advertisement
Fashion
30 Gifts For Men That Won’t Lead To A Breakup
Here's to another year together!
by Christina Holevas
Mens
Mario Testino Is Accused Of Sexual Misconduct
Celebrity and fashion photographer Mario Testino is accused of sexual harassment and assault by several male models and three photo assistants, according t
by Meagan Fredette
Fashion
The Instagram Shop That Sells Heels — For Men
Down the sidewalks of Bushwick, Brooklyn, strut Henry Bae and Shaobo Han, the founders of Syro, an Instagram shop that makes heels for men. The thing is, y
by Landon Peoples
Fashion
If Men In Heels "Freak You Out," Then You're Part Of The Problem
I remember the first time I wore heels. Of course I do. And I remember the first time I fell out of them, too. It was a pair of sandal wedges — Mudd, I b
by Landon Peoples
Fashion
Michelle Obama Reveals Barack Is (Gasp!) An Outfit-Repeater
It's hard to believe we missed this one.
by Sarah Midkiff
Fashion
Maison Margiela Invites You To Scribble On Its $500 Sneakers
The sneakers are available now at End Clothing and according to the website, they also come with a “branded marker pen.”
by Marquita Harris
Fashion
This Kickstarter Wants To Make Rompers For Men A Thing
It already met its goal on the crowdfunding site.
by Ana Colon
Mens
30+ Gifts For Guys That Will Make Your Man Feel All The ...
by Landon Peoples
Mens
Why This ASOS Launch Is A Very Big Deal
If you thought the shopping clickhole that is ASOS already had it all, prepare to have your mind blown. While the site is probably the only place you can g
by Christopher Luu
Advertisement
Advertisement
Discover
R29 Stories & News
Watch
R29 Original Series & Films
Shop
R29's Most Wanted