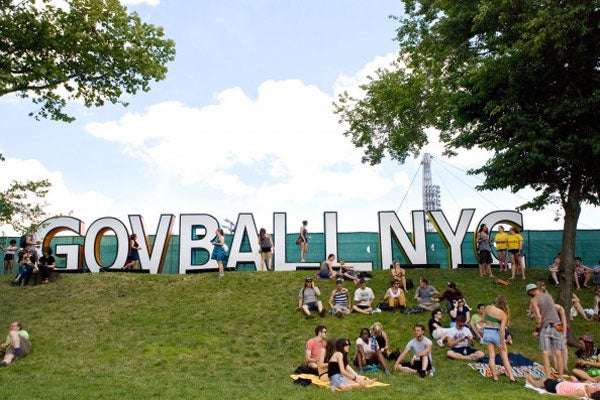 We know, summer is so far away. But, it's time to start gearing up for festival season — after all, what's better on a frigid day like today than dreaming about getting your groove on under the hot sun? While the Coachellas and Ultras of the world may be a bit out of our price range, we've got one seriously awesome music get-together right here in NYC — and this year's lineup knocks it out of the park.
While we already knew that the 2013 Governors Ball would be expanded to a three-day extravaganza, we just got word that confirmed acts include Kanye West, Kings Of Leon, and Pretty Lights. Kanye and KOL will be headlining (along with a third yet-to-be-named act), with appearances from the likes of Grizzly Bear, Edward Sharpe, and The Lumineers. Early bird tickets will go on sale this Friday at noon, so you can bet we'll be first in line.
Unbothered
Heat Things Up With Simon & Schuster And Unbothered’s Black Love ...
What makes a good soundtrack to a love story? That’s the question we asked authors Ashley M. Coleman (Good Morning, Love), Ebony LaDelle (Love Radio), an
by R29 Unbothered
Entertainment
New Netflix Series Savage Beauty Tackles The Global Colori...
This story includes spoilers for Netflix series Savage Beauty. In the wake of the overwhelming success of popular series Blood & Water, Netflix’s cat
by Ineye Komonibo
Entertainment
Laverne Cox’s Barbie Couldn’t Have Come At A More Critical Time
After a Barbie-less childhood and on the advice of her therapist, Laverne Cox bought her first doll of the iconic American toy brand in 2010 — at the age
by Katherine Singh
Advertisement
Unbothered
How The Black Pearsons Became The First Family Of This Is Us<...
For six years, the Pearson family of 'This Is Us' have broken our hearts — and healed us — all at the same time. This is an oral history of the Black
by Kathleen Newman-B...
Entertainment
Francia Raísa Gets Grown: The How I Met Your Father Star...
“Thursday is the new Saturday,” Francia Raísa declares as soon as we get on the phone. “Friday is the day to chill. Let’s be real.”  She ha
by Mekita Rivas
TV Shows
In Conversations With Friends, Everyone’s Insufferable
Deep into Hulu’s Conversations With Friends, there comes a moment of reckoning. Frances (Alison Oliver) — a Dublin-based university student in her earl
by Katherine Singh
TV Shows
The Flight Attendant’s Cassie Is An Example Of White Pri...
In the season 2 premiere of The Flight Attendant, Cassie Bowden (Kaley Cuoco) is still working as a flight attendant for Imperial Atlantic, but now she’s
by Harika Manne
Unbothered
White Supremacy Is To Blame For The Buffalo Massacre. That’s It.
A clip of CNN reporter Victor Blackwell breaking down in tears live on air while talking about last weekend’s horrific massacre of 10 Black people in a B
by Kathleen Newman-B...
Unbothered
Kendrick Lamar Made His New Album For Himself — Not Us
After the 2017 release of his Grammy-winning album DAMN, Kendrick Lamar seemingly vanished into thin air, leaving fans begrudgingly stuck in a loop of list
by Ineye Komonibo
Unbothered
The Wilds Season 2 & TV’s War On “Woke” Characters
Welcome to “What’s Good,” where we break down what’s soothing, distracting, or just plain good in the streaming world with a “rooting for everybo
by Kathleen Newman-B...
Entertainment
Reality TV Is One Of The Most Feminist TV Formats Today. Hear Me Out
Reality TV is a genre that typically features women screaming at each other (The Real Housewives franchise), simpering and competing for the affections of
by Sirin Kale
Somos Latinx
Neruda on the Park Gets the Story of Gentrification in L...
Many have taken on the task to articulate the complexity and harm of gentrification in immigrant, mainly Black and Latine, communities. In just the past fe
by Lorraine Avila
Advertisement
Advertisement
Discover
R29 Stories & News
Watch
R29 Original Series & Films
Shop
R29's Most Wanted