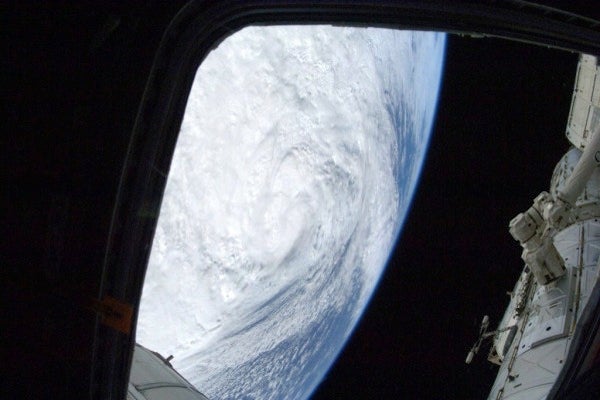 We can't put it off any longer. First, there was the whole Governor Cuomo thing, and this Businessweek thing, and then yesterday, there was Mayor Bloomberg's endorsement of Obama, on the grounds of climate change. But what does it all mean?
Well, before we even begin to touch on this immensely complex issue, it's important to note that right now, nobody can say for sure whether or not climate change was a direct cause of Hurricane Sandy. So many factors go into creating a super-storm like this, and meteorologists' understanding of these factors is neither complete nor perfect. Author and environmental expert Andrew Revkin clearly stated that "there remains far too much natural variability in the frequency and potency of rare and powerful storms — on time scales from decades to centuries — to go beyond pointing to this event being consistent with what’s projected on a human-heated planet."
Advertisement
On the other hand, in a discussion with Revkin on The New York Times' Dot Earth blog, respected environmental activist Dan Miller made the following objection: "No one is saying that a Hurricane Sandy would not have happened if not for climate change. But I believe there is little doubt that the record-breaking scale and potential destructiveness of Sandy is due in large part to the amplifying effects of warmer ocean temperatures, higher atmospheric moisture content, and unusual Arctic weather patterns." Both make convincing cases, and both use scientific data to support their convictions.
There is, if nothing else, anecdotal evidence that suggests these types of storms are becoming more frequent. We're sure we're not the only ones to think "hmm, sounds familiar" when the "Frankenstorm" media hype began last week. In fact, we know we're not: During a speech on Tuesday morning, as we mentioned before, New York Governor Andrew Cuomo said very frankly, "There is no weather pattern that could shock me at this point," and then proceeded to be the first politician to clearly and openly link this storm to climate change.
His meaning was clear. New York City needs to get used to this kind of thing happening more and more often, because it is happening, for whatever reason. Once upon a time, the high rises and subway stations built on top of a filled-in swamp on the precipice of corrosive saltwater could exist in blissful ignorance of weather-disaster preparedness. Once upon a time, this used to be a once-in-a-lifetime kind of thing. That's just not true anymore.
Advertisement
If you still don't believe it, consider the fact that oil companies and international governments are scrambling to seize the immensely profitable resources that will emerge in the near future as a direct result of melting ice caps. Of course, there's nothing like a disaster to get people pointing fingers of blame. Maybe citizens and government alike will be more concerned about the practical impact of climate change in the future — or maybe a moment of increased awareness will be followed by a continued, tense radio silence.
No, we're not experts. And yes, many of us at R29 have found ourselves at the center of the storm over the past few days, so maybe the hairs on the backs of our necks are extra-raised due to personal experience. But, while climate change was certainly on all of our minds because of this extreme weather event, Governor Cuomo's flat-out statement followed by Bloomberg's own political move, was at once jarring in its boldness and daunting in the suggestion that things have finally gotten bad enough — real enough — that the government just can't ignore it any longer.
As fellow non-expert residents of planet Earth, what do you think? Is this just the usual superficial alarm, bound to fade as soon as the power's back on? Or has climate change finally been thrust in our faces enough to make it a central issues in next week's election, and more importantly, the years that follow?

Furniture Guide
Rattan Is The LBD Of Interior Design — Here Are 17 Items Worth Bu...
If you were to gab to a seasoned interior designer — hell, even an amateur one — that rattan furniture is taking over TikTok, boy would their eyes roll
by Alexandra Polk
Guide To Great Sleep
The Best Linen Sheets To Buy For Cozy But Breathable Sleep
by Amanda Randone
Living
A Week In Brooklyn, NY, On A $197,000 Joint Income & Life Insuran...
Welcome to Money Diaries where we are tackling the ever-present taboo that is money. We’re asking real people how they spend their hard-earned money
by R29 Team
Advertisement
Most Wanted
This Bougie Dry Dog Food Has My Pup’s Tail Wagging Nonstop
Ever since adopting my rescue pomchi Miso, I’ve realized the joy that comes with treating your pet like family — and for me, that begins with
by Karina Hoshikawa
Not Your Token Asian
South Asian Women Are Deleting Dating Apps & They Couldn’t ...
Every few weeks, Malvika Sheth can be certain of one thing — she’s going to get a reminder from her parents. It might come through a WhatsApp message,
by Katherine Singh
Not Your Token Asian
Sex, Drugs & Alcohol: Korean Americans Find Success In The Taboo
“What do you want to be when you grow up?” This question, commonly posed to young kids, can have no wrong answers. Well, except maybe if the people ask
by Jasmine Ting
Second Gen
Grieving Together, But Apart: How I Set Boundaries When My Father...
Last June, as I decorated the hallway of my home with yellow and blue balloons for my master’s graduation, my uncle called to say that my father had pass
by Sarah Samuel
Money Diaries
A Week In Los Angeles, CA, On A $125,000 Salary
Welcome to Money Diaries where we are tackling the ever-present taboo that is money. We’re asking real people how they spend their hard-earned money
by R29 Team
Somos Latinx
The Introvert’s Guide to Running a Business
The L-Suite examines the diverse ways in which Latinx professionals have built their careers, how they’ve navigated notoriously disruptive roadblocks, an
by Yara Simón
Most Wanted
Clink, Clink: We Found The Best Drinking Glasses For Spring
Whether you’re a mocktail mixer who only sips inside with the AC blasting or a wine enthusiast who pairs every bottle with an al-fresco breeze, the n
by Alexandra Polk
Living
I’m Kicking Off My Thirties With A Ride On The Wild Side
“You’re doing what??” My mom asks, brow furrowed, when I tell her that I’m flying from New York to Laguna Beach, California to speed down the Pacif
by Ineye Komonibo
Home
The Collab We Never Knew We Needed: Our Place & Selena Gomez
As the kids would say, we did not have actress, singer, and entrepreneur Selena Gomez collabing with Our Place on our 2022 bingo cards — but we accept it
by Alexandra Polk
Advertisement
Advertisement
Discover
R29 Stories & News
Watch
R29 Original Series & Films
Shop
R29's Most Wanted