Skip navigation!
Story from San Francisco
In a move that certainly left many Star Wars fans stunned, George Lucas announced yesterday that Disney is acquiring his super-cinematic, Marin-based empire, Lucasfilm, for a neck-snapping $4.05 billion. Following in the footsteps of Pixar and Marvel, this means Disney will foster control of the film company and continue to produce Star Wars flicks every two to three years — the first is already slated to come out sometime in 2015. Oh, and yes, now Disney owns all of Lucasfilm’ assets, ILM and Skywalker Sound included. Wowza!
So, what exactly does this mean for the entire Star Wars franchise? It’s probably too soon to tell, but Lucas has already voiced that he will be stepping down from the day-to-day operations, but will still serve as a creative consultant. We’re interested to see the developments the mouse house will implement. Fans, weigh in — are you excited, bummed, apathetic? Tell us below in the comments! (Forbes) 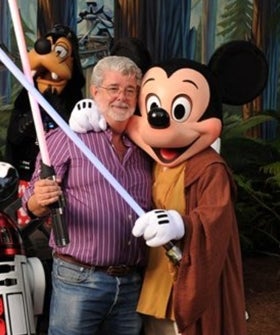