If you’ve been online at any point over the last year, you would be forgiven for thinking that the fashion world has gone tennis mad. On Instagram, all the coolest girls are sporting some sort of tennis skirt, from classic, thigh-skimming, pleated numbers to sleek, logo-embossed, a-line designs. TikTok is awash with 'how to style' videos (so far, #tennisskirt has racked up an impressive 13.2M views), and Depop — ever a barometer of social media trends — witnessed a +175% increase in searches for ‘white tennis skirt’ last summer alone. Nike’s Court Victory skirt (undoubtedly the trend’s runaway success) has earned itself cult-like status, selling out across sportswear retailers and a making its way onto Lyst’s top ten Q2 2020 Hottest Women’s Products list. As one Twitter user jokingly summed it up, “Girls don’t want a boyfriend. Girls want the Nike tennis skirt.”
Advertisement
According to Anabel Maldonado, fashion psychologist and founder of psych-based e-commerce platform PSYKHE, the last year of lockdowns have had a lot to answer for when it comes to the tennis skirt’s meteoric rise in popularity. “When so much is suddenly out of our control, as it has been since the onset of COVID-19, I think there has been a mass collective refocus on things we can control, a going back to basics of sorts,” she notes. “Health and fitness is an obvious choice, so anything athleisure related feels very relevant.”
"We associate tennis with wellness, leisure, and an aspirational lifestyle,” Anabel continues. “Since our lifestyle options suddenly became very limited during lockdown we have become inclined to seek out extreme sartorial representations of those lifestyle pillars in fashion form.”
While tennis’ athleticism and outdoorsy optimism may lend itself to lockdown living, it's clean and crisp aesthetic and timeless sensibility has also played a role in its social media popularity. It inspired sustainable swimwear brand Ode & Rae to lean heavily into a ‘90s tennis theme for their recent campaign. “As a brand we like to tell a story around each campaign," Lucia Thomas-Howard, the brand’s creative director, tells me. "Often these are ideas that push boundaries and challenge where you would normally see swimwear," she continues. "We were heavily influenced by vintage country clubs and tennis-themed, high-fashion campaigns through the decades. Tennis, in my opinion, is the most chic of all ball-sports. The all-white outfits and feminine pleated skirts instantly touch on both minimalist and sports-luxe fashion trends, which have both been so popular over recent seasons.”
Advertisement

This is hardly fashion’s first foray courtside though. Over the last few seasons alone, brands from Ralph Lauren and Philipp Plein to Prada and Thom Browne have riffed off the prep and primness of tennis uniforms as well as the sport’s association with privilege and wealth, making it a natural fit for the luxury world.
More recently though, it has been tennis’s retro appeal proving popular for designers. Lacoste, which was founded in 1933 by tennis player René Lacoste, has leaned heavily into its own heritage ever since creative director Louise Trotter took the helm. For the brand’s SS20 collection, she showed her first catwalk show — featuring colour block knitted polos, drop waist tennis skirts and tennis-inspired cable knits — in the grounds of Roland-Garros, home of the French Open. Likewise, for Pre-Fall 2019, Gucci dug into brand archives, this time turning to the ‘80s to reimagine the brand’s vintage Tennis Club logo for Alessandro Michele’s eclectic grandma-chic look.
Fashion’s love for the sport is well reciprocated by the tennis world. Its uniform, perhaps unlike any other modern sport, has evolved to reflect changing attitudes to women’s bodies and sport. What began as full-skirted, high-necked and long-sleeved tennis gowns of the Victorian era (a time when modesty trumped practicality) was swiftly transformed by the Flapper designs of the 1920s, as shorter skirts and sleeve lengths became popular. Women soon began to wear shorts (French player Suzanne Lenglen even donned Flapper style headbands on the court). The ‘50s took inspiration from Dior’s New Look silhouette with moire feminine styles (ruffles, nipped-in waists and lace edging), while the ‘60s ushered in more masculine, Mod-inspired, formfitting, a-line silhouettes. By the ‘70s, women’s tennis was becoming established, empowered by the Women’s Liberation movement and the formation of the Women’s Tennis Association in 1973 by Billie Jean King. This is the same year she played the infamous ‘Battle of the Sexes’ match against Bobby Riggs (in a stylised mini tennis dress with an exaggerated ‘70s style collar nonetheless).
Advertisement

Ever since the ‘80s and ‘90s, when women’s tennis became professionalised, women’s tennis attire has been driven by the stars of the court and their brand partnerships, resulting in an exciting player-focussed, personality-first lineup of looks and a close knit relationship between tennis and streetwear. Thanks to contemporary players like the Williams sisters, Maria Sharapova and Anna Kournikova, the tennis skirt has become a fashion item in its own right; its status as an It girl favourite further cemented by our favourite Queen Bees, Clueless’ Cher Horowitz, Mean Girls’ Regina George and Gossip Girl’s Blair Waldorf. In 2021, when Y2K rules supreme on TikTok and Depop, it’s still a teen style favourite. Euphoria’s Jules did it best, styling her plaid and pastel pleated skirts with mesh tops, baby T-shirts and chunky Buffalo London trainers.
For those eager to add a tennis skirt to their own wardrobes, Depop, ASOS Marketplace and eBay are heaving with secondhand options. Alternatively, try sportswear retailers like JD Sports and Sports Direct or Urban Outfitters for high street alternatives. As our favourite fashion girls prove today on social media, there are no rules when it comes to styling your tennis skirt. You could lean all in to the ‘90s country club look in sporty tank tops, chunky trainers, tube socks and graphic sweatshirts like Camille Charriere and Chloé Pierre. Or you could flip the sporty narrative with tights and cowboy boots (like model Imani Randolph), midriff-baring Y2K crop tops (like influencer Isabelle Yee), a button down and knit vest (like photographer Isabella Newman), stiletto boots (like stylist Vanielle Verlos) or with retro prints and creepers (like model Destiny Joseph). The ball is in your court. 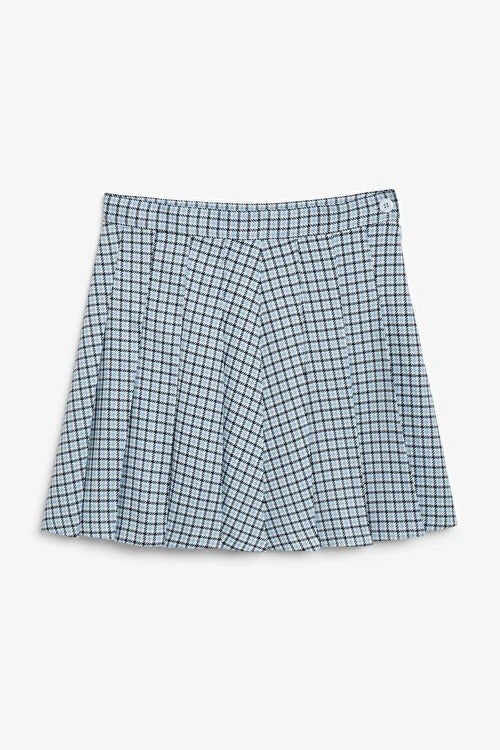 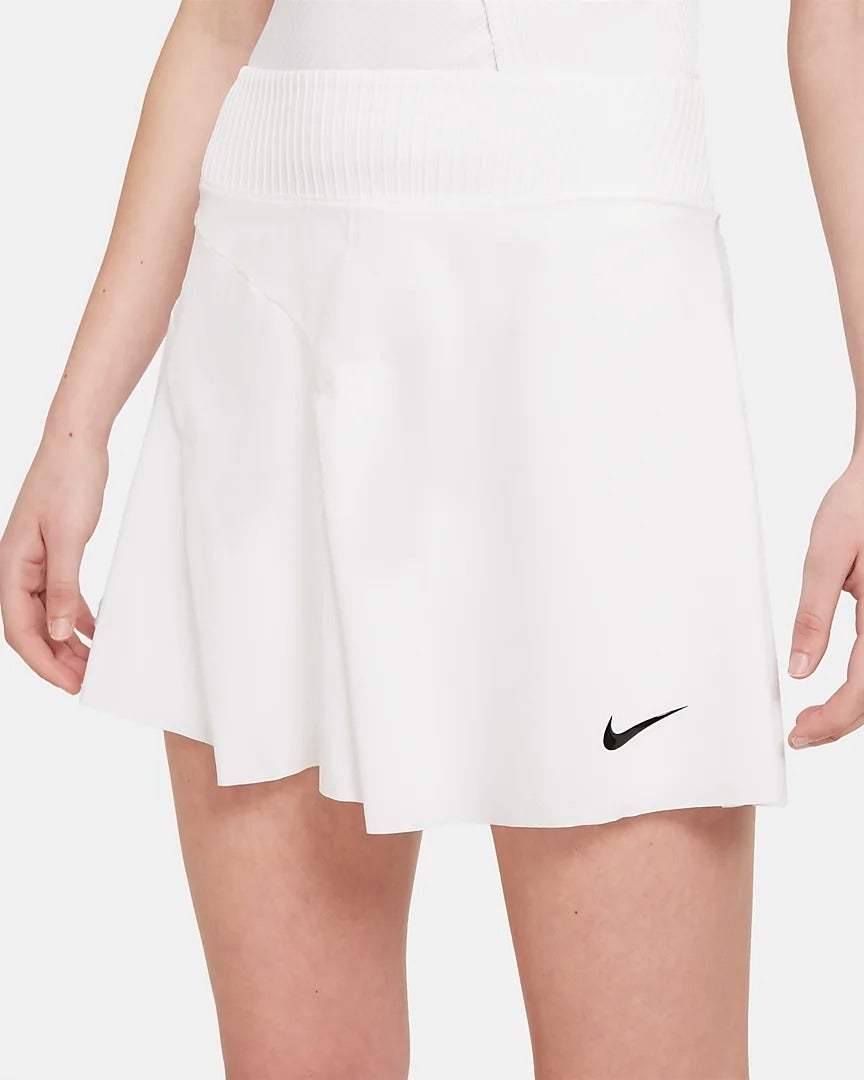 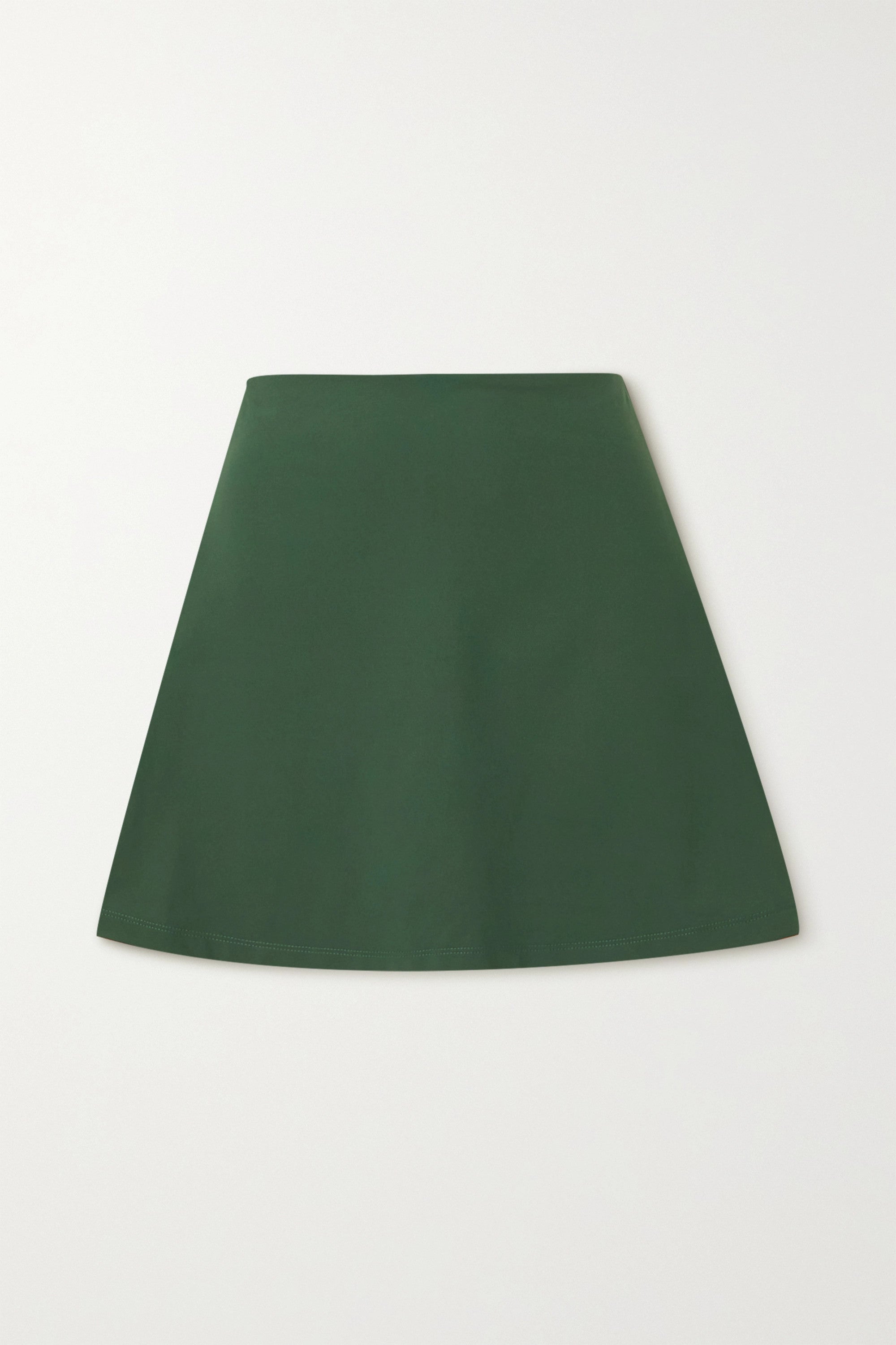 Girlfriend Collective
Compressive Recycled Stretch Skirt
£55.00
Net-A-Porter
Fashion
Denim Leg Warmers Are The TikTok-Approved Way To Upcycle Your Jeans
Fashion has had a string of odd trends this year, from unnecessary belts to glass handbags and cargo jeans. But if there’s a trend that takes the “Most
by Frances Solá-Sant...
Style
Crop Tops & Biker Chic: The Best Street Style At Copenhagen Fashi...
by Pema Bakshi
Style
Horse Girl Has Grown Up & Entered A New Era
I’m sure I’m not alone in admitting that for my preteen self, horses were a big part of my life. Looking back, it was a surprising obsession fo
by Maggie Zhou
Advertisement
Fashion
A Basket Bag Is The Only Accessory You Need This Summer – Here Ar...
by Esther Newman
Shopping
14 Of The Best Brands Bringing Back Silver Jewellery
by Esther Newman
Fashion
The Best Denim Shorts For Every Summer Style
by Alicia Lansom
Fashion
We’re All Barbie Girls In A Barbiecore World
One month ago, the internet was momentarily silenced when the first photos emerged from the set of Greta Gerwig’s highly anticipated Barbie film. The glo
by Alicia Lansom
Shopping
We Just Found THE Dress Of The Summer (And It Has Pockets)
Refinery29’s dedicated Shopping team is back with another in-depth examination of an internet-revered item: Anthropologie’s Somerset Maxi Dr
by Vivien Lee
Fashion
Move Over, Coastal Grandma. Cool Coastal Aunt Has Arrived
Over the past few months it’s been impossible to miss the steady influx of Diane Keaton regrams, Nancy Meyers references and linen-on-linen ‘fits.
by Zoe Anastasiou
Shopping
7 Sustainable Loungewear Brands For Guilt-Free, Summer Comfort
by Georgia Murray
Fashion
You Can Still Wear Knits In This Heat – Here’s How
by Ebony-Renee Baker
Fashion
Let’s Talk About Our Love-Hate Relationship With Linen
Dear linen, just like clockwork you’ve come back into my life. Every year, as the weather gets warmer, you’re suddenly all over my socials, you’re in
by Ebony-Renee Baker
Advertisement
Advertisement