Skip navigation!
Story from Beauty
Photo by Sarah Harry Isaacs.
There are countless myths associated with rosacea: it's just blushing; it's caused by drinking; makeup makes it worse. One of the most common misconceptions is that only white people experience the skin condition.
Although more prevalent in people with fairer skin tones, those with darker skin are prone to rosacea, too. While experts say that it is actually more common than you might think, rosacea in darker skin is often misdiagnosed, which leads to lots of confusion and frustration when it comes to skincare and treatment.
Ahead, three skin experts break down what you need to know about rosacea in dark skin and how best to treat it.
Advertisement
What is rosacea?
Rosacea is an inflammatory skin condition. While it can present in a number of ways, says London-based consultant dermatologist Dr Justine Kluk, it often begins with a tendency to flush or blush more easily. "With time, that warm sensation can become more constant and people may develop permanent redness of the nose and cheeks along with a selection of other symptoms, such as spots, dilated blood vessels, skin dryness and scaling, burning and stinging, and sensitivity to multiple skincare products."
Rosacea can also affect the eyes, says Dr Thiviyani Maruthappu, consultant dermatologist and British Skin Foundation spokesperson. "Patients may have swollen eyelids, crusting, burning or stinging in the eyes," while Dr Kluk pinpoints swelling of the nose or cheeks as a rarer symptom.
What triggers rosacea?
While skin experts are not quite sure exactly what causes rosacea, there is a handful of common triggers. "They include sunlight, stress, heat, alcohol (especially red wine), spicy foods, hot drinks, wind and cold, physical exertion and some skin and haircare products," says Dr Kluk.
What does rosacea look like in darker skin and why is it often misdiagnosed?
Research has found that diagnosing rosacea is often delayed or missed in those with darker skin. "Rosacea can be more tricky because the earliest symptom is often facial redness and flushing, which can be masked by background pigmentation," says Dr Maruthappu. "A more readily recognisable symptom is stinging or burning and sensitivity to topical products. Rather than redness, darker or dusky brown patches may appear on the face instead in combination with acne-like breakouts." Dr Kluk adds dryness or swelling and thickening of the skin on the nose, cheeks, chin and forehead to the list of symptoms in dark skin.
Advertisement
Rosacea in dark skin is actually more common than people think, says Dr Ewoma Ukeleghe, skin expert and founder of SKNDOCTOR. "Research suggests that rosacea may affect up to 10% of the ethnic population globally. Based on what I see in clinic, symptoms (most commonly papules, which are raised areas of skin) are typically concentrated to the cheeks." Dr Ukeleghe adds: "Rosacea is also associated with post-inflammatory hyperpigmentation, oiliness and mild redness, the latter usually on fair skin of colour. Such clients also report more sensorial symptoms, such as burning, stinging or heightened sensitivity to the affected areas."
Dr Ukeleghe says it is also worth noting that a lack of education and possibly ignorance is a real issue among clinicians. "Standard medical training doesn't address how common skin conditions appear on skin of colour," she says, which often results in underestimating rosacea in darker skin tones.
What should you do if you suspect you have rosacea?
If you suspect you might have rosacea but are yet to be diagnosed, Dr Kluk suggests reporting it to your GP or a dermatologist so that they can carry out a thorough consultation. Make a list of your symptoms and come prepared with pictures, as rosacea can fluctuate. The Black Skin Directory is a particularly helpful platform for locating skin experts and clinics armed with the specific tools and resources needed to diagnose and treat skin of colour.
Advertisement
How can you treat rosacea in darker skin?
According to Dr Ukeleghe, the approach for treatment is pretty much the same, regardless of skin type. She adds that in darker skin tones, treatment may also help manage post-inflammatory hyperpigmentation but that the key to nailing a skincare routine is simplicity.
"You're going to need to improve your skin barrier function," says Dr Ukeleghe. "This includes avoiding alcohol-based products and harsh exfoliants." Dr Maruthappu seconds this. "I would advocate being cautious with exfoliation. I have recently seen more rosacea flare-ups in darker skinned patients due to overexfoliating, for example aggressive scrubbing and combining this with chemical exfoliants (such as glycolic acid) which can irritate rosacea-prone skin."
The right cleanser is important, too. "Make it gentle and fragrance- and soap-free. Use it twice a day," says Dr Maruthappu. Your chosen cleanser should also contain emollients (which sit on the surface of the skin and prevent moisture from escaping), such as glycerin. "Use lukewarm water and massage gently, then rinse and pat dry with a clean, soft cotton towel." 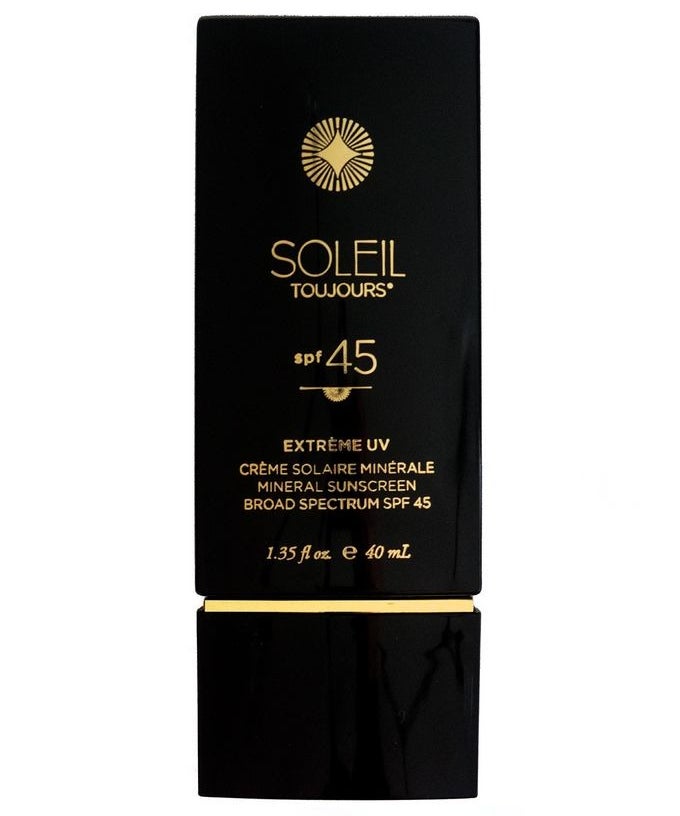 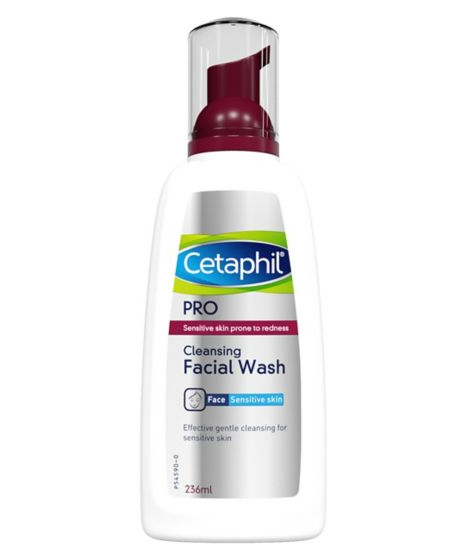 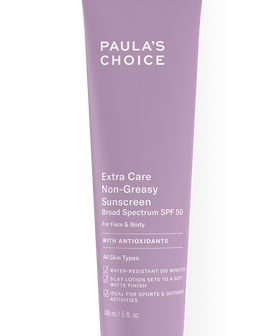 Paula's Choice
Sunscreen Spf 50
£21.00
Paula's Choice
Dr Ukeleghe says that silicone-based moisturisers are found to be beneficial, while Dr Maruthappu rates ingredients such as niacinamide and antioxidants. Both experts hit home the importance of using SPF during the day to protect skin from UVA and UVB rays. "Physical sunscreens are best as they tend to be less irritating than chemical sunscreens," says Dr Ukeleghe. "Frustratingly though, physical sunscreens tend to be ashy in appearance, so picking specific skincare products will be a matter of trial and error, especially due to the sensitivity typically seen in rosacea."
Advertisement 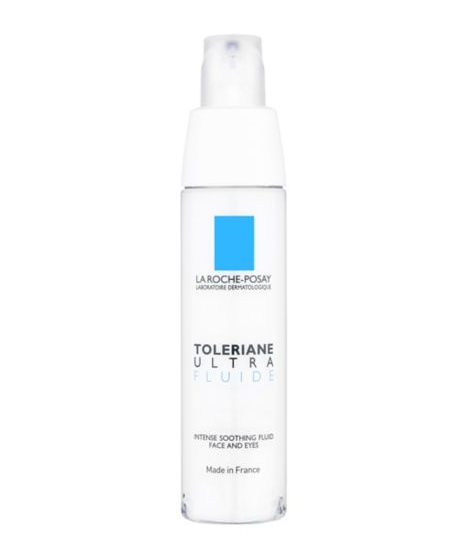 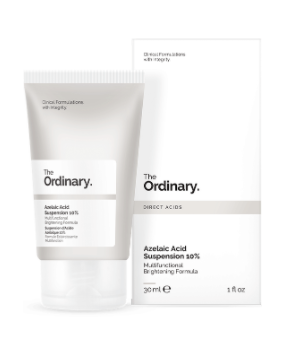 The Ordinary
Azelaic Acid Suspension 10%
£5.50
The Ordinary
Paula's Choice Sunscreen SPF 50 for Face & Body, £21, and Extrème UV Face Mineral Sunscreen SPF 45, £45, are both great mineral sunscreen options for darker skin.
Dr Kluk recommends the Cetaphil PRO range. "Massage your cleanser gently into your skin morning and night and rinse off with lukewarm water. Then, find a 'broad-spectrum' facial sunscreen with no less than SPF30 and apply it every morning, 365 days a year. Apply a moisturiser before bed to help soothe the skin, relieve dryness and strengthen your skin barrier," she says.
Dr Kluk also suggests paying extra attention to product labels and being cautious of products that contain menthol, camphor or sodium lauryl sulphate, or those that are heavily fragranced. "These can trigger rosacea flare-ups," she says. "Also avoid other known skin irritants like acids or retinoids unless under the supervision of a specialist. Wherever possible, get testers or samples to try at home before committing to bulk purchases of any new skincare product and do a patch test on a small area before applying to your whole face if you have very reactive skin. Be kind to your skin and don’t rub, scrub or vigorously massage your face. Finally, there are some excellent products that neutralise the redness of rosacea and can really boost skin confidence." Here's what the experts recommend.
Dr Ukeleghe mentions that if you can speak to a skin specialist (lots are offering digital consultations right now), prescription skincare or laser therapy (once clinics reopen) are other effective avenues to explore. That said, rosacea is very individual, according to Dr Maruthappu. "Skin tone must be carefully considered when planning laser or light treatments as these may or may not be suitable depending on the richness of skin pigmentation."
Arm yourself with knowledge before speaking to a skin specialist. The British Skin Foundation website is a great resource for finding out more about rosacea, as is the British Association of Dermatologists and the Black Skin Directory.
Celebrity Beauty
Jennifer Hudson’s Go-To Sunscreen Will Make You Want To Use...
A few moments into my Zoom call with Jennifer Hudson, I felt like she was the missing member of my girlfriends group chat. Hudson was radiant in a white go
by aimee simeon
Skin Care
You’re Invited To Get Up Close & Personal With My Post-Chem...
by aimee simeon
Skin Care
TikTok Says Drinking Chlorophyll Water Will Clear My Acne — Shoul...
For better skin.
by Megan Decker
Advertisement
Skin Care
An Expert Guide To Banishing Tired-Looking Skin For Good
Dear Daniela, I feel like I always look tired, even when I get enough sleep! It’s so annoying to always have people asking if I’ve been up all night, w
by Daniela Morosini
Beauty
Welcome Back To The Black Parade: How ’00s Emo Has Invaded ...
Indie, scene, skater… The ’00s brought us numerous alternative subcultures, but there’s one in particular which hits many of us with an i
by Jacqueline Kilikita
Beauty
The Pressure To Look Good After Lockdown Is Unbearable
When Boris Johnson announced the roadmap for exiting lockdown, hope crept in. Even with slight delays to the vaccination programme, that hope has stuck aro
by Megan Carnegie
Skin Care
This At-Home Face Massage Lifts & Sculpts In 3 Easy Steps
During times of emotional duress, many people treat themselves to a spa service, like a hot-stone massage or a 50-minute facial. But in the current climate
by Megan Decker
Skin Care
The Big Mistake You’re Making In Your Skincare Routine
In difficult times like these, you might look to a handful of proven stress relievers: mindfulness meditation, yoga, breathing exercises, a massage. But th
by Jacqueline Kilikita
Makeup
7 Tinted Moisturisers Our Editors Love For Video Calls & Beyond
by Tara Rasmus
Skin Deep
How To Deal With Eczema When You've Never Experienced It Before
Just like acne, atopic eczema is a skin condition many of us encounter in adulthood. Characterised by itchy, dry, cracked, sore and red skin, it’s ex
by Jacqueline Kilikita
Beauty
Everything You Need To Know About Machine Gun Kelly’s New N...
Machine Gun Kelly is a true multi-hyphenate. He already has an acting career, number one album and multiple music awards under his belt and now he’s
by Jacqueline Kilikita
Celebrity Beauty
Viola Davis’s Self-Care Routine Is Her Ultimate Source Of P...
Around this time last year, Viola Davis was scheduled to begin shooting a movie in Toronto when public-health officials enforced stay-at-home orders to slo
by aimee simeon
Advertisement
Advertisement