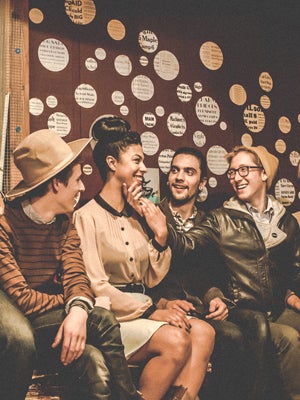 Monica Martin knows a thing or two about hanging with the boys: She’s the only female member of the seven-piece, up-and-coming, indie-rock group, Phox. And, just in case she didn’t log enough time with them on stage, they also happen to be her roomies. But that’s just fine by her — after all, it was her bandmates (Matt Roberts, Zach Johnston, Dave Roberts, Matt Holmen, Cheston Van Huss, and Jason Krunnfusz) who believed in her and her voice enough to give the shy 24-year-old front woman the confidence to sing — and in front of a live audience, no less.
Advertisement
The Wisconsin-based group played at Lincoln Hall over the weekend for a special performance with Junip. But if you couldn’t snatch tix to the sold-out show, don’t fret: We caught up with Martin to get her take on style, life on the road, and, of course, the guys.

You have a very unique voice. When did you discover you could sing?

"I guess I always really liked singing — I did it in private a lot. But, I would say it’s just in the last three months that I’ve grown comfortable with feeling free to express myself publicly. I’m still nervous, but now I’m using those nerves. Without the support of these guys, I wouldn’t be singing."

How would you describe Phox’s sound to someone who’s never heard it?

"Folk pop, indie pop. We’ve got our hands in a lot of other pots. There’s some electronic elements; there’s some rock."

Who are some of your musical inspirations?

"I love so many different genres of music. I love classic jazz — Billie Holiday, Ella Fitzgerald, Etta James. I really love Brandi Carlile, Fiona Apple — I love a lot of lady singers. And Mountain Man, to me, is absolutely breathtaking."

You just released a new EP, Confetti. How do you think your sound has evolved since your last record, Friendship?

Okay, so what’s it really like hanging with six dudes 24/7?

"Oh, man! I’m really into feminine things — I love doing my makeup, I love doing my hair, I love party dresses — I hate wearing pants! But I can also be like a 14-year-old boy. I will play Call of Duty, and I played ice hockey and competitive sports. Because there’s not romance in the group, it’s kind of like having six boyfriends. Although I recently cut six inches off my hair, and I walked in the house so excited, and they were just like, 'Hey. What’s up?' I was like, 'You guys! I just cut six inches off my hair!' I do need a little more time to get ready than they do. I kinda get crap for that."

"I like wearing high-waisted skirts — I think they are flattering to my body shape. I always like a tall shoe and big hair. I think it was Aretha Franklin who said, 'I’m a big woman. I need big hair!' I’m pretty tall, so I gotta rock this out! I do a cat-eye most of the time. I’ve been doing a wing-tip liner since eighth grade. Once I find something that works for me, I stick to it."

Do you help the guys get ready for gigs as well?

"I think the boys all have fairly good taste, but I do cut all of their hair. They all have really good hair. If someone tried to wear cargo shorts on stage, I would lose it."

Any quick fix beauty tips you’ve employed on the road?

"The thing that’s helped me out the most is finding a style for my hair that will last the longest. I’m bi-racial, so my hair is really curly. I do a roller set, reroll it at night, and pin it with some double prong clips. Wake up, shake it out, it looks good as new!"