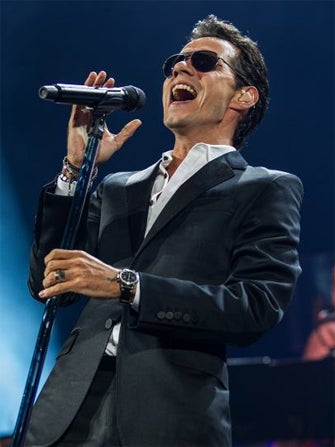 Photo: Courtesy of Christopher Costoso.
It doesn’t matter that he has five Grammys, 12 million albums sold worldwide, and a world tour that consistently sells out arenas. Marc Anthony isn’t done yet. To add to his already exhaustive résumé, he’s added another title: philanthropist. His Maestro Cares Organization, a non-profit helping underprivileged youth in Latin America, is now in its second year, and he’s doing all it takes to ensure that it’s around for as long as it needs to be.
We caught up with Anthony after his high-energy performance at the United Center to dish about who he dreams of working with next and the low-key routine he does before preparing to take the stage. Sadly, though, there's no word on whether the mega-star is picking up fashion advice from his new girlfriend Chloe Green, heiress to the Topshop empire, who was in tow with Anthony during his time in Chicago.
Advertisement

Where do you draw your inspiration?

"There is always something to do. I’m fortunate enough to love my job. I could not imagine having to wake up and do something I don’t like. What motivates me is, first and foremost, knowing how lucky I am to be where I am. I can’t complain. Who am I to mope, moan, bitch, or complain when I’m doing what I love? I am always looking for the next thing, to write the next song that I fall in love with, record the next album that’s going to be mine for the next 20 years. I am also looking forward to flying back to La Romana [Dominican Republic] to see the kids from the orphanage who inspired me to create Maestro Cares. I just love surrounding myself with things I love to do."

Explain Maestro Cares’ origins and why should people care?

"Because you can actually make a difference. About two years ago, I went to see this orphanage and I fell in love with the kids. I went back home and couldn’t believe how they were living. It broke my heart, and I was shocked that no one was taking any action to fix their living conditions. So, I just said to myself: I’m going to do something about it. I don’t care; I don’t need anyone. I’ll pay for everything myself if I have to. I was so full of passion about that [that] I spoke to Henry [Cardenas, traveling companion and friend] that same night and said let’s do something about this together."

Advertisement
"About a week later, we went to speak to the Lima family, founders of Casa de Campo, and they gave us five acres of land. From there, we activated the community, and people all of sudden started doing their part. A few months later, around Thanksgiving, we went back to see the kids and break ground less than a year from when we decided to pursue this venture. In less than a year, we had a five-acre campus with a basketball court, baseball field donated by Goya, a huge cafeteria, a workshop where they can learn a trade, 100 beds, a park an infirmary — everything. It doesn’t stop there."

How will Maestro Cares grow?

"Maestro Cares’ mission is to activate people. My dream is to take these five acres of land, scale it down, and make it available to different countries, so that maybe one day, Mexico has a piece or Colombia. The possibilities are endless. What really attracted me to this is that it’s brick and mortar — something you can touch and feel. It’s extremely gratifying to know the orphanage is going to be around for the next 10, 20 years. It’s not just the first 40 kids I fell in love with, but several generations will get to experience it as well."

What's next-up for the king of salsa?

"To survive this tour [laughs]. It was supposed to be over in December 2013, and now they’re extending it to March 2014. There’s even talk of it going to May 2014, and I’m like stop, stop. It’s a whole lot of traveling and I can’t wait to get back and open another orphanage. I can’t wait for the kids to run through the gates and for them to know it's theirs."

"Right now, it's Bruno Mars. I was talking to him the other day [drifts off, smiling]; he is a great writer, true musician with a great range, and a genuinely good guy. Love him to death and I’m a great fan, so we’ve been talking about it."

Do you have a preperformance ritual?

"I just have a beer and cigarette. That’s it."