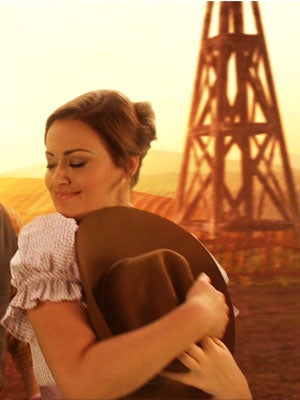 We’ve been geeking out over musical theater for as long as we can remember. The lyrical songs, the beautiful costumes, and the dreamy plotlines have had us hooked on Rodgers and Hammerstein since we were knee-high. So, naturally, we couldn’t be more psyched about the Lyric Opera’s spectacular production of Oklahoma!, set to play at the Civic Opera House from May 4 to 19.
In anticipation of the major theater event, we chatted with Ashley Brown, who will play the role of Laurey. With a set of pipes like you wouldn’t believe, Brown originated the role of Mary Poppins on Broadway and played Magnolia in the Lyric’s 2012 production of Show Boat. Turns out, she’s also crazy about NARS cosmetics, loves getting dressed up in wedding gowns, and knows just where to grab a bite in Chicago. Brown is our type of gal, onstage and off.
Advertisement

Oklahoma! is an old favorite for many musical-theater lovers — were you also an early fan?

“Absolutely! I played the role of Laurey in high school. So, revisiting it has been a blast, now that I have a little more experience under my belt. These songs bring back the early days when I first started taking voice lessons.”

Tell us about your character, Laurey. What do you love best about playing her?

“I love how passionate she is. She's direct yet vulnerable. She's a lovely, complicated person to play. She's a lady but she can hang in there with the boys.”

What’s the most challenging aspect of this role?

“I guess the most challenging part is remembering her shyness. Women were so shy at that time. [I have to] remember that someone touching your hand was a huge deal. It wasn’t something that happened all of the time.”

What are your personal favorite songs from Oklahoma!?

“It’s hard to choose, as all of the songs are so well-written and fun to sing and explore. If I had to choose, it would be ‘Out Of My Dreams.’ I'm in love with everything about that scene and song.”

Switching gears a bit, we’d like to chat about fashion and beauty (two of our favorite topics at Refinery29!). Since you wear a lot of makeup for work, you must have your cleansing process down pat. What are some of your skin-care tips?

“Wash your face at night, exfoliate, and wear sunscreen! I have my normal moisturizer, then I have a second moisturizer that has sunscreen in it. I'm obsessed with keeping my skin hydrated. That is key!”

When you’re doing your own, everyday makeup, which brands and products do you love?

As for fashion, are there any Chicago shops you love to swing by when you’re in town?

“Oh I don't even know where to begin with the shopping in this city! I love it all!”

What do you think of your onstage wardrobe for Oklahoma!?

“My costumes are beautiful! Especially my wedding dress. It makes me laugh because I get married about three times a year. Every musical I do, there seems to be a wedding! I love it.”

We’d love to hear about “your” Chicago. Have you fallen in love with any local restaurants?

“There are so many amazing restaurants in this city. I love the Tortoise Club. It's a gorgeous new restaurant. Everyone should try it!”

Have you had the chance to check out any other Chicago theater?

“Not this time. But I'm really looking forward to seeing Big Fish.”

And, if you had a whole day off, what would be your ideal Chicago day?

“I love to be outside! I love taking my dog, Eddie, to Navy Pier and to the beach. I'm lucky enough that I spend more than half of my life in dark theaters, so getting outdoors is like a vacation.”

Oklahoma! will play at Lyric Opera of Chicago May 4 to 19. Tickets, $32 to $153, available online or by calling 312-332-2244.
Lyric Opera of Chicago, Civic Opera House, 20 North Wacker Drive (at West Madison Street); 312-332-2244.
Photo: Courtesy of Lyric Opera of Chicago
Living
This Couple Got Married While Running A Marathon — No, REALLY
What an amazing day!!! #marathonwedding @ChiMarathon pic.twitter.com/rHQ7HxkOfT — Stephanie Reinhart (@kitchy7) October 12, 2015 Like many couples, S
by Ally Hickson
Chicago
J-Lawr & Amy Schumer Boogie Atop A Piano During Billy Joel’...
First Taylor Swift, now Billy Joel. Apparently 2015 is the year that really famous pop stars bring other really famous celebrities onstage with them to per
by Elizabeth Kiefer
Chicago
The Lazy Girl’s Guide To Amazing Skin: Summer Edition
by Melanie Rud Chadwick
Advertisement
Chicago
7 Cool Shops To Visit In Chicago This Weekend
by Christina Perez
Chicago
Found! The Perfect Last-Minute Summer Getaway
by Rebecca Taras
Chicago
7 Chicago Food Experts Reveal Their Fave Summer Eats (& More!)
There’s so much to love about Chicago summers, and tops among them is the food: The bounty of fresh fruits and veggies at farmers’ markets, the
by Judy Sutton Taylor
Chicago
20+ Pics Of Pitchfork’s Most Inspiring Street Style Stars
by Erin Donnelly
Chicago
How To Do Chicago Like A Lollapalooza All-Star
by Leah Pickett
Chicago
11 Chicago Dream Apartments To Rent Right Now
by Stephanie Sims
Chicago
18 Delicious Chicago Dishes For Your Foodie Bucket List
by Caroline Stanley
Chicago
Chicago’s Best Al Fresco Happy-Hour Spots
by Amelia Levin
Chicago
How Two Sisters Are Changing The Way We Namaste
We tend to think the best decisions in life are made over pizza. Case in point: One frigid January night last year at Pequod’s, sisters Natalie and A
by Jourdan Fairchild
Advertisement
Advertisement
Discover
R29 Stories & News
Watch
R29 Original Series & Films
Shop
R29's Most Wanted