Skip navigation!
Story from Stores
In the latest controversy for mass retailer Forever 21, an (understandably) disgruntled employee has leaked an official letter announcing cuts to benefits and hours for some of the company's employees. Jezebel points out that this may be a response to the Affordable Care Act, which has put many companies into a similar situation, though the company has stated that is not the reason for these changes. Right now, the Forever 21 Facebook page is full of comments complaining about the letter, from employees and customers alike. Though so far, the company has only provided a generic response saying the cuts will affect less than 1% of all American Forever 21 employees and is the result of an effort that "realigned its staffing needs to better reflect sales expectations." The company has previously come under fire by the U.S. Department of Labor for issues with overtime-wage laws.
See the full letter below: 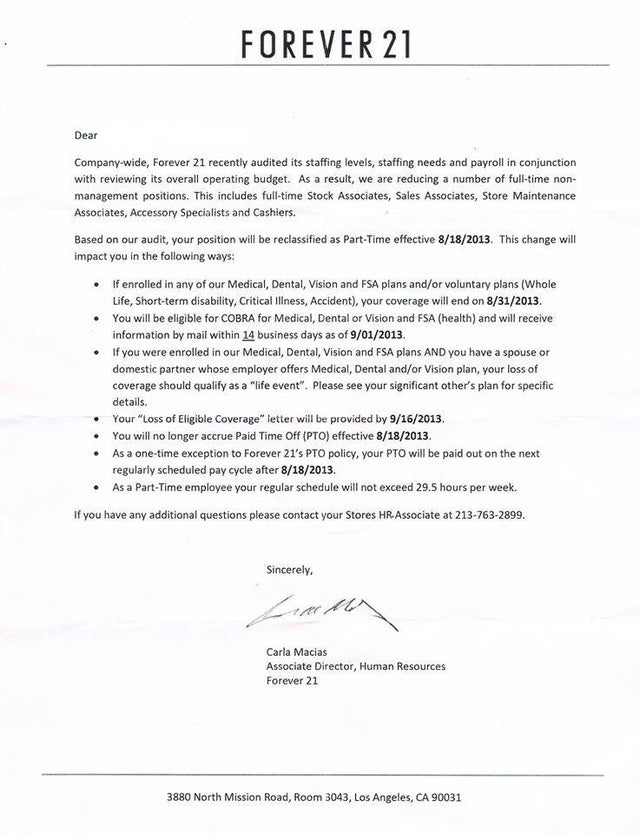 Image: Via Jezebel.
Somos Latinx
Latinx Brands Are Growing Fast — But They’re Still Hard to Find o...
In March, Rebecca Alvarez Story made history by becoming the first Latina founder to launch in the sexual wellness aisle at Target, both IRL and online. He
by Mercedes Viera
Fashion
Kress Ignited My Love for Fashion — Now It’s Another Casual...
One of my favorite childhood memories happened while I was wearing an outfit my mom bought for me at Kress: It was a red top-and-skirt combo with a ruffled
by Frances Solá-Sant...
Indie Designers
Meet The Founders Behind The Latina Power Shirts You’ve Bee...
Lifestyle brand JZD is an independently owned Latina e-retail brand with more than 40K followers on Instagram that include celebrities like Eva Longoria, A
by Angela Bonilla
Advertisement
Online Shopping
Mother’s Day Stragglers: These Sites Have Super-Fast Shipping
Your mom always taught you that it was important to be prepared and plan ahead. If you’re not five minutes early, then you’re five minutes late — rig
by Emily Ruane
Style
Target’s Latest Collab Features Christopher John Rogers & RIXO — ...
Just under a year after debuting Target’s Designer Dress Collection, a 70-piece collaborative line of sundresses by Cushnie, Lisa Marie Fernandez, and Lo
by Eliza Huber
Style
ASOS’ New Earrings Are Worn By A Model With A Cochlear Implant
This week, British fashion retailer ASOS quietly introduced a new model to its roster, Natasha Ghouri, whose cochlear implant — a surgically implanted he
by Eliza Huber
Style
This Barbie Ferreira Look Will Get You Excited For The H&M x Simo...
Update: The H&M x Simone Rocha collection is now live on HM.com. This story was originally published on March 10, 2021. In less than 24 hours, H&M?
by Eliza Huber
Style
Despite Featuring Plus-Size Models, Victoria’s Secret’s New Swimw...
On Tuesday, WWD reported that Victoria’s Secret would be bringing swimwear back into select store locations after discontinuing the line in 2016, a time
by Eliza Huber
Style
ASOS Bought Topshop. What This Means For The Fashion Brand.
On Monday, fashion retailer ASOS confirmed rumors that it would, in fact, be purchasing Arcadia Group’s brand lineup, including millennial fashion favori
by Eliza Huber
Style
Could Mall Brands Be Reddit’s Next Stock Market Target?
Starting on Friday, redditors on the subreddit r/WallStreetBets began to target Wall Street short sellers — market makers and hedge funds that bet on the
by Eliza Huber
Deals
Nordstrom’s BIG Sale Is The Post-Holiday Deals Distraction We Love
We won’t launch into this sale post talking about how 2020 totally sucked (it did, and we just did — whoops). But, we will take a moment to acknowledge
by Marissa Rosenblum
Deals
Here’s What To Buy From Reformation’s FINAL 2020 Sale
by Emily Ruane
Advertisement
Advertisement
Discover
R29 Stories & News
Watch
R29 Original Series & Films
Shop
R29's Most Wanted