Skip navigation!
Story from Wellness
To us (and most likely to you, as well), it makes sense that you can't own part of a person. But until yesterday, Myriad Genetics, a Utah-based lab, owned the human gene that is known to dramatically increase the risk of breast cancer. That's right — they owned part of our genetic makeup. The lab had patented the BRCA1 and BRCA2 genes after spending untold amounts of money to find and isolate them, meaning that other scientists and laboratories were denied access to diagnostic testing on the genes. But not anymore: The Supreme Court ruled unanimously on Thursday that genes can't be patented, a decision that could be a watershed moment in the battle against breast cancer. According to ABC News, the cost of getting tested for the potentially dangerous genes will most likely be reduced, thanks to a more competitive market. Bonus? Better treatment options could be right around the corner, and more opportunities for testing means more chances for a cure. (ABC News) 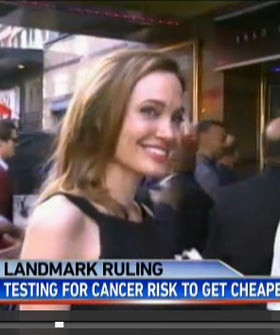