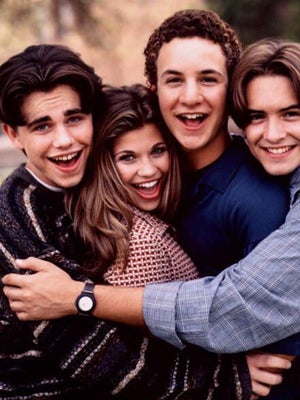 Major news: A sequel series to everyone's reason for living, Boy Meets World, is really happening, and it's going to be called — drum roll — Girl Meets World.
In case you're not familiar, BMW was totally The Wonder Years of the '90s — the show that tweens everywhere tuned in to watch every Friday night (TGIF, anyone?) to aww over the lovebirds, laugh over Cory and Shawn's antics at school with Mr. Feeny, and giggle over the adorably dumb Will Friedle as Cory's brother Eric (which explains that hot-but-dense jock we dated that one time). For seven years, we delighted in every moment of this witty yet touching show, and admit to getting a little misty during the series finale in 2000 — it was the end of an era, in more ways than one.
Advertisement
This new reboot will focus on Cory and Topanga Mathews' — get this — thirteen-year-old daughter. Yep, it's been that long since the show ended, and now we're officially feeling old. Danielle Fishel and Ben Savage will be reprising their roles (Fishel wrote in an open blog post about the show, saying that the Boy Meets World years were "among the most warm, hilarious, insightful, educational years of my life and I wouldn’t trade them for the world"), and we can only hope that Rider Strong re-appears as "Uncle Shawn," with (fingers crossed!) more shaggy bangs and lip pouts to keep us entertained. Despite the fact that most show spin-offs tend to crash and burn in the worst ways possible (Joey, anyone?), we're pretty confident this won't just be a half-assed remake, but a whole new chapter in the Matthews' lives: "GMW [as it will now be known] is a new show...it will also have new faces, new themes, and new messages."

So, guys, tell us: Are you as excited as we are for the Girl Meets World pilot? Who do you think should play 13-year-old Riley? And gosh darn it, was Shawn Hunter not the dreamiest dude ever back in the day?!
(TVLine)