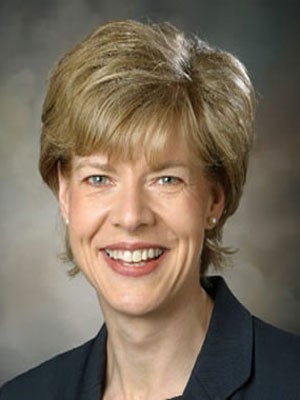 They’ll be welcomed into (or back to) the Senate by Kelly Ayotte (R-N.H.), Barbara Boxer (D-Calif.), Susan Collins (R-Maine), Kay Hagan (D-N.C.), Mary Landrieu (D-La.), Barbara Mikulski (D-Md.), Lisa Murkowski (R-Alaska), Patty Murray (D-Wash.), and Jeanne Shaheen (D-N.H.).
Advertisement
Obviously, we’re pretty excited for January. And we can’t help think that we’re one step closer to the scenario Gillibrand outlined on The Daily Show earlier this year: "If we had 51 percent of women in Congress, do you think we’d be debating birth control? We’d be debating everything else that really matters."
The previous record for women in the Senate was 17 — the number that are serving right now. Two of the current women, Republicans Olympia Snowe and Kay Bailey Hutchison, are retiring.
We’ve certainly come a long way from the days when Mikulski — the longest-serving woman in Congress — was barred from using the Senate gym and had to ask permission to wear pants on the Senate floor (it was 1987!).
What makes the new record more awesome is that Warren, Baldwin, and Hirono are the first women to represent their states in the Senate. Hirono is also the first Asian-American woman (she was born in Japan) to be elected to the Senate.
Gay rights also got a boost: Maine and Maryland both voted to allow gay marriage in their states, and Baldwin became the first openly gay person elected to the Senate (Kyrsten Sinema of Arizona will become the first openly bisexual person elected to Congress if she wins her House race, and it looks likely, but the results aren’t final yet).
After a campaign in which we heard way too many old men talking about rape and what women’s bodies can and can’t do, it’s nice that the female (and female-friendly!) candidates came out on top. Guess that war on women didn’t work out so well after all.