Skip navigation!
Story from Washington, D.C.
No, it's not just you — we've all noticed the influx of youngsters dominating our happy hours, flooding Dupont on Saturday night, and just generally being, well, younger than us. And, as it turns out, there is now scientific proof to back up our theory. According to a new study by American Community Survey (which records ebbs and flows of population growth), Washington, D.C. has seen more young people flock to the area in the past three years than any other major metropolis.
The District has been a magnet for college students (and, in turn, college grads) for quite some time now, but experts believe the recent overload is due to the economy — specifically, job opportunities. Although by no means have we been immune to employment issues, our fair city has been chugging along pretty well. So, while some of us may shudder at the thought of our neighborhood coffee shop swarming with hungover early 20-somethings on Sunday morning (goodbye, fashion-mag-and-biscotti routine!), it's hard to argue with the overal benefit of the youth movement. After all, it's a sign of the times, and the times are good.
Advertisement
Tell us, what do you think of the age drop — are you mourning the loss of the last frat-bro-free 'hoods, or embracing change? (Washington Post) 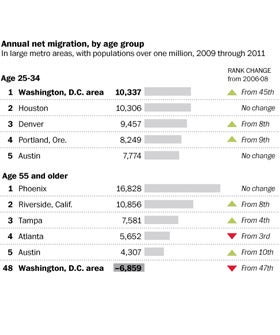