Skip navigation!
Story from Living
Collage BY ANNA JAY.
I’ve spent the last two years doing a deep dive into wedding culture, the institution of marriage and my changing attitudes to this thing I always wanted but had come to politically and intellectually loathe. I spoke to people who’d done it differently, people who'd done it traditionally, people who'd done it with four people. I spoke to people who’d married themselves, a woman who married a ghost. I spoke to the Westboro Baptist Church and Candace Bushnell, the original Carrie. I spoke to my friends, my boyfriend, my parents, his parents. But through all this research, the one thing I didn’t think about, not until I was nearing the deepest part of my dive was: who is a wedding for?
Advertisement
Portia, a woman I spent a while with for one of the chapters of my book, First Comes Love, got divorced after what had appeared to be a perfect marriage. They have three kids, all brilliant; a perfect home. They were fabulous, fascinating, chic, wealthy. If you were to draw a picture-perfect marriage, theirs would have been it. But that picture would be a lie. Not because it was awful at all but because, to paraphrase, Portia told me that so much of her marriage was scrubbing away the imperfections for the sake of an audience. She told me that after marriage, she felt something psychologically shift within her, that you and your spouse become a sort of team, sealed by the social code of matrimony.
I was fascinated by this and I started to observe it among my married friends: changes in how they talked about their partners. Where it would have been fine to criticise or complain before, once there was a ring on the finger they felt it was no longer acceptable to moan or bitch in the same way.
And so I got to thinking about audiences. About how this dynamic all begins on the wedding day: a day when you, in front of all your loved ones, the law and God (if that’s your jam), stand up and vow to honour, obey, cherish this person in front of you. And while indeed this is, even for a cynic like me, a really beautiful moment, one that makes everyone cry, the public nature of it also creates an odd contract of pressure. One made not only between you and your partner but between the couple and the audience. And that's a hard contract to break.
Advertisement
So while I found myself asking who is a wedding for? I found myself also asking about a lot of the public-facing practices we’ve come to see as analogous to love. Posting pictures on social media of you and your partner above the caption ‘tacos with this one’, saying ‘we’ even when it’s just you, tidying the house before guests come round. So much of it all is for an audience.
Now, that’s no bad thing necessarily. Sometimes we need an audience – god knows life would be dull if there was no one watching. And perhaps, in a culture so terribly repressed as the one here on Brexit Isle, a little public display of affection never goes amiss. But I found myself wondering if perhaps we are all watching the wrong thing, all performing the wrong thing.
Indeed love should be celebrated but given the statistics on how many marriages are happy — with half of marriages ending in divorce and a lot of the intact ones ending up miserable  — why do we spend so much time celebrating a moment which often binds us into this contract of pressure?
Last week I was messaging a friend who is anti-marriage. Her fantasy is to have a short, sharp marriage and a long, glamorous, performative divorce. While that’s a deeply fabulous option, my hope is that as a generation which has an opportunity to see the above statistics and make informed decisions on the ways we organise our future, we might alter the place and priority of marriage in our emotional biographies. We might become more responsible with the contracts we create – as audience members and as the performing partnership – and understand that marriage isn’t infallible, and that complaining about your spouse the way you did before you were married might be key to becoming one of the happily ever after. 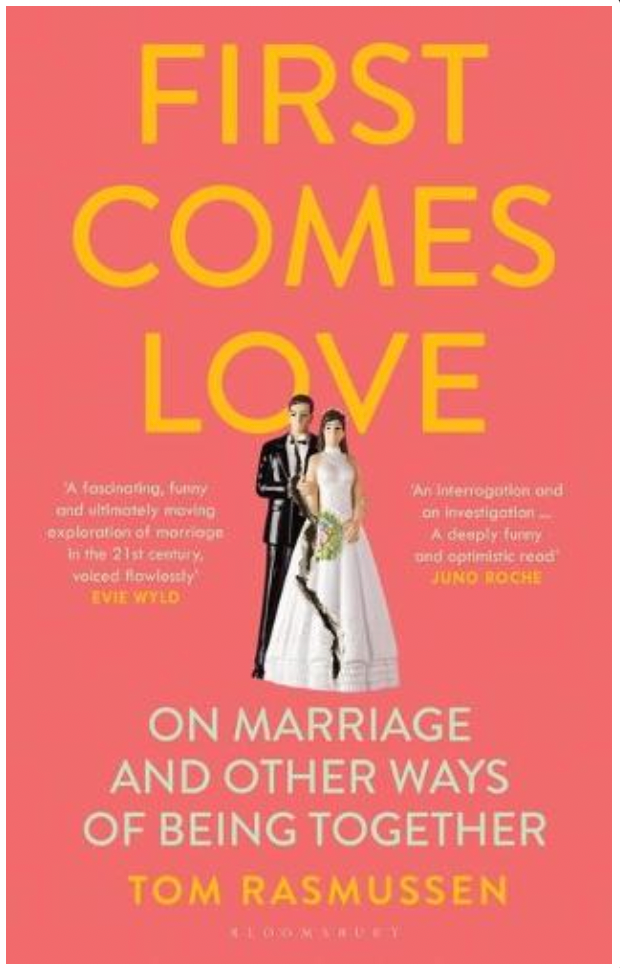 Bloomsbury Publishing
First Comes Love – tom Rasmussen
£13.94
bookshop.org
Not Your Token Asian
South Asian Women Are Deleting Dating Apps & They Couldn’t ...
Every few weeks, Malvika Sheth can be certain of one thing — she’s going to get a reminder from her parents. It might come through a WhatsApp message,
by Katherine Singh
Second Gen
Grieving Together, But Apart: How I Set Boundaries When My Father...
Last June, as I decorated the hallway of my home with yellow and blue balloons for my master’s graduation, my uncle called to say that my father had pass
by Sarah Samuel
Somos Latinx
Monarch Butterflies Carry the Souls of Our Ancestors. Raising The...
Every autumn, monarch butterflies make a miracle, travelling more than 2,000 miles from Canada, across the United States, and into the Oyamel Fir Forests o
by Sofía Aguilar
Advertisement
Unbothered
Mama & Me: An Ode To The Grandmother Who Loved Me When My Mother ...
I’ve spent my entire life yearning for love. In cocktail conversations and other interactions in which I’m trying to be charming, I like to blame this
by Ishena Robinson
Weddings
What 8 Women Wore To Their Legal Wedding Ceremony
by Sadhbh O'Sullivan
Pop Culture
We’re All Girlies Online, Whether We Want To Be Or Not
Every week a new word or term crops up online, a thousand thinkpieces are written and then it disappears, replaced by a new one just as quickly. But ‘
by Nana Baah
Unbothered
TikTokers Are Picking “Baddie Friends” Based On Attra...
Here’s one way to alienate yourself from your current friendship group: announce to God and the entire internet that you desire a whole new set of friend
by L'Oréal Blackett
Single Files
My Immigrant Parents Want Me To Settle Down — & I Will, But IR...
“Marriage is not a business deal,” I repeat often and fervently to my parents. They consistently reply to me in mindless unison: “We just want you to
by Jessica Thevarajah
Relationships
Ask A Therapist: I’m Terrified To Fart In Front Of My Partner – I...
Ever wondered what you’d say to a therapist, given the chance? We asked Dr Sheri Jacobson, a retired psychotherapist with over 17 years’ clinic
by Sadhbh O'Sullivan
Relationships
17 Women In Long-Term Relationships Tell Us How Their Sex Lives H...
by Maggie Zhou
Unbothered
My Traumatic First Birthing Experience Led Me To Embrace Honesty ...
Unbothered’s Birth Rights acknowledges inspiring mothers and showcases the beautiful diversity and depth of Black parenthood. As Black birthing peopl
by Enocha Tellus
Unbothered
I Was Still A Kid When I Had My Baby — Now We’re Growing Up Together
Unbothered’s Birth Rights acknowledges inspiring mothers and showcases the beautiful diversity and depth of Black parenthood. As Black birthing peopl
by Chamar Moore
Advertisement
Advertisement