Skip navigation!
Story from Style
Photo: ANDY BUCHANAN/POOL/AFP/Getty Images.
Princess Diana’s style throughout the ‘80s and ‘90s will always be in fashion — and Kate Middleton knows it. On Monday, the Duchess of Cambridge wore a royal blue suit that bore a striking resemblance to one worn by her late mother-in-law 30 years prior.
During a trip to Edinburgh, Scotland, with Prince William, Middleton donned a blue, double-breasted Zara blazer with gold buttons (similar here) and a matching pleated skirt from Hope. While Diana’s version, which she wore on a trip in 1992, was also made up of a double-breasted suit jacket decorated with gold buttons and a pleated skirt, it was more in line with the style at the time and slightly oversized, rather than fitted. That, and Middleton chose a brown, suede clutch purse and matching pumps, whereas Diana stuck with the royal blue color palette, straight down to her accessories.
Advertisement
Photo: ANDY BUCHANAN/POOL/AFP/Getty Images.
This is hardly the first time Middleton has seemingly recreated a look from Diana’s wardrobe archives. Middleton’s velvet, strapless gown at the 2011 Sun Military Awards mirrored the one worn by Diana at London’s Goldsmith’s Hall in 1981. Meanwhile, in 2018, Middleton wore a blue polka dot Prada dress with a white collar for Prince Charles’ 70th birthday portrait that was the modern-day equivalent of Diana’s from 1985. A year later, in 2019, the Duchess was photographed dropping Princess Charlotte off on her first day of school, while wearing a pink, floral dress that closely resembled one Diana wore to take Prince Harry to school in 1992.
And if you, like Middleton, want to get the Diana look, the Duchess’ blue Hope skirt is still available. If the past is any indication, though, it won’t be for long.
At Refinery29, we’re here to help you navigate this overwhelming world of stuff. All of our market picks are independently selected and curated by the editorial team. If you buy something we link to on our site, Refinery29 may earn commission. 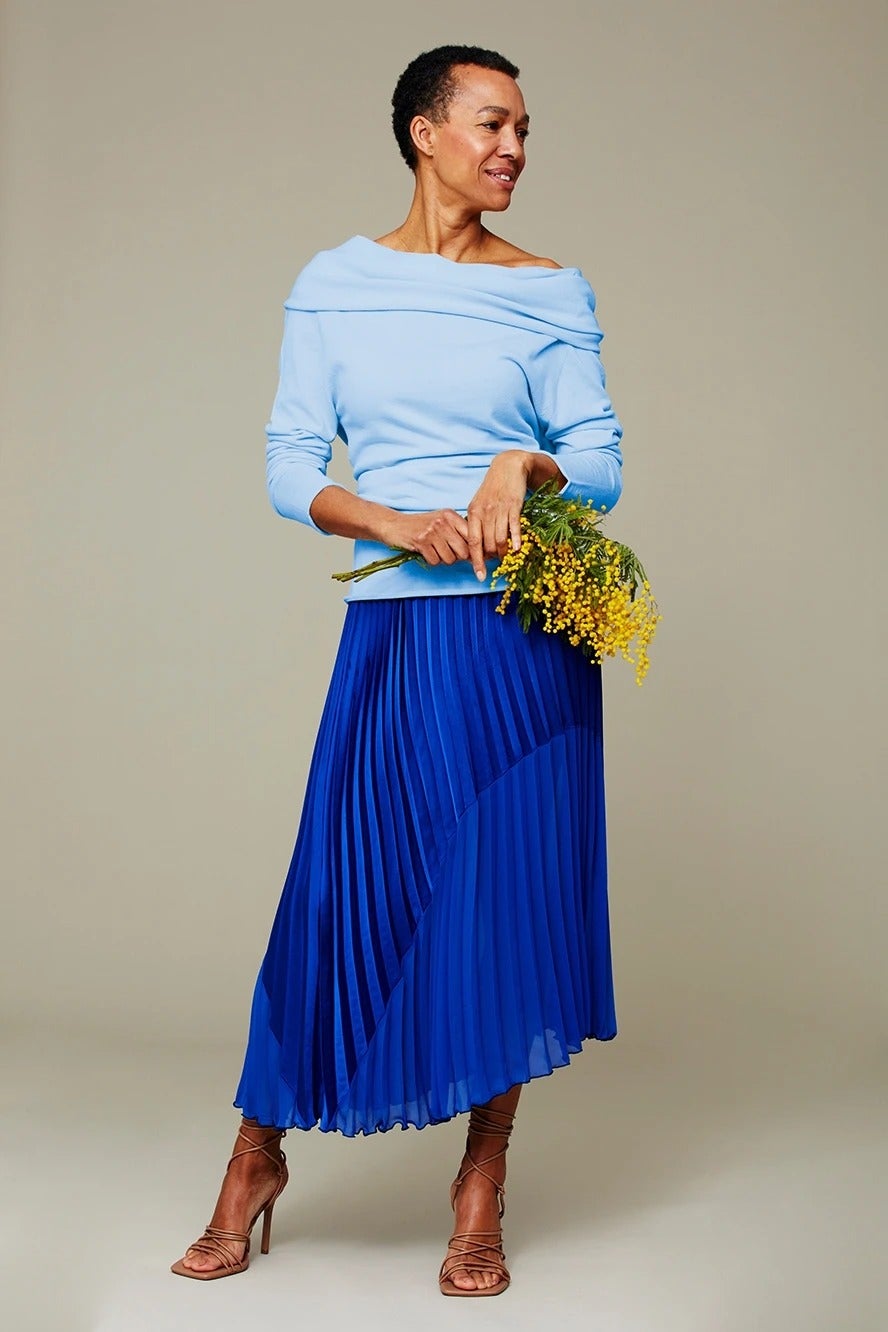 Hope
The Contrast Hem Pleated Skirt - Cobalt
£95.00
Hope
Fashion
Katie Holmes Paired Her Go-To “Ugly” Sandals With Thi...
If you thought the cut-out trend would fade out soon, think again. On Sunday, during a coffee break in Manhattan, Katie Holmes was spotted giving the stree
by Eliza Huber
Fashion
Could You Walk In Lady Gaga’s Ultra-High Platform Boots?
On Monday, the singer stepped out in her hometown wearing a pair of sky-high platform shoes from Pleaser, paired with a black Magda Butrym A-line dress and
by Frances Solá-Sant...
Fashion
What Does It Mean That Carrie Bradshaw Is Wearing Her Flower Pin ...
Over the weekend, the cast of the Sex And The City reboot, And Just Like That, was spotted in full fashion form at the Manhattan School of Music in Morning
by Eliza Huber
Advertisement
Celebrity Couples
J.Lo Steps Out With A Necklace That Makes Bennifer Official-Official
As if their steamy makeout photo wasn’t enough proof that Jennifer Lopez and Ben Affleck are in fact back together, the newest addition to Lopez’ jewel
by Eliza Huber
Fashion
Issa Rae’s Surprise Wedding Included Two Vera Wang Dresses
On Sunday, Issa Rae married her longtime partner Louis Diame. She wore a custom Vera Wang wedding dress that made the actress look like a real-life princes
by Frances Solá-Sant...
Celebrity Style
Dua Lipa Paired A Neon Suit With This Season’s Hottest Swim Trend
Who says you have to be any wear near a body of water to wear a bikini top?  On Friday, Dua Lipa shared her latest night-out look on Instagram, includ
by Frances Solá-Sant...
Britney Spears
What Britney Spears’ Style Taught Me About My Own Coming Of Age
In the wake of the Framing Britney Spears documentary and with the #FreeBritney movement gathering momentum, the world is revisiting the various dehumanisi
by Frances Solá-Sant...
Fashion
Chain Belts Are Trending, Thanks To Olivia Rodrigo
Reigning queen of the ‘90s style comeback Olivia Rodrigo has championed many trends from the decade — including slip dresses, combat boots, and opera g
by Frances Solá-Sant...
Style
Lizzo’s Love For Itty-Bitty Bags Is Only Getting Bigger
Hey @lizzostinybag, it’s time for an update. This weekend, Lizzo reminded us of her obsession with itty bitty bags in a four-photo Instagram slideshow. I
by Eliza Huber
Fashion
The Fendi Baguette Is Back For The Sex And The City Reboot
It’s been more than 15 years since we last saw Carrie Bradshaw and her go-to Fendi Baguette bag on TV. But the upcoming release of Sex And The City’s r
by Frances Solá-Sant...
Fashion
10 Influencers From Around The Country Show Us Their ‘Freed...
Each time COVID-19 rates dropped over the last year and a half, conversations would inevitably move towards the return to ‘normality’. But with spi
by Alicia Lansom
Fashion
With A New Clothing Collection, K-Pop’s Ten Lee Takes Fans Inside...
“When you learn languages, you learn different ways to express yourself, so I feel those different expressions come through in what I create."
by Natalie Morin
Advertisement
Advertisement