Skip navigation!
Story from Beauty
It's hard to keep up with the wealth of creative beauty trends each time London Fashion Week comes around. Though they're all incredibly Instagram-worthy, lots of them can seem a little too adventurous for everyday wear. Take gold leaf bronzer, for example. Totally mesmerising but likely not a look you'd consider while hanging out with friends.
So far this season, it's all about skin. Specifically, keeping it relatively bare but seriously amping up the dewiness. It seems we've graduated from the school of 'glass skin', though (much too glinty and expensive to achieve thanks to all the layering). Instead, makeup artists at London Fashion Week Spring/Summer 2023 are championing another glowing skin trend, and it's probably the easiest to achieve yet.
Advertisement
Enter: 'laminated skin'.
At Refinery29 Australia, we’re here to help you navigate this overwhelming world of stuff. All of our picks are independently selected and curated by the editorial team, but we may earn commission or other compensation from the links on this page.
Photo by Jacqueline Kilikita
Courtesy of Terry Barber, MAC's director of makeup artistry and lead makeup artist at this year's Fashion East show, laminated skin is the "next level of glow" and it emulates...sweat.
"The skin for the season is sweaty, which is no longer a negative," Terry told Refinery29. "All the designers I'm working with are talking about sweaty skin, like you've just come out of the ocean on holiday, or been on a dance floor — or you've just had sex." Terry says it's not just about highlighted cheekbones or powdery, sparkly finishes, which can be typical of highlighters. Instead it's about using creamy products to create what he calls a "hyper-moisturised" and "laminated" base.
Terry and his troupe of professionals, including pro team artist Mus Emin, enlisted MAC Studio Radiance Face and Body Radiant Sheer Foundation, $57. "I actually used quite a lot of it," Terry told R29, "as Face and Body is good when you put a lot on. It absorbs and makes the skin look laminated." The second step is a generous veil of MAC Fix+ Magic Radiance, $49, which is a dew-boosting setting mist. "This baby is the key to the whole show," said Terry. "When we did the makeup we doused the models' faces in Magic Radiance and let it sink in." Terry says this is particularly beautiful over foundation as it lends a "shrink wrap shine" and achieves that glossy, laminated look. Makeup artists spritzed the mist everywhere. "I'm not afraid of shine in the middle of the forehead or on the nose," said Terry. "This is a really beautiful laminated, hyper-moisturised glow all over."
Advertisement
Photo by Jacqueline Kilikita 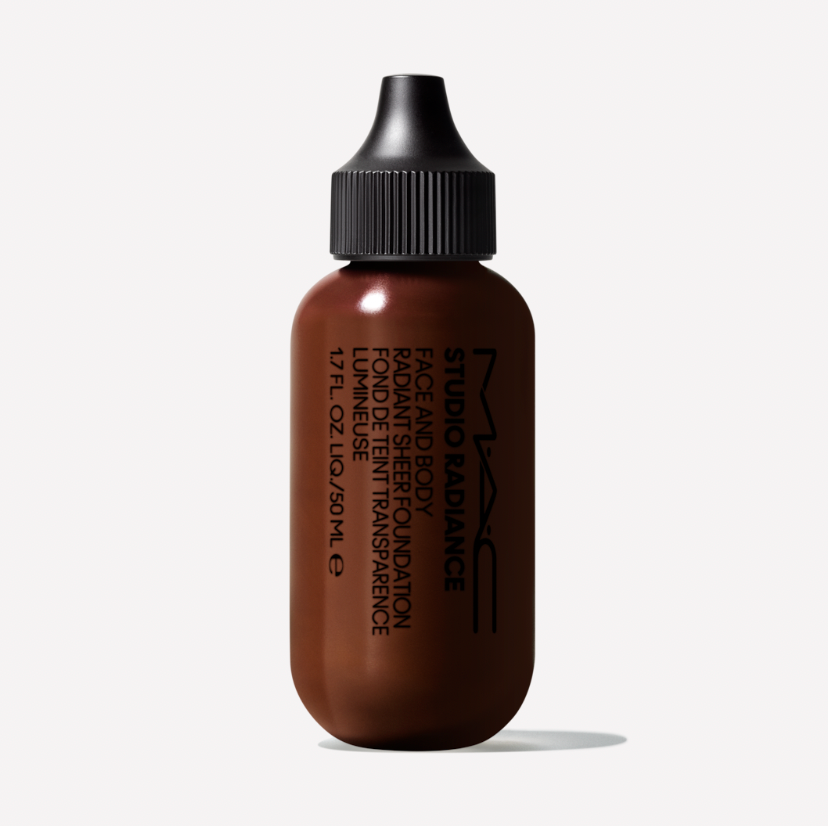 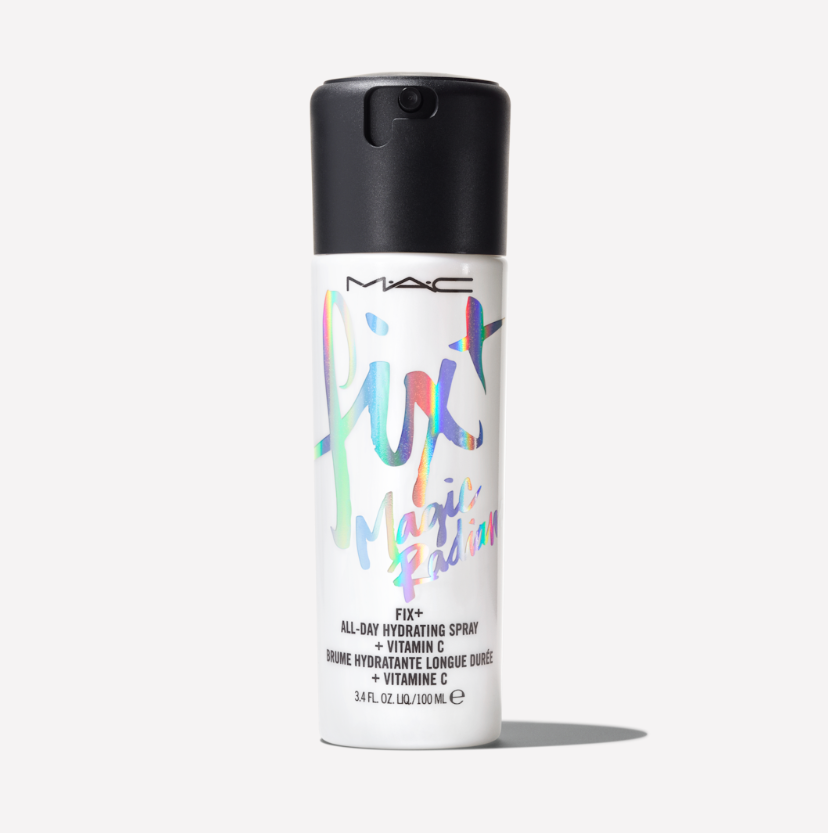 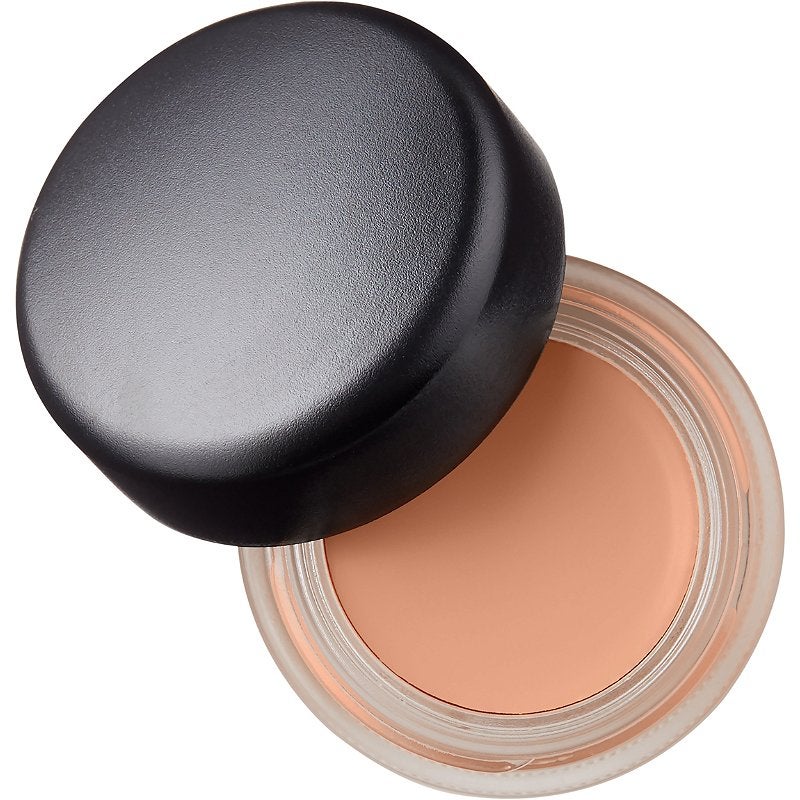 MAC Cosmetics
Pro Longwear Paint Pot
C$28.00
MAC Cosmetics
Blush was shelved in favour of a slick of cream contour, or in this case eyeshadow: MAC Pro Longwear Paint Pots, $39, depending on the model's skin colour. Terry extolled the virtues of Groundwork and It's Fabstract in particular, as they are natural skin shades and can be dialled up or down depending on your skin tone.
"I did a little bit of invisible contouring to create carved cheekbones," said Terry, "a Grace Jones-y, ski slope cheekbone." A touch of the same shade on a dense eyeshadow brush created what Terry called a "little stain" around the eye, to give shape to the face. "It's a natural Fashion East show this time, but this makeup is more of a mood rather than a big statement," said Terry.
If you have acne-prone skin or uneven skin texture, don't worry. Glossy, laminated skin is for everyone — it's just about tailoring your products. Avoid an oily base and opt for a lightweight gel moisturiser beforehand.
Photo by Jacqueline Kilikita
"When it comes to uneven skin or acneic skin, I would avoid frosted powders entirely," advised Terry. "You're great with something like the Fix+ spray because it has essential oils in it so when the moisture sinks in, it leaves a fine layer, which gives you a smooth surface glow." In comparison, a product with shimmer particles can collect around skin texture. "This makeup look just creates a sheen," said Terry.
Advertisement
Laminated skin is good news for those with oily complexions, too, as there's no need to use powder or reapply your products during the day. Your natural facial oils only enhance the glossy, laminated effect. "We're in a moment where you let makeup sink in rather than top it up," said Terry. "No one wants too much density. This is what naturally happens to the skin," he continued. It's a look that evokes images of models walking through a rainforest, getting out of a sauna or having just been to the spa.
We're sure Terry won't be the last makeup artist to shine a spotlight on glossy faces. Any trend which involves just a handful of products, requires little to no topping up and champions oily skin in the process certainly gets our vote.
Want more? Get Refinery29 Australia’s best stories delivered to your inbox each week. Sign up here!
Beauty
Smells Like Summer: 14 Of The Best Perfumes This Season
by Esther Newman
Beauty
‘Skin Flooding’ Is The TikTok Hack My Dry Skin Needed
Welcome to Beauty In A Tik, where each week we put TikTok’s viral beauty hacks and innovative trends to the test. At Refinery29 Australia, we’re he
by Jacqueline Kilikita
Beauty
28 Festive Nail Art Ideas That Are Not Snowmen
by Caitlin Kenny
Advertisement
Beauty
The Ultimate Christmas Gift Guide For The Beauty-Obsessed In Your...
by Jacqueline Kilikita
Beauty
You’re Probably Storing Your Perfumes Wrong
TikTok is saturated with shelfie videos that show off enviable perfume collections and tips on how to make your fragrance stretch longer, and work harder,
by Millie Roberts
Beauty
6 Things Almost Everyone Gets Wrong When Treating Tired Eyes
A recent editorial in New York Magazine‘s The Cut addressed one of the most relatable questions that plagues us this time of year: ‘How do I lo
by Megan Decker
Beauty
R29 Editor Picks: The Fashion & Beauty Items We’re Buying In Dece...
by Millie Roberts
Fragrance
20 Fragrances For When You Just Want To Smell Clean
by Karina Hoshikawa
Beauty
Blooming Gel Is The Nail Trend You’re About To See Everywhere
View this post on Instagram A post shared by J3N NAILED IT (@j3nnailedit) Nail trends come and go quicker than we can keep up with. Some have a short shelf
by Tori Crowther
Christmas
9 Versatile Gifts That’ll Work For Anyone On Your List
At Refinery29 Australia, we’re here to help you navigate this overwhelming world of stuff. All of our picks are independently selected and curated by the
by Eloise Goodman
Beauty
The Cause Of Your Dry Lips Is Actually Your Lip Balm
At Refinery29 Australia, we’re here to help you navigate this overwhelming world of stuff. All of our picks are independently selected and curated by the
by Jacqueline Kilikita
Beauty
9 Alternatives To Lipstick When It Just Doesn’t Agree with Your Face
by Millie Roberts
Advertisement