Skip navigation!
Story from Washington, D.C.
The Olympics are a time to celebrate your country, your country's athletes, and everything that goes with it — but apparently, this year, patriotic mentality doesn't extend all the way to the uniforms. For the upcoming London Games, all-American brand Ralph Lauren will be outfitting our teams in red, white, and blue, but the stars and stripes will be the only American thing about the duds. To the dismay of many citizens and lawmakers, the warm-ups (which will be worn for the closing ceremony, as well as during breaks from competition), were made in China. The controversy came to a climax on Thursday, when prestigious lawmakers on the Hill blasted the Olympic Committee (via a not-so-subtle letter) for failing to support American clothes makers.
Advertisement
The senators argued that the athletes should be repping the best of U.S.A.-made goods, and that their head-to-toe Ralph Lauren should also be head-to-toe American. A Ralph Lauren spokesperson declined to comment on the sitch, and we, frankly are a bit confused. After all, what's more American than RL himself?
We totally understand Washington's concern over this snafu; after all, this is as important a time as ever to support the good ol' U.S. of A. That said, we also realize that there may be far more important issues to focus on come opening night. What do you think: Is this a legitimate concern, or should Olympic controversies be left to doping allegations and underage competitors? (Washington Post) 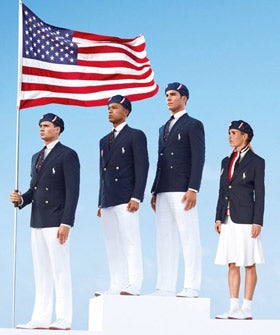