Skip navigation!
Story from New York
While K. Stew is known for drumming up mucho controversy, at least we know she's been uhh, feeling herself lately. But we mean this in the most literal sense. Drumming up publicity for her upcoming movie, Snow White and The Huntsman, Kristen poses for Elle's June issue... twice. Once as the leather-skirted girl we're most familiar with, and once as a slick, (Balenciaga) suited boy-Stew. And the two are definitely hitting it off. What do you think of the boy-meets-girl-meets-reflection pic? To be fair, we're kind of digging it (and really want to see that movie!). Weigh in on the look-alike couple — and Stewart dressed as a dude — in the comments below. (MTV) 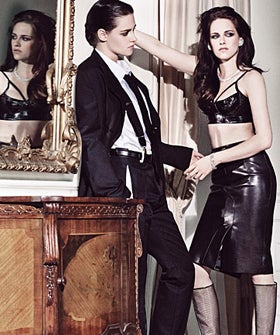