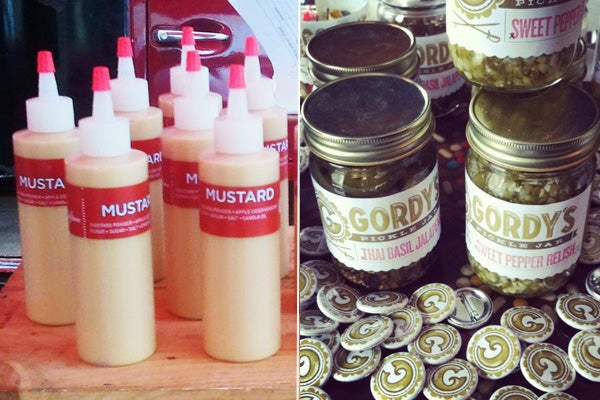 The term "startup" has a distinctive tech-world association, but here in Washington, ambitious entrepreneurs are putting a culinary spin on it. Right now, the made-in-D.C. food scene is booming, and homegrown condiments — think sauces, relishes, and other add-ons — are playing a big part. Read on to discover our favorite saucy offerings that are being whipped up in and around the District.

Snake Oil Hot Sauce
James Beard Award-nominated chef Spike Gjerde of Baltimore’s Woodberry Kitchen makes a fruity, fiery hot sauce that is amazing with oysters, and the backstory is almost as good as the product. The “fish” peppers that Gjerde uses for the sauce are a treasured African American heirloom variety with more than 200 years of history in the Chesapeake region.

Red Apron Hot Mustard
With the opening of three new butcher shops this year, Red Apron's Nathan Anda is on the road to becoming D.C.’s undisputed King of Meats. This delicious hot mustard has a hint of sweetness that will lull you into complacency before blasting open your sinuses.

Gordy’s Pickle Jar Spicy Giardineira
In just over a year, Gordy’s Pickle Jar founders Sarah Gordon and Sheila Fain have expanded their business to six states, in addition to the District. Their latest product, spicy giardineira, is a play on the classic Italian relish that adds pop to sandwiches, salads, and charcuterie plates.

Available online and at a variety of retailers.

Cava Mezze Harissa
D.C. native Dimitri Moshovitis opened his Greek-inspired Cava Grill in 2006, and six years later, he’s overseeing a budding empire that will soon include three restaurants, five fast-casual grills, and Cava Mezze Foods, a wholesaler of dips and spreads. Moshovitis’ harissa, which is made from copious amounts of red pepper and tomatoes, is a crazy-hot accompaniment for Mediterranean dishes of all kinds.

Available at a variety of retailers; see a full list here.

Uncle Brutha's #10 Hot Sauce
Friends of Brennan Proctor, a D.C. native who worked in Los Angeles for years as a sound engineer, had to mercilessly pester him to bottle and sell his rich, garlicky, smoky sauce. He moved back to the District to launch Uncle Brutha’s and open a “Hot Sauce Emporium” a decade ago, and while the shop closed in 2007 after a devastating fire, the company is still going strong.

Pork Barrel Sweet BBQ Sauce
The Pork Barrel BBQ enterprise, which encompasses sauce and rub products, a BBQ competition team, and an eponymous restaurant in Alexandria, is the brain child of former Senate staffers Brett Thompson and Heath Hall. Their Sweet BBQ Sauce has been dubbed one of the best in the country by a bevy of national mags.

Available at Pork Barrel BBQ and a variety of other locations; see a full list here.

Seasonal Pantry Pickled Peppers
The shelves at chef Dan O’Brien’s shop are always home to a rotating cast of condiments, but the fresh, bright, spicy flavors of the peppers he pickles are a highlight. Just don’t expect to get the same mélange of peppers twice, because O’Brien’s mantra is to work with what’s local and seasonal from purveyors like Path Valley Farms in Pennsylvania.

Capital City Mumbo Sauce
In the long and unfinished debate about whether D.C. has an indigenous cuisine, only half-smokes and the mysterious mumbo sauce stand out. Area native Arsha Jones founded the Capital City brand to try to broaden interest in the sauce — a curious amalgamation of barbecue, buffalo, and sweet-and-sour flavors — outside of the city's carry-out joints.

Victor Albisu's Chimichurri
Chef Victor Albisu, a master of South American-style grilled meats, is set to open two hotly anticipated restaurants soon — Taco Bamba in Falls Church and Del Campo in Penn Quarter. Both menus will naturally feature chimichurris (salsa verdes) of all kinds, but you’ll have to call his mother’s meat market, Plaza Latina in Falls Church, to see if you can buy a batch of his cilantro-and-garlic-laced original recipe.