Skip navigation!
Story from Style
Photo: Taylor Hill/FilmMagic.
On Thursday, Taylor Swift announced the release of her ninth studio album, as well as a new music video for the track “Willow.” The album, titled evermore, as well as the accompanying music video, dropped at midnight last night. In “Willow” Swift is wearing a lace gown that, as many pointed out, could double as a wedding dress. And it is getting special attention, not just because many people are speculating that the dress is a hint at the announcement that Swift and boyfriend Joe Alwyn are engaged (or, perhaps, already married), but also because the dress is still, somehow, available to buy.
Advertisement

Designed by luxury Australian brand Zimmermann, the Charm Star dress is ivory and features a V-neck, lace paneling, and a bow on the left shoulder. According to Matches Fashion, which currently has the Charm Star dress in stock for a tasty £2,400, designers Nicky and Simone Zimmermann were inspired by "lucky charms and fortune telling" for their “ethereal” fall ‘20 collection. (Did Taylor Swift read that description or what?)
Fans of Swift seem convinced that the dress is pointing to an engagement or wedding announcement.“I think Taylor is going to reveal soon she’s engaged (or even married)," tweeted @taylorsfairies. "The dress of the “Willow” MV gives me wedding dress vibes.” Another fan, @tayloredrep13, wrote: “Is @taylorswift13 going to share she’s married? That’s totally a wedding dress look for the “Willow” music video and evermore is like (for) ever more…” As Swift proved with Thursday’s announcement, you can never be sure what the singer is up to. That said, we’ve been trying to hear wedding bells in deafening silence for years now. In 2018, after the release of Lover, many speculated that she was engaged. Similar rumours about the couple swirled, too, when folklore was released. 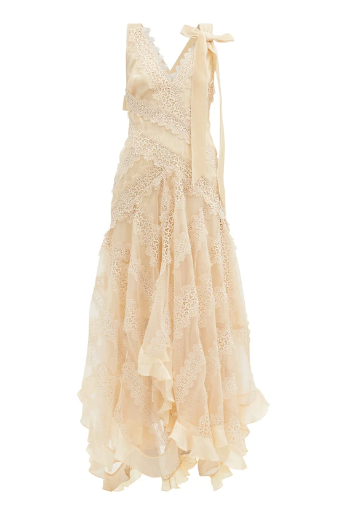 Zimmermann
Zimmerman Charm Star Dress
£2400.00
Matches Fashion
While the look is still available, it's not cheap. Currently, the dress retails for £2,400. That said, if the rumours swirling around Twitter are true and Swift is using fashion to hint at a trip down the aisle, then a four-digit price tag isn’t entirely out of the question.
Until we get two thumbs up from Swift, herself, we’ll assume that she just liked the dress. Rumor or not, though, wearing a Swift-approved dress on your wedding day will never go out of “Style.”
At Refinery29, we’re here to help you navigate this overwhelming world of stuff. All of our market picks are independently selected and curated by the editorial team. If you buy something we link to on our site, Refinery29 may earn commission.
Dedicated Feature
Beabadoobee’s Rules For Sustainable Style
In our highly visual, social media world, it’s understandable that many young music artists choose to outsource their every fashion choice to the stylist
by Natalie Gil
Unbothered
What Black Creators Can Learn From Signed, Blake
S
by Venesa Coger
Fashion
‘Peg The Patriarchy’: Activism Fashion Has Its Moment At The 2021...
Bold statements and shock-and-awe looks are what the Met Gala is all about. But this year’s red carpet was stepped up a notch with a couple of powerf
by Maggie Zhou
Advertisement
Fashion
Beyoncé Channelled Audrey Hepburn In A 128-Carat Diamond Necklace
One of Breakfast at Tiffany’s most memorable scenes features Holly Golightly (Audrey Hepburn) singing Henry Mancini’s “Moon River” while strumming
by Frances Solá-Sant...
Fashion
Megan Fox Wore A Pin Top With Summer’s Most Ubiquitous Trend
With stamps of approval already pressed and sealed from Bella Hadid, Hailey Bieber, and Ariana Grande, it was only a matter of time before another celebrit
by Eliza Huber
Fashion
Rihanna Wore TikTok’s Favourite Going-Out Top With Low-Rise...
Rarely does Rihanna succumb to fads, likely because she’s often the one starting them. Yet, the billionaire fashion-beauty mogul’s latest look featured
by Eliza Huber
Unbothered
Ciara On Being A Mum, A Mogul & Married To Russell Wilson: “It’s ...
As the world slowly reopens, it’s no secret that everyone has been struggling to figure out how to live in this (almost) post-pandemic reality and get ba
by Maiya Carmichael
Fashion
Katie Holmes Paired Her Go-To “Ugly” Sandals With Thi...
If you thought the cut-out trend would fade out soon, think again. On Sunday, during a coffee break in Manhattan, Katie Holmes was spotted giving the stree
by Eliza Huber
Fashion
Could You Walk In Lady Gaga’s Ultra-High Platform Boots?
On Monday, the singer stepped out in her hometown wearing a pair of sky-high platform shoes from Pleaser, paired with a black Magda Butrym A-line dress and
by Frances Solá-Sant...
Fashion
What Does It Mean That Carrie Bradshaw Is Wearing Her Flower Pin ...
Over the weekend, the cast of the Sex And The City reboot, And Just Like That, was spotted in full fashion form at the Manhattan School of Music in Morning
by Eliza Huber
Celebrity Couples
J.Lo Steps Out With A Necklace That Makes Bennifer Official-Official
As if their steamy makeout photo wasn’t enough proof that Jennifer Lopez and Ben Affleck are in fact back together, the newest addition to Lopez’ jewel
by Eliza Huber
Fashion
Issa Rae’s Surprise Wedding Included Two Vera Wang Dresses
On Sunday, Issa Rae married her longtime partner Louis Diame. She wore a custom Vera Wang wedding dress that made the actress look like a real-life princes
by Frances Solá-Sant...
Advertisement
Advertisement