Skip navigation!
Story from Style
Photo: Jim Bennett/Getty Images.
Michelle Obama closed out the opening night of the 2020 Democratic National Convention on Monday with a speech that somehow both calmed our nerves about the upcoming US election and impassioned us to build a world that we can be proud of. “If we have any hope of ending this chaos, we have got to vote for Joe Biden like our lives depend on it,” she said in her conclusion. And in true Obama fashion, words weren’t the only mode of expression she used. For the event, Obama wore a gold necklace that spelled the word “VOTE.”
Personalised for the former first lady by Jamaica-born, L.A.-based jewellery designer Chari Cuthbert, the necklace quickly became the talk of the internet, so much so that during the last hour of the convention, it was the top-trending search on US Google, according to CNN. Cuthbert’s brand, BYCHARI, which launched in 2012, specialises in custom-made pieces designed using top-grade materials. According to her website, Cuthbert’s creations are designed to uplift women, making them a favourite to many a powerful woman, from former Teen Vogue EIC Elaine Welteroth, who in 2016 became both the youngest and the first Black woman ever to hold the position in Condé Nast’s history, to now, Michelle Obama.
Advertisement
Photo: DEMOCRATIC NATIONAL CONVENTION HANDOUT/EPA-EFE/Shutterstock.
Obama’s personalised chain was crafted out of 14k yellow gold and costs £295. BYCHARI, though, also sells a pre-made VOTE necklace for £275. "I had created a VOTE necklace for the last election and knew I was going to do it again,” says Cuthbert in a statement. “As we started our outreach, I was honoured when Michelle Obama's stylist asked for one and am thrilled she is wearing it!” Obama paired the necklace with hoop earrings from the brand and a brown, satin wrap top from Nanushka, a sustainable label from Budapest.
This is hardly the first time that Obama and her longtime stylist Meredith Koop have chosen to champion independent brands for public appearances. Following her tenure as the first lady, Obama spotlighted Black-owned brands like Pyer Moss and Cushnie. Later, while traveling throughout Scandinavia for her Becoming book tour last year, Obama chose to wear local brands, including Danish sustainable label Stine Goya for her stop in Copenhagen; Stockholm-based brand Acne Studios in Sweden; and Dundas, a Norwegian label by designer Peter Dundas, in Oslo.
Even so, this sartorial move by the former first lady feels bigger and more significant than the rest, which explains why it’s garnering so much hype. With just 11 weeks until the 2020 US presidential election, time is of the essence — especially when President Trump is dead set on defunding the US Postal Service. Head over to bychari.com to get your very own VOTE necklace today.
At Refinery29, we’re here to help you navigate this overwhelming world of stuff. All of our market picks are independently selected and curated by the editorial team. If you buy something we link to on our site, Refinery29 may earn commission. 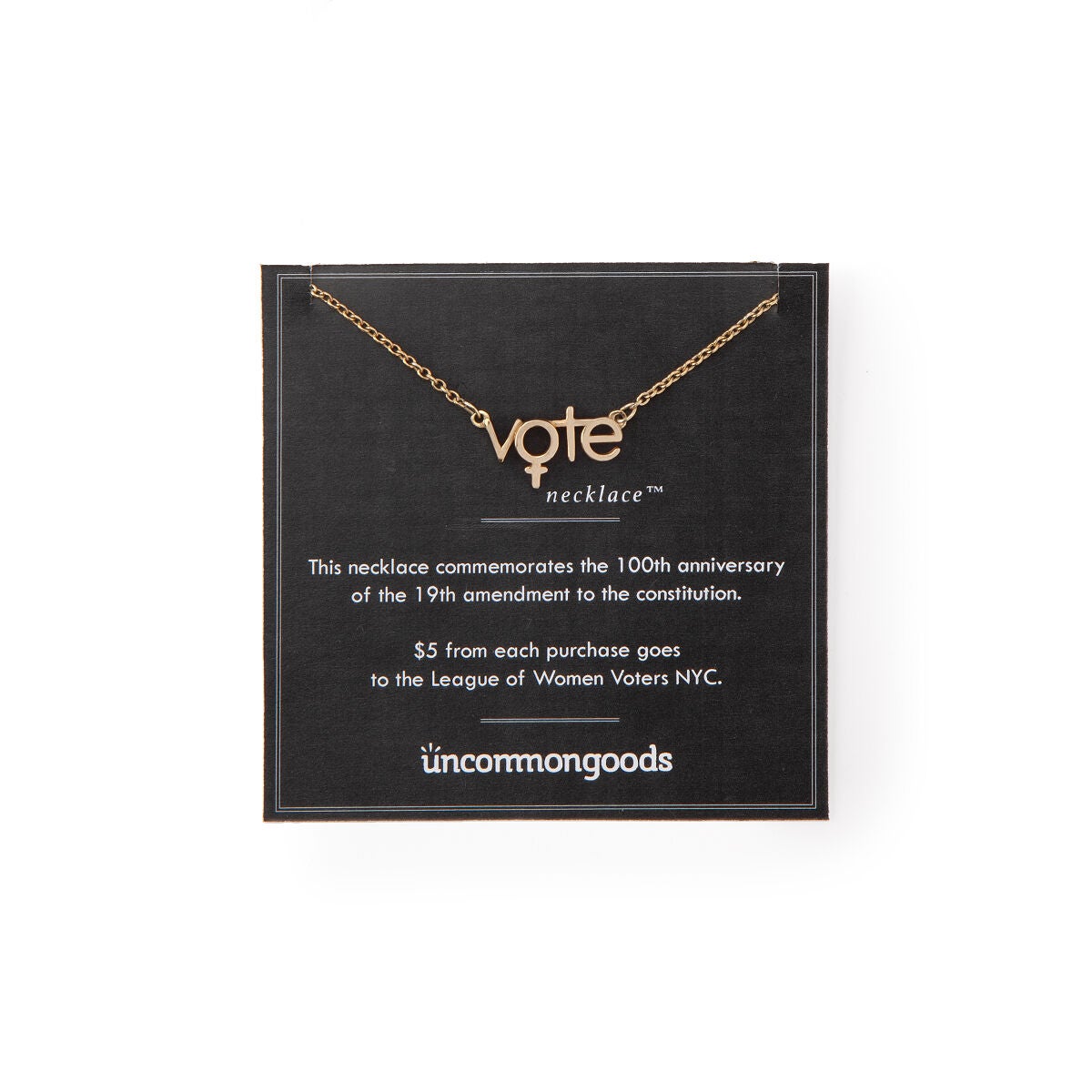 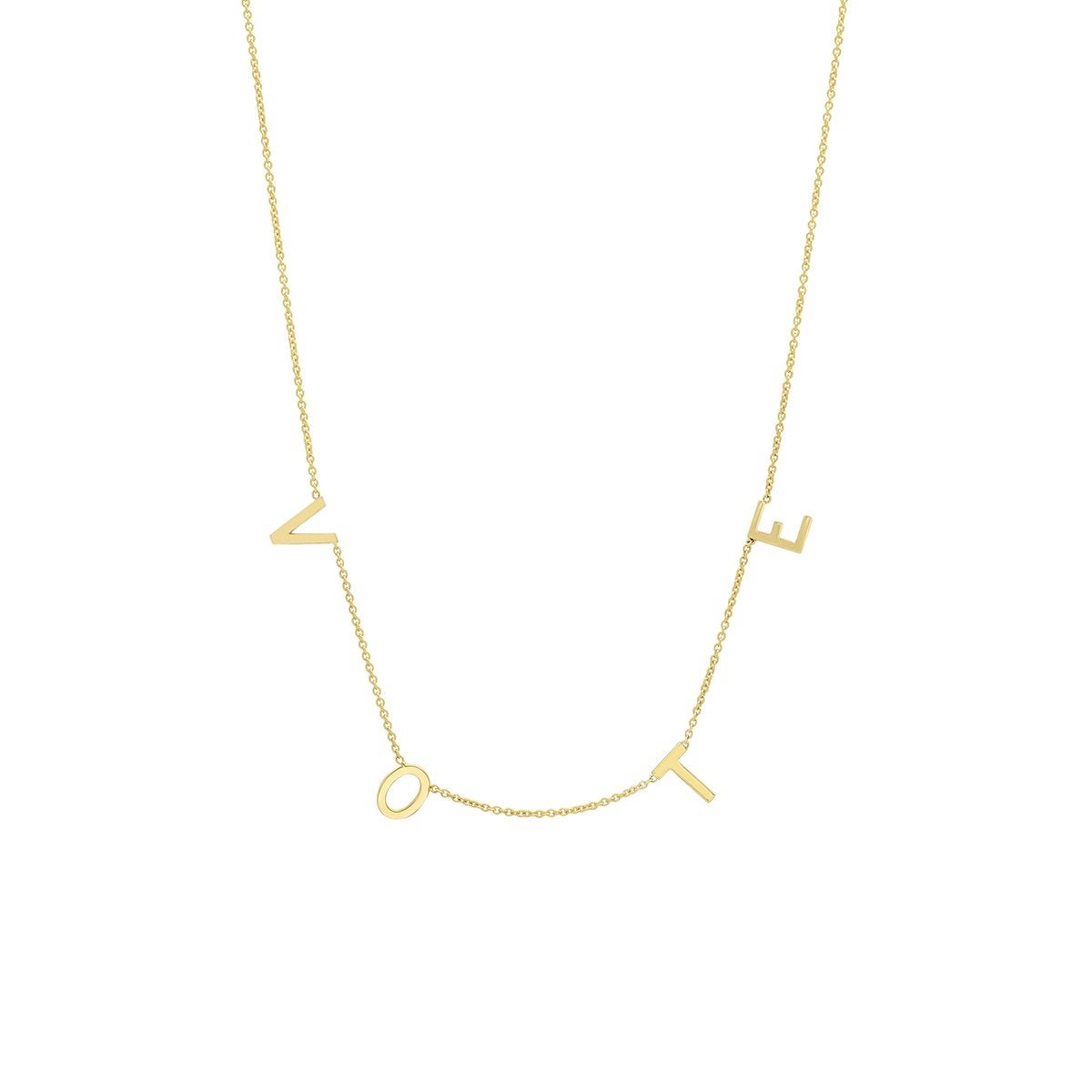 Bychari
Vote Necklace
£275.00
Bychari
Unbothered
Micaéla Verrelien Shares 3 Tips On How To Evolve As A Creator
The misconception about being a successful influencer is that you have to tie yourself down to one specific niche in order to gain popularity. But thatR
by Venesa Coger
Unbothered
Olivia Joan Went Viral Highlighting Her Grandmother’s Fabulous Wa...
When it comes to sharing fashion content across multiple social media platforms, clothing hauls are a crowd favourite. Usually, it’s a person talking abo
by Venesa Coger
Dedicated Feature
Cher Makes Us Feel – That’s Why She’s Perfect As The New Face Of UGG
I was seven when I became obsessed with Cher. It was late October and an Auto-Tuned voice came over the speakers in my grandma’s car: the drone and drop
by Tom Rasmussen
Advertisement
Unbothered
Rihanna Tells Us Why The IRL Savage X Fenty Experience “Wil...
When news broke that Rihanna had plans to open physical Savage X Fenty stores, many wondered what the shopping experience would be like. Its e-commerce sit
by Venesa Coger
Somos Latinx
In Celebration of Tatyana Ali’s ‘90s Fashion Looks
When The Fresh Prince of Bel-Air hit television screens on September 10, 1990, young viewers weren’t just howling with laughter at the smart humour of th
by Naydeline Mejia
Dedicated Feature
Winnie Harlow On Inner Confidence, Early Role Models & Living Una...
It’s said that confidence is the key to success. But that doesn’t mean it comes naturally for everyone. Between the ever-changing beauty standards pres
by Lola Christina Alao
Fashion
The Fendi Baguette Is Back For The Sex And The City Reboot
Update: Fendi has now re-issued Carrie Bradshaw’s famous purple, sequined Baguette bag, following the release of And Just Like That… on NOW T
by Frances Solá-Sant...
Dedicated Feature
Beabadoobee’s Rules For Sustainable Style
In our highly visual, social media world, it’s understandable that many young music artists choose to outsource their every fashion choice to the stylist
by Natalie Gil
Unbothered
What Black Creators Can Learn From Signed, Blake
S
by Venesa Coger
Fashion
‘Peg The Patriarchy’: Activism Fashion Has Its Moment At The 2021...
Bold statements and shock-and-awe looks are what the Met Gala is all about. But this year’s red carpet was stepped up a notch with a couple of powerf
by Maggie Zhou
Fashion
Beyoncé Channelled Audrey Hepburn In A 128-Carat Diamond Necklace
One of Breakfast at Tiffany’s most memorable scenes features Holly Golightly (Audrey Hepburn) singing Henry Mancini’s “Moon River” while strumming
by Frances Solá-Sant...
Fashion
Megan Fox Wore A Pin Top With Summer’s Most Ubiquitous Trend
With stamps of approval already pressed and sealed from Bella Hadid, Hailey Bieber, and Ariana Grande, it was only a matter of time before another celebrit
by Eliza Huber
Advertisement
Advertisement