Skip navigation!
Story from Living
The following is an extract from Black Girls Take World: The Travel Bible for Black Women with Boundless Wanderlust by Georgina Lawton
Restriction of movement is something many travellers may not have considered before COVID-19. Being able to go wherever, whenever has characterised the lives of those from so-called ‘western’ countries - it’s a type of passport privilege. But the pandemic has inverted this concept - suddenly those from formerly-powerful nations, such as the UK and US, are unable to cross borders into countries their governments had spent years restricting access from. (Life comes at you fast, eh?). But of course many Black travellers are familiar with the idea of restricted movement. From watching relatives struggle with visas to feeling surveilled, monitored or unwanted in some spaces abroad, this is a part of travelling while Black.

Black experiences abroad vary greatly depending on a myriad of factors such as accent, gender, nationality, wealth, skin tone and features. For Black women our presence abroad can elicit shock, awe and fascination in places where a Black woman travelling unaccompanied is seen as a novelty act. But – say it with me now – Black women deserve to go where we are not only tolerated but accepted and celebrated.
Advertisement

Travelling while Black is an incredibly enriching experience, providing you with the chance to educate and be educated, expand your cultural horizons and learn about your place within a unified global community of vibrant and adaptive cultures.
But here are a few potential scenarios you may need to consider as well as advice on how to handle them if they occur.

You may experience passport privilege

Being Black and owning a passport from the ‘west’ can result in better treatment abroad than it does for Black nationals from Africa and the Caribbean. Jessica Nabongo, the first Black woman to travel to every country in the world, discovered vast differences in how she was treated when travelling on her US and Ugandan passports. She says: "I’ve entered countries like Fiji and was treated better with my American passport. I make a point of travelling with my African documents so it might spark some change." Anti-Black sentiment is often more pertinent for Black travellers from Africa than it is for Black Brits or African Americans due to the perceived power of our national identities abroad - a privilege associated with our passports. But many of our own countries are so racially polarized that it takes being abroad to really feel this privilege as a Black traveller. Annette Richmond, founder of Fat Girls Traveling, explains: "In Mexico, I’m an American but in America, I’m just a Black person. If something happened to me in Mexico, there would be noise - the embassy would get involved - but at home I’m just part of a system. I only have American passport privileges when I leave America." Be aware of this as you travel and always keep your passport privilege in perspective.
Advertisement

Search for stories from those who look like you in order to gain insight into Black experiences abroad. Seek accounts from travellers and those from the local community. Consider the residency status of the content you find because visiting for a week is totally different from living somewhere and attempting to integrate. Should one account of racism toward someone on a weeklong visit put you off from visiting an entire nation? I don’t think so. Of course, in times of increased violence against Black bodies, it is natural to feel hesitant about venturing to a new country, but the world is wide and exciting! And after travelling extensively, I believe most people within it are good, so don’t let fear stop you from fulfilling your travel story.

Black women aren’t a monolith, and each of us will find vastly different experiences abroad based on where we are in the world and the many complex ways our Blackness intersects with other facets of our identity. If you belong to other minority groups, such as plus size, LGBTQ+ or Indigenous or you are not able-bodied, you may find more hyper-surveillance in places where you stand out.
Annette Richmond believes it is her size, not her race, that results in more attention abroad. She says: "A lot of aggression because of my race happens in America where I’m from, but when it comes to my size, that is a bigger deal abroad. They are much more focused on this in Asia. Kids will point and stare, and people will laugh." To feel more confident before you travel, search for stories of those who look like you abroad.
Advertisement

You may get mistaken for a local

When travelling in a majority-Black country, you’ll likely pass as a local which can give you a fascinating insight into the intricacies and inner workings of diasporic communities around the world. Embrace it. Passing as a local can result in greater invisibility than your white counterparts which brings about benefits. Moving through spaces undetected can result in less hassle in public, the ability to capture better photos and content as a journalist as well as the opportunity to build better bonds with locals. This was my experience in Cuba where I often used the local currency to get around. But I also realized passing as a local removes the visible layer of protection that comes with being a ‘western’ tourist. You’ll be privy to how locals are treated and receive a lower levels of service in bars and restaurants, or even be refused entry to entertainment venues - as I was in Havana after being mistaken for a prostitute.
Be grateful for the insight you can obtain into both worlds as a local and traveller - your experiences and cultural understanding will be far richer because of it.

You may get harrassed

Let’s fast-forward to islands. Your skin is gold (no spray tan), your co-ord is coordinated and the braids are fresh. That is enough of a reason for others to want to snap a photo of you, but it may also be related to the face you are the only visible minority around. This happened to me a lot in Vietnam and I learned that random photos make me uncomfortable so adopting clear hand signals (luckily ‘no’ is pretty much the same in every language!) helped put a stop to it. And although all women are victims of unwanted sexual harassment, for Black women this can sometimes also take on a racialized tone. If you are being made to feel like a racial spectacle abroad, head somewhere safe, crowded and touristy, such as a café or restaurant where you can rest, call a friend, plan the next part of your trip or chill. And remember: one bad experience does not characterize a whole country.
Black Girls Take World by Georgina Lawton is out now. 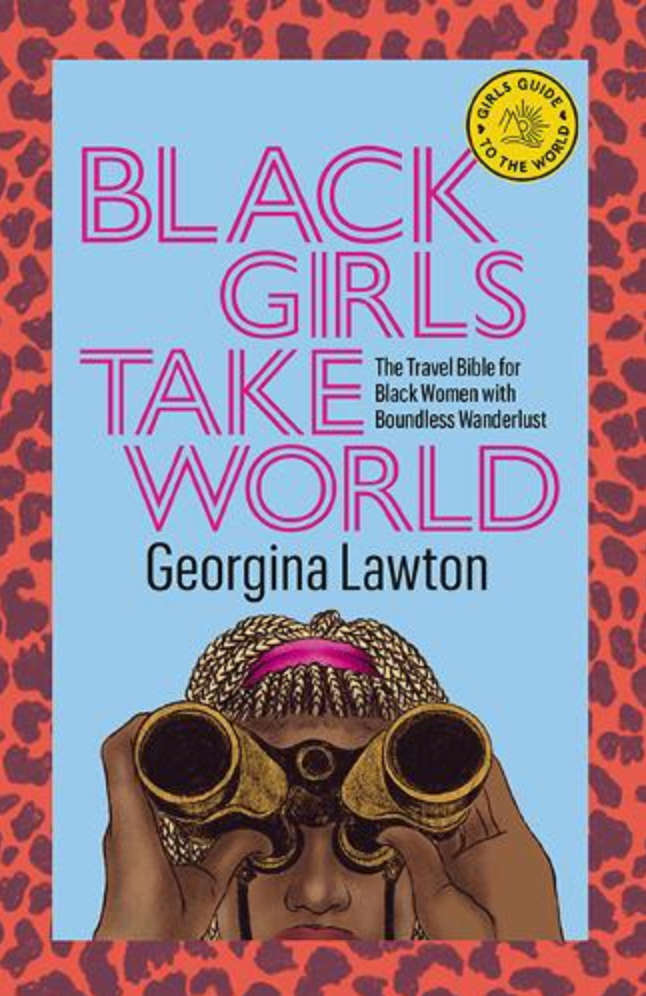 Hardie Grant
Black Girls Take World By Georgina Lawton
C$24.99
Indigo
Black Friday
Away’s Black Friday Sale Just Dropped — & It’s Alread...
If you’re looking to upgrade your luggage, now is the time to act. R29 reader and editor fave luggage and travel accessories brand Away just launched
by Mercedes Viera
Living
What A Travel Journalist Wants You To Know Before You Book Your N...
An ice-cold cocktail under a palm tree on a Caribbean beach was always a good idea. But after 18 months without travel, it’s now what dreams are made of.
by Jennifer Weatherh...
Coronavirus
Canada Has New Vaccine Rules For Flying
UPDATE: On August 13, Transport Minister Omar Alghabra announced that all commercial air travellers in Canada will be required to be vaccinated (alongside
by Danielle Campoamor
Advertisement
Living
5 Things You Need To Know Before Travelling The World As A Black ...
The following is an extract from Black Girls Take World: The Travel Bible for Black Women with Boundless Wanderlust by Georgina Lawton Restriction of movem
by Georgina Lawton
Living
How Olivia Rodrigo Became A Pop Icon For Geriatric Millennials
I got my driver’s license in 2001. Olivia Rodrigo got hers during this pandemic. Despite our age difference, I am one of many “geriatric millennials”
by Natalie Gontcharova
Living
Travel Influencers Used To Have The Dream Job. Where Will They Go...
When the pandemic hit last spring, popular travel and food YouTuber Mark Wiens was relatively lucky: He had recently returned home to Thailand, narrowly av
by Angela Lashbrook
Wellness
After A Year Of Staying Close To Home, Travel Has Become An Emoti...
When Jennie Larson finally became eligible to receive the COVID-19 vaccine, she jumped into action and added three big events to her calendar: Her two vacc
by Olivia Harrison
Living
The Most Wish-Listed Canadian Airbnbs To Put On Your Travel Bucke...
by Truc Nguyen
News
Here’s Why Airbnb Cancelled The Reservation Of A Customer A...
Airbnb is not here for hate groups. The home-sharing platform proved that this week by cancelling the reservation of a customer who used Airbnb to rent a p
by Olivia Harrison
Dedicated Feature
Creative Director Dani Roche Finds Fresh Perspective on a Road Tr...
In mid-September, on one of the precious last few days of summer, Dani Roche buckled her chow chow Suki in the back seat of the new Lincoln Corsair and set
by Lucy Cameron
Living
The Predictability Of Leaf Peeping Makes It The Ultimate Fall 202...
As a Libra, I have always enjoyed fall, but I’ve certainly never considered myself a die-hard fan of the season — you know, the type of person who
by Olivia Harrison
Living
Inside Casa Loma, The Toronto Mansion Where The Schitt’...
With Schitt’s Creek sweeping the 2020 Emmys, we’ve been seeing a lot of the beautiful event at which the show’s cast and crew gathered to
by Olivia Harrison
Advertisement