Skip navigation!
Photo: Courtesy of Aurate.
Kerry Washington is one of Hollywood’s most revered multi-hyphenates. She's an actress, director, philanthropist, and founder of her own production company, Simpson Street. The latest feather in her career cap is, quite literally, her shiniest one yet as an investor in the direct-to-consumer jewelry company Aurate. Washington also collaborates with Aurate founders Bouchra Ezzahraoui and Sophie Kahn on the design side of things, so it's fitting that her latest collection (just in time for the holidays!) is an ode to, among others, one of the greatest multi-hyphenates of them all: Josephine Baker, actress, producer, singer, dancer, Francophile… and then some.

“Josephine Baker was a huge inspiration for me, especially when I think of the '20s and that Parisian Jazz age,” Washington tells Refinery29, adding that she even named her puppy, who sadly passed earlier this year, for the Black performer. Baker left a beautiful, indelible mark on the world of entertainment from which Washington herself hails, and that mark is visible in the Aurate x Kerry holiday capsule, aptly named Be The Lead, launching today. The timeless glamour of Baker and other “classic leading ladies of Hollywood” as Washington describes them, is the not-so-secret ingredient to her new Aurate collaboration. But make no mistake, you don’t need to be a celebrity, or a woman, to wear it.

“Jewelry is open to all genders... We all deserve to be the lead at the centre of the story of our lives, that’s also one of the reasons why ‘Be The Lead’ felt like a more active and inviting name for a collection. The important thing about leadership is that it’s yours, and that you can step into being the lead no matter who you are and no matter what you do.”
Advertisement
shop 5 products 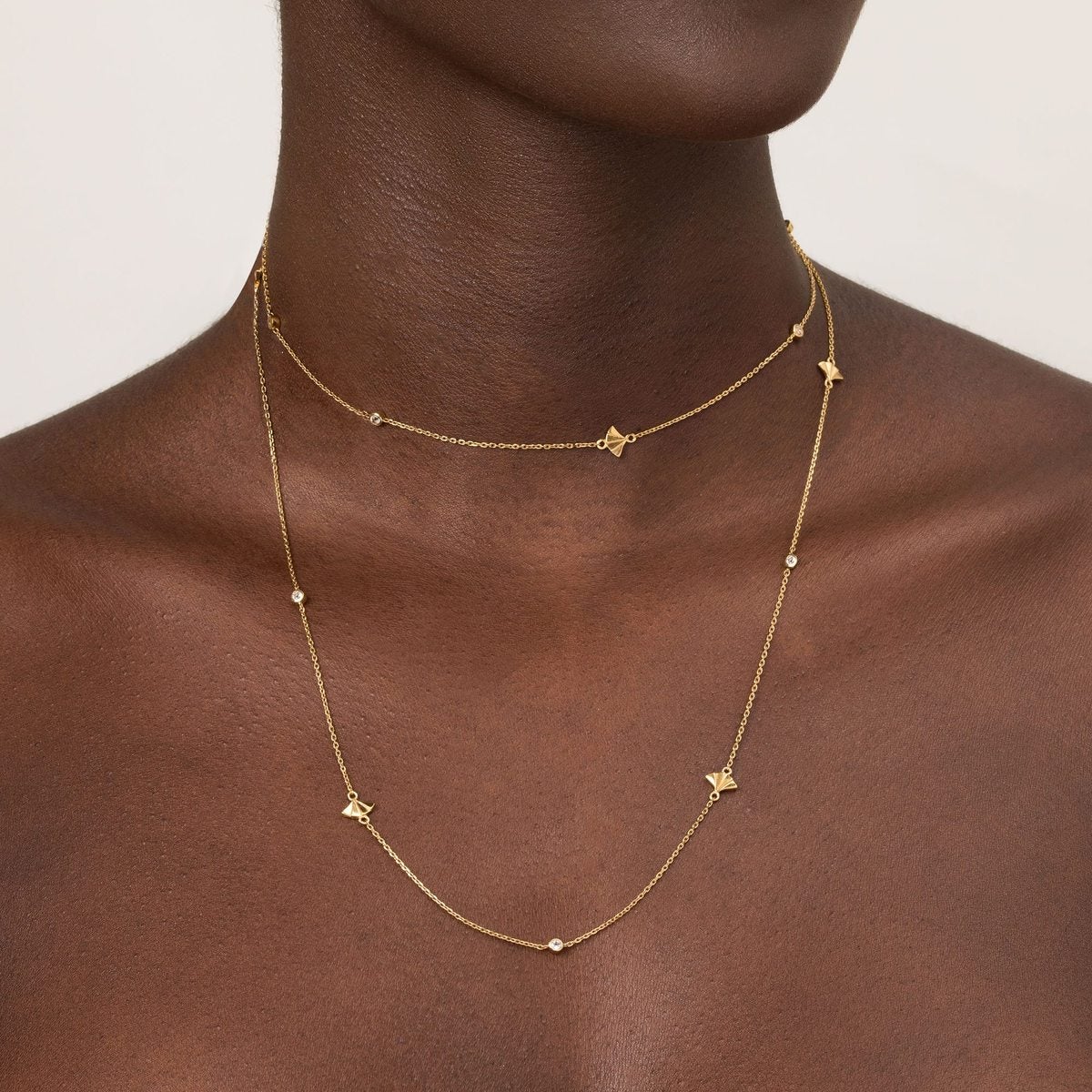 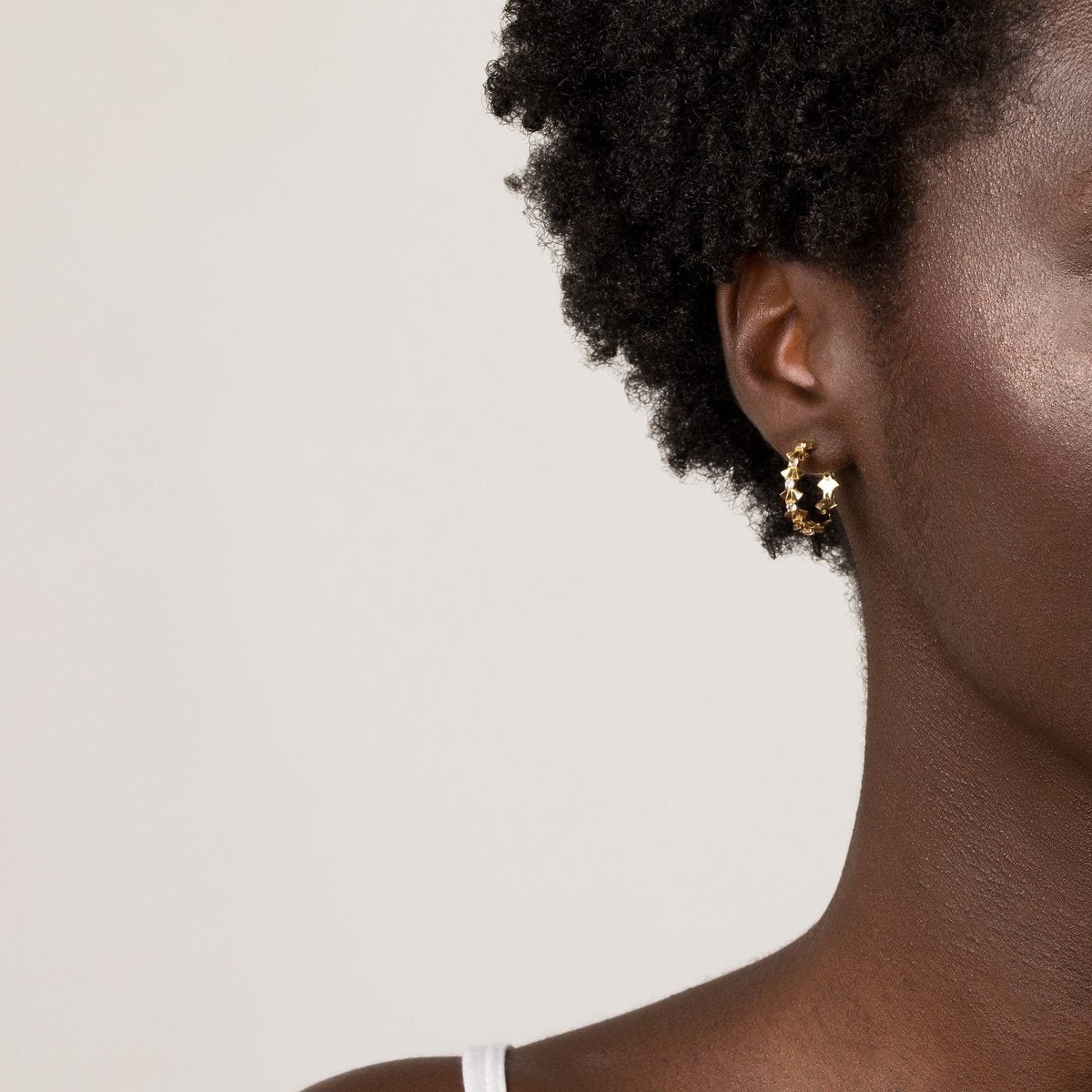 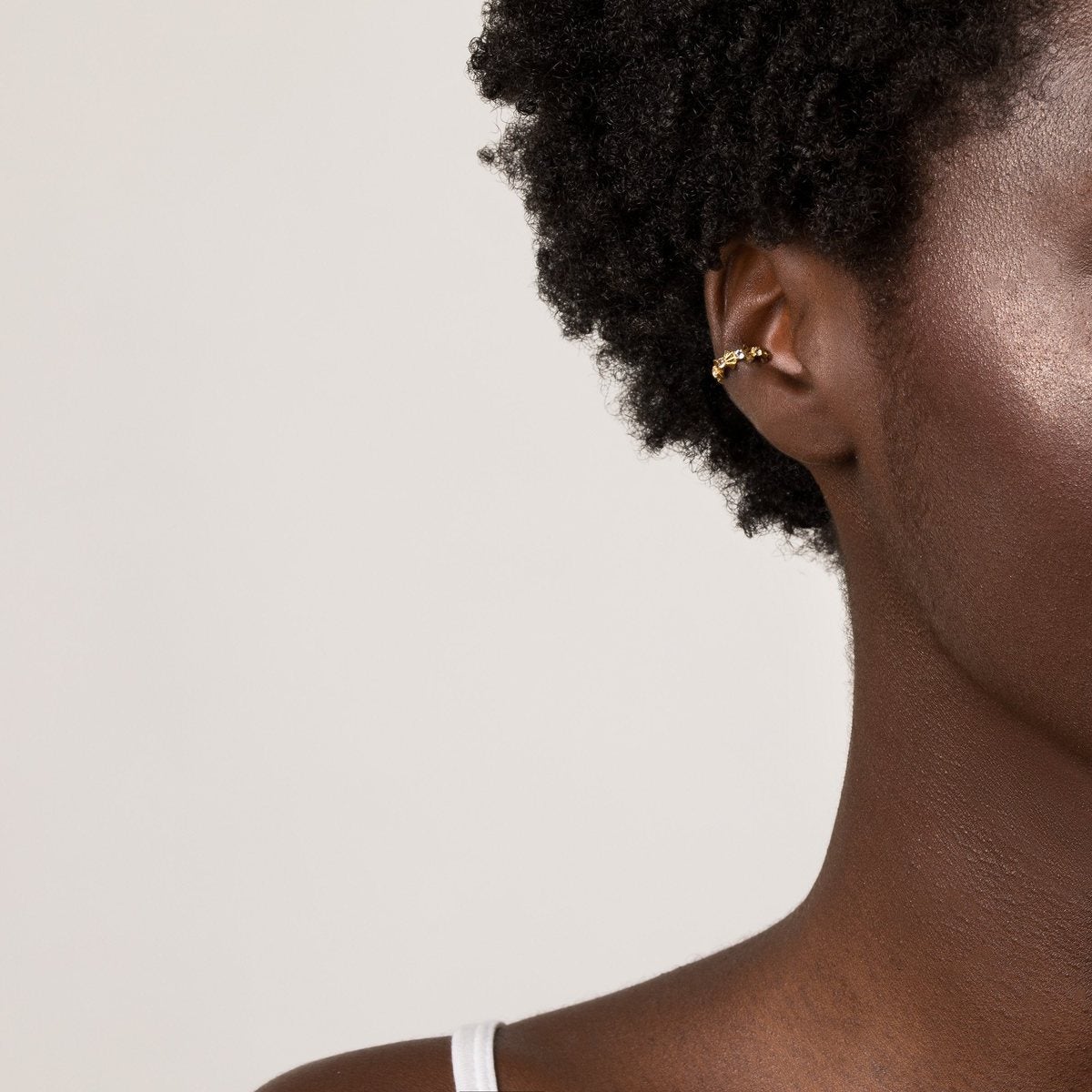 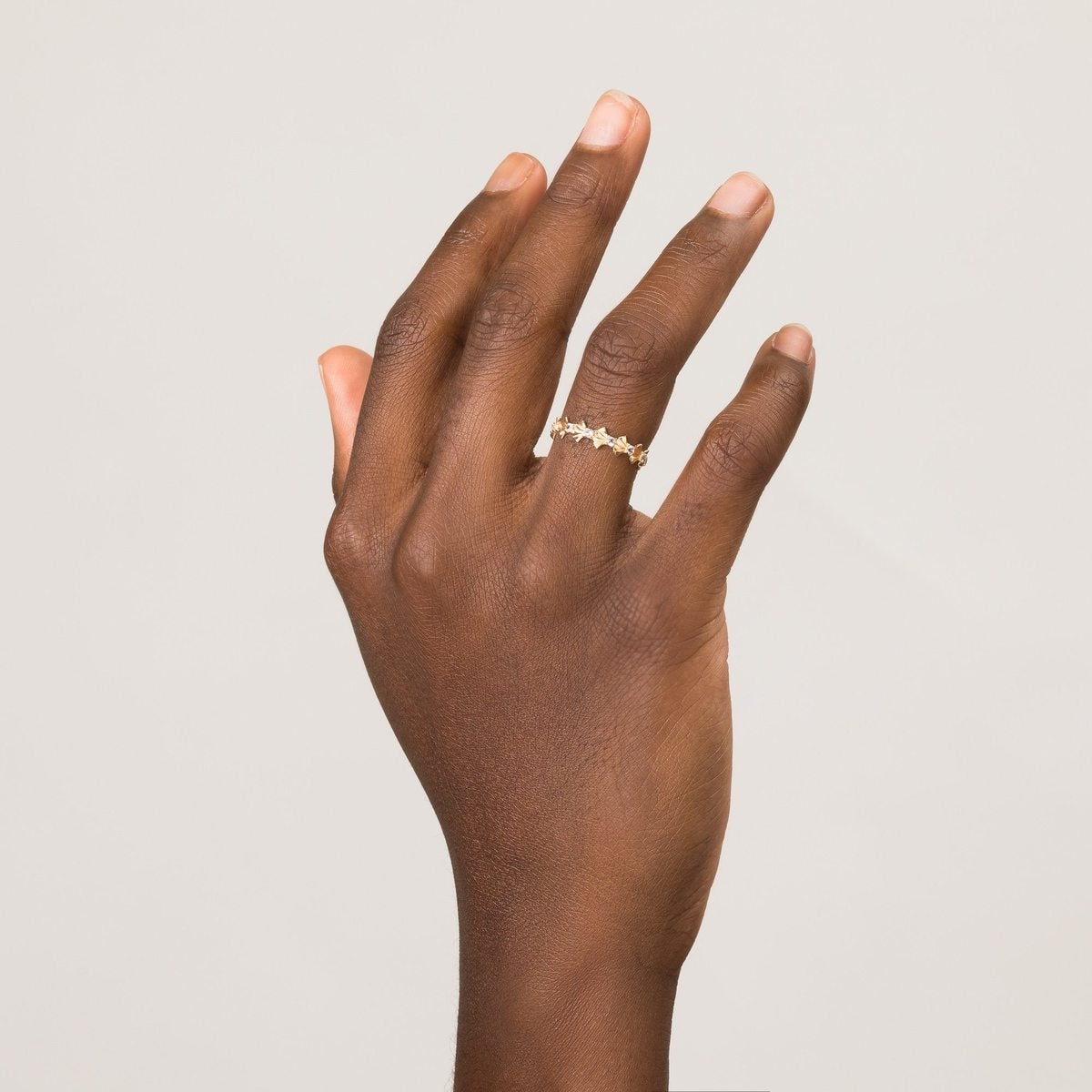 Aurate x Kerry
Lead Ring
C$370.00
Aurate
The five-piece collection features an ear cuff and hoops, a ring, and a wrap necklace (ideal for layering, Washington says), with prices ranging from $180 to $855. Each design infuses Aurate’s signature minimalist appeal with just a touch of that Old Hollywood, red carpet sparkle. Washington and Kahn also drew from the architectural backdrop of the Jazz Age era, which takes shape in art-deco elements of tiered geometry throughout the collection. Think the top of the Chrysler Building meets Zsa Zsa Gabor’s handheld fan — but for your neck (or your ears, or your finger).

“I grew up in New York City [which] really benefited from some of those arts programs that Roosevelt started in the '30s, so I love that aesthetic, I feel very close to it," Washington explains, referring to the Federal Art Project that was part of President Franklin D. Roosevelt's New Deal to create jobs during the Great Depression. This included employing thousands of painters, sculptors, muralists and graphic artists to use their craft to transform public spaces. Having gone from the Bronx to Beverly Hills, that spirit of accessibility resonated with Washington, who was initially drawn to Aurate's commitment to making fine jewelry available at a relatively lower price point than its competitors by cutting out the middleman. What's more, Ezzahraoui and Kahn centre sustainability in their approach to design by adhering to The Kimberly Process — a commitment to remove conflict diamonds from the global supply chain — and by operating with respect for the environment and local indigenous communities, acceptable working conditions, and fair pay.
“

Jewelry is open to all genders... We all deserve to be the lead at the centre of the story of our lives.

kerry washington
”
It’s a nostalgic yet contemporary collection in both aesthetics and in ethos, ultimately inviting wearers to step stylishly forward as the stars of their own lives. It can also point someone else to the star that lives within.

“I think [something from this collection] is a really wonderful gift to get for somebody that you think of as a leader, somebody who’s been an inspiration for you, or somebody who needs encouragement,” Washington shares. But no matter how you plan on celebrating the leading person in your life during the holiday season, Washington is here with a welcome reminder to us all that there’s no time to procrastinate on the gift hunt this year. “Dont wait! In general, everything I'm reading is saying the supply chain is going to be an issue. So don’t wait, get out and shop.”

At Refinery29, we’re here to help you navigate this overwhelming world of stuff. All of our market picks are independently selected and curated by the editorial team. If you buy something we link to on our site, Refinery29 may earn commission.
Most Wanted
The Best Of Lululemon’s Boxing Week Blowout — From Align Ti...
Here are two words you don’t see together every day: Lululemon sale. While Black Friday wasn’t so long ago, we’re still glad to see yet anoth
by Karina Hoshikawa
Holiday
Updated With Savings: 2021’s Best Adult Advent Calendars Fe...
by Nichole Jankowski
Fashion
Universal Standard’s $98 USD Cashmere Sweater Is The Perfec...
Fashion brand Universal Standard is back at it again, creating highly coveted, ultra size-inclusive closet staples that we cannot seem to get enough of. Th
by Chichi Offor
Advertisement
Black Friday
These Cyber Week Fashion Deals Are Still Live (And Waiting For You)
Hi, hello, and happy Cyber Monday. It’s just about that time of the year where the wreaths come out and the carols start. As always, we’re righ
by Emily Ruane
Black Friday
The Best Puffers, Parkas & Teddy Bear Jackets On Cyber Monday Sale
by Nichole Jankowski
Beauty
The Best Black Friday & Cyber Monday Deals In Canada
by Truc Nguyen
Black Friday
These Are The 9 Best Cyber Monday Deals For Plus-Size Clothes On ...
If you are like me, a little retail therapy or the possibility of scoring big on items from my clothing wish list sparks Marie Kondo-esque levels of joy. C
by Chichi Offor
Kim Kardashian West
An Internet-Breaking Skims’ Black Friday Sale’s Happe...
The Kardashian family has put their mark on everything from beauty brands to thriving tech companies — there aren’t many industries that have gone unt
by Chichi Offor
Black Friday
Lululemon’s Black Friday Specials Are The Best We’ve ...
When it comes to premium activewear with a legendary cult following, no brand compares to Lululemon. And, we should know — R29’s Shopping team is f
by Jinnie Lee
Deals
R29 Readers’ Favourite Vibrators Are Basically Free For Cyb...
There are sales, then there are sales. We’re talking about up to 75% off sitewide on reader favourite vibrators. Hurry over to Ella Paradis — a go-
by Mercedes Viera
Fitness
The Whole Outdoor Voices Squad Is Joining The Black Friday Fray
We’re feeling like winners today because activewear brand Outdoor Voices just launched its early-access Black Friday sale — and let’s just say t
by Emily Ruane
Shopping
R29’s U.S. Shopping Team Reviews Free People’s Previo...
Over the summer, we noticed an unassuming Free People FP Movement puffer that was selling out like hotcakes (we repeat, over the summer). The quilted nylon
by Jinnie Lee
Advertisement