Skip navigation!
Story from Beauty
It took the better part of a decade for me to finally put down the straightening iron. Then, about 10 months to resurrect my dark-brown 3B curls. So when I debated going fully blonde earlier this year, my closest girlfriends were convinced it would be my worst hair decision yet. But after years of admiring caramel-dipped looks from the likes of Solange, Zoë Kravitz, and Jasmine Sanders, I did my research and realized that blonde curls aren’t just for celebs (although yes, it does cost a pretty penny!).
Previously, I would’ve cringed at the mere mention of “bleach” and “curls” in the same sentence, but through this process I’ve learned that curly hair can be bleached without totally killing it. According to Nicole Kahlani, the colourist who transformed my hair (which was, full disclosure: done free via Bleach London, a hair colour brand and salon in London, UK, where I live), this is one of the biggest curly hair myths. Stemming from the notion that bleach destroys your hair, those of us with healthy curl patterns are led to believe that bleach will absolutely, categorically ruin them.
Advertisement
“People think Afro hair or certain curl patterns can't be bleached — actually, it lifts easier than [other kinds of] hair,” Kahlani says. “But it's because it lifts easier that there's more chance of damage.” She explains the mistake many people make is actually over-bleaching, causing curls to break. As long as your colourist uses a lower-volume peroxide, bleaches slowly, and you *fully* commit to an aftercare routine, your curl pattern really can stay intact.
Whether you’re thinking about getting in on the trend of the season or curious about what you can do with your hair, here’s everything you need to consider.

Do not try this at home

“Don't do it yourself,” Kahlani says. “Go to a salon that has a lot of clients with your hair type and [stylists] who can be really realistic about the outcome and how long it will take.” Textured hair requires more patience and expertise to adapt treatments accordingly. Kahlani used Plex Bleach on me, which is similar to a bleach/Olaplex mix, built with extra protection to repair hair bonds to increase health and strength, and made specifically for fine or curly hair.
One way to make sure you’re in the right hands is to book a free consultation with a stylist. They’ll examine your hair texture, do a strand test, and ensure it’s safe to bleach.

Make sure your hair can handle going blonde

Just like you can’t have a Drake album without multiple features, you can’t bleach textured hair without health and hydration. Bleach is one of the most intense chemicals you can apply to your hair. To better understand what exactly happens during the bleaching process, I reached out to Jennifer McCowan, a Saskatoon, Sask.-based trichologist. “When you're bleaching the hair, you're chemically changing the bonds in the hair — essentially, what you're doing is you're blowing them up,” says McCowan. “When the bleach goes in, it basically starts to just destroy the melanin, which is what colour is made of.”
Advertisement
In that process, the protective layers of your hair are stripped, leaving strands exposed to damage and more prone to drying out. But according to McCowan, you can minimize that post-bleach damage. “The safety of your curl begins in the mixing of the colour,” she says. “If the colour is not mixed properly, you're going to get an imbalanced pH level and that in itself will fry the cuticle outside of the hair.”
According to Toronto-based stylist Ghergis Hagos, all of the above is why the initial condition of a client’s hair is a major deciding factor for stylists carrying out consultations. “You have to make sure your hair is in good condition, especially when it comes to going from darker to blonde,” Hagos says. If my hair had been damaged from previous box dyes or relaxers for example, dyeing it could have meant it could literally break off.
My hair was virgin hair, so the initial lifting took only one session. For hair that’s been previously box-dyed, Kahlani recommends trimming as much of the dyed hair as possible. She also says to be open to the fact that you’re going to have a much warmer blonde to begin with. Previously treated hair can take a few more tries to get it to your preferred blonde because your stylist will need to lift the layers of colour from your hair.

My first session was seven hours long. And seven weeks after that, it took another five-hour session to get it to an icy white (and bleach my roots). Using a lower volume peroxide and slowing down the process is what helps protect your hair, says Kahlani. And because of this long, intense process, she suggests committing to blonde for at least a year.
Advertisement
What happens if you have a bad bleach job, you ask? “You’ll notice the broken bits coming in a couple weeks [afterwards] and you either destroy the curl or get breakage,” Kahlani says. “And it's hard to come back from that without having a really awkward stage.”

TLC is major here. After the stylist does their bit, it’s up to you to take care of your hair in between appointments. “You want to continue to hydrate your hair,” McCowan says. “Be a little heavier on the moisturizer post-colour to make sure your hair is absorbing it. There are lots of different products on the market for curly girls.”
Always go sulfate-free and look for ingredients like shea butter, aloe vera, coconut and hydrating oils like argan, avocado and almond. Limit washing to once a week, up your deep conditions, and invest in accessories like fabric hair ties, satin bonnets, scarves, and/or pillow cases to protect your hair from breakage. “Don't over blowdry, don't over style, and don't overwash. You basically want to do half or a third the amount of things you could do while it was virgin,” Kahlani says.
shop 4 products 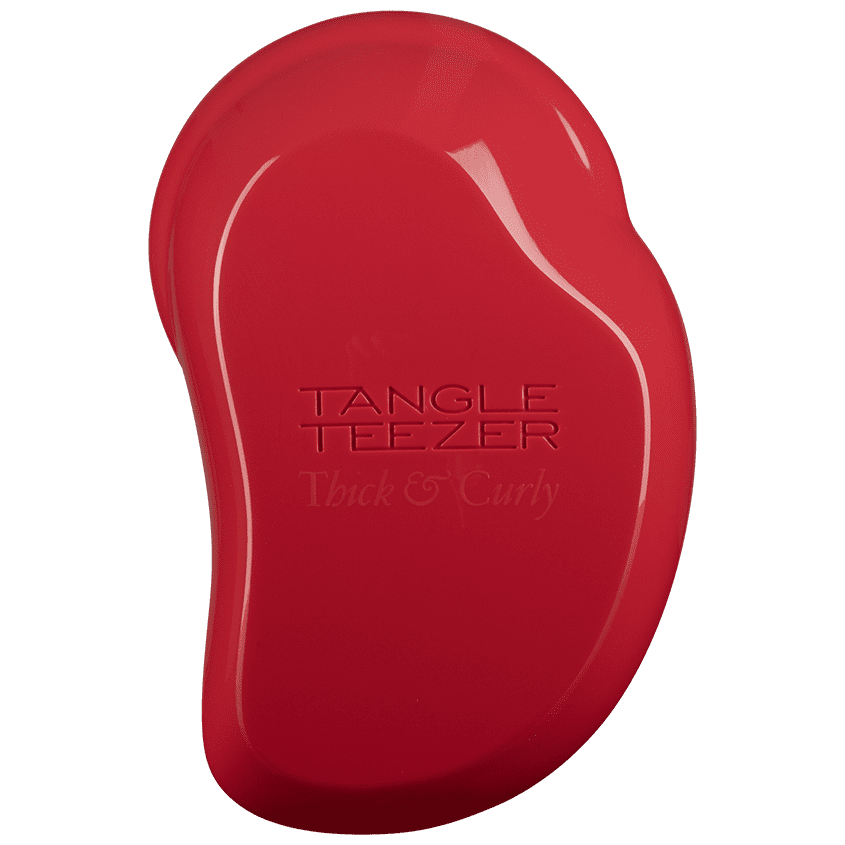 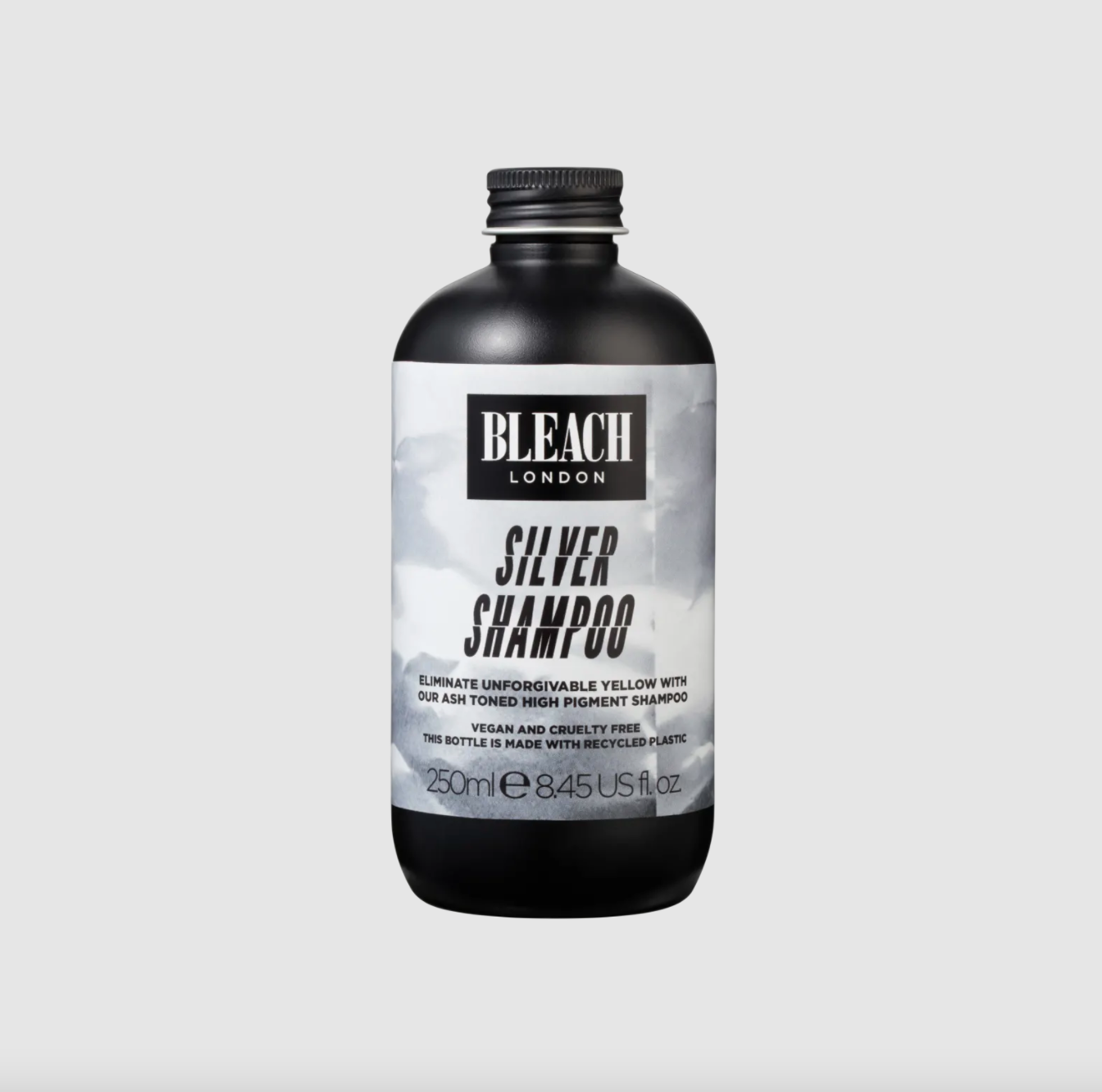 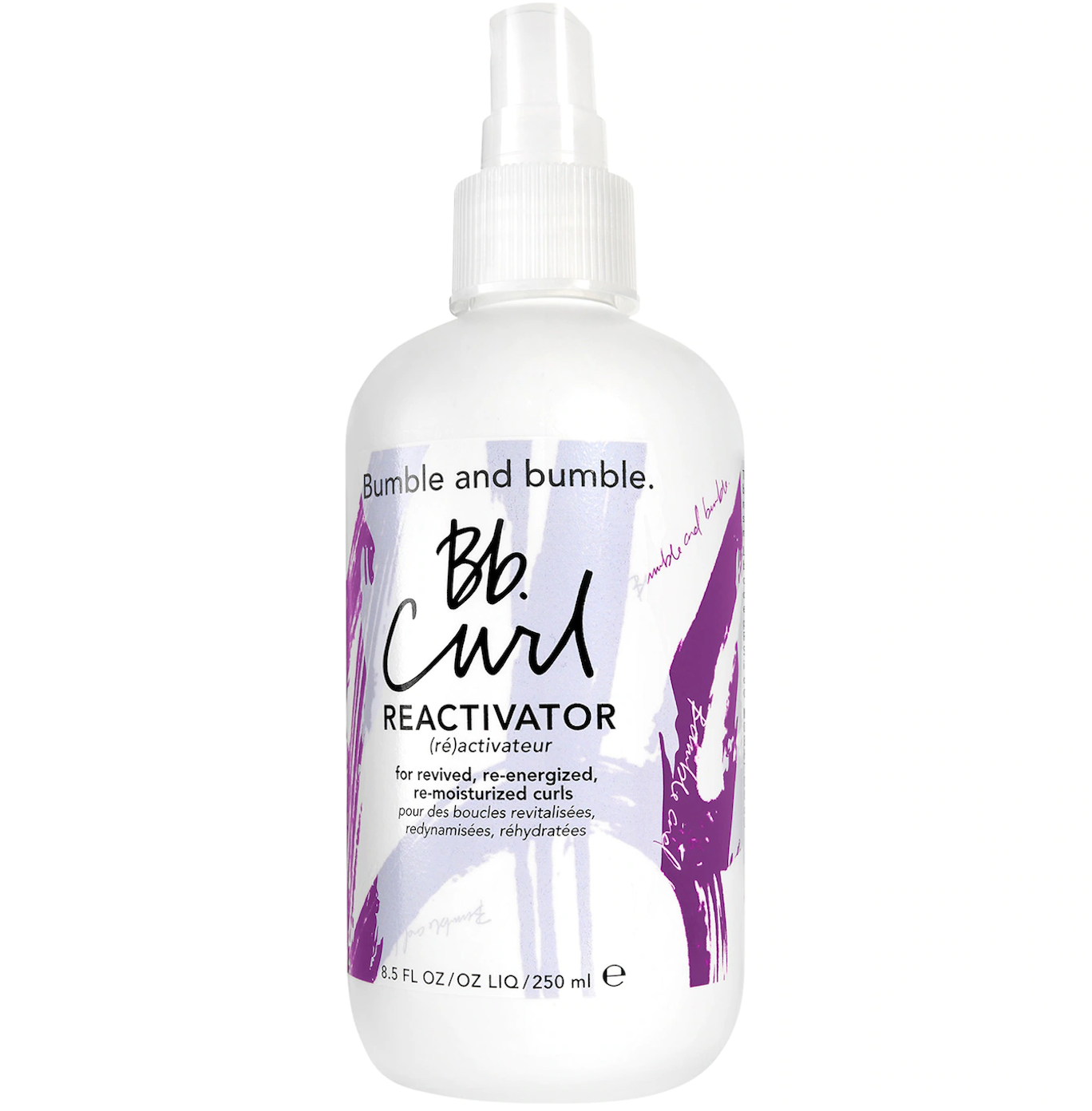 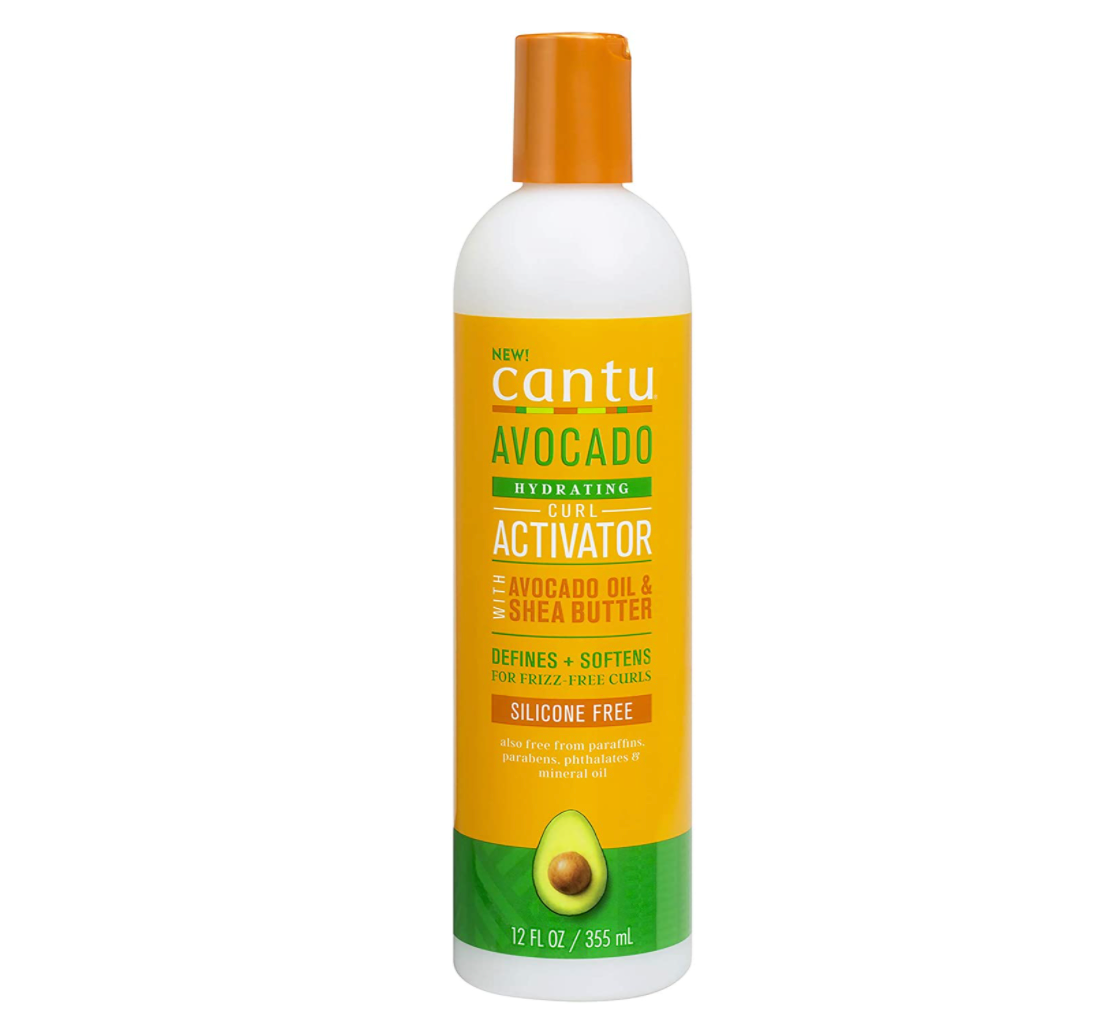 Cantu
Cantu Avocado Curl Activator
C$19.80
Amazon
At Refinery29, we’re here to help you navigate this overwhelming world of stuff. All of our market picks are independently selected and curated by the editorial team. If you buy something we link to on our site, Refinery29 may earn commission.
Beauty
‘French Glossing’ Overhauled My Dull Hair & I’m...
It’s fair to say that the French know a thing or two about achieving incredible hair. From blunt bangs (adored by celebrities like Jeanne Damas and V
by Jacqueline Kilikita
Beauty
We Hand-Picked The 4 Biggest Haircut Trends For Winter
by Megan Decker
Beauty
I Got The ‘Bixie’ Haircut That’s All Over Insta...
At the tender age of 14 I committed a cardinal beauty sin. Ignoring my hairstylist’s better judgement, I waltzed into Headmasters and demanded a pixie cu
by Claire Hubble
Advertisement
Beauty
Yes, You Can Bleach Your Curls Platinum & Keep Them Healthy — Her...
It took the better part of a decade for me to finally put down the straightening iron. Then, about 10 months to resurrect my dark-brown 3B curls. So when I
by Ebony-Renee Baker
Beauty
5 Trending Hair Colours To Inspire Your Winter Vibe
by Megan Decker
Beauty
It’s The Season Of The ‘Lop’ Haircut & You Can’t Tell...
If, like us, you feel the compulsion to cut your hair every time the season changes, it’s likely that this latest style has already landed on your mo
by Pema Bakshi
Beauty
“Expensive Brunette” Doesn’t Have To Cost A Thing
In a recent interview, Hailey Bieber told me that she doesn’t highlight her hair anymore. While she did dye her hair blonde prior to the pandemic, sh
by Megan Decker
Beauty
What To Ask Your Hairstylist Before You Get Curly Curtain Bangs
The time had finally come. After over two years without a haircut, my 3C/ 4A curls were in dire need of shaping. And when better than fall to make a major
by Nadia Ebrahim
Hair
From Half-Up To Y2K Straight: 5 Hairstyles Trending For November
by Megan Decker
Beauty
Florence Pugh’s Short Pixie Haircut Is Her Coolest Style Yet
Florence Pugh has been somewhat of a hair chameleon of late. First she chopped in a full fringe, then she swapped her signature blonde lengths for a smoky
by Jacqueline Kilikita
Beauty
13 Fresh Winter Haircut Trends By London’s Top Stylists
by Jacqueline Kilikita
Beauty
What’s A Good Blonde Highlight For Fall?
I’ve never highlighted my hair, but I’ve considered it more times than I care to admit to any hairdresser who has ever brushed through mine, as
by Megan Decker
Advertisement