Skip navigation!
Story from Beauty
At Refinery29 Australia, we’re here to help you navigate this overwhelming world of stuff. All of our picks are independently selected and curated by the editorial team, but we may earn commission or other compensation from the links on this page.
Much like a pesky ingrown hair (or a pesky ex), keratosis pilaris is difficult to get rid of. I would know, seeing as I've tried just about every KP product under the sun in an effort to treat the textured bumps on my upper arms. Well, all except for one: The Ordinary's glycolic acid toner — an under-$15 solution that caught my eye after my dermatologist, Dr Dendy Engelman, MD, recommended an AHA product to help treat my KP.
Advertisement
Because of my olive complexion, one major concern was the hyperpigmentation that accompanies my KP bumps. (Even my fairer-skinned twin sister, who also suffers from KP, deals with dry reddish bumps that are often mistaken for a rash.) "KP is caused by the retention of excess keratin that builds up inside hair follicles and forms rough hard plugs. How that looks and feels varies from person to person given their complexion and the severity of the condition," Dr Engelman explained. And that's where the glycolic acid comes into play: "My favourite products for keratosis pilaris involve keratolytics — ingredients that can break up that excess keratin build up — such as alpha-hydroxy acids, like lactic acid and glycolic acid, and beta hydroxy acids like salicylic acid," Dr Engelman shared. So, after digging deep into Reddit threads heralding The Ordinary's glycolic toner's benefits, it was game time. 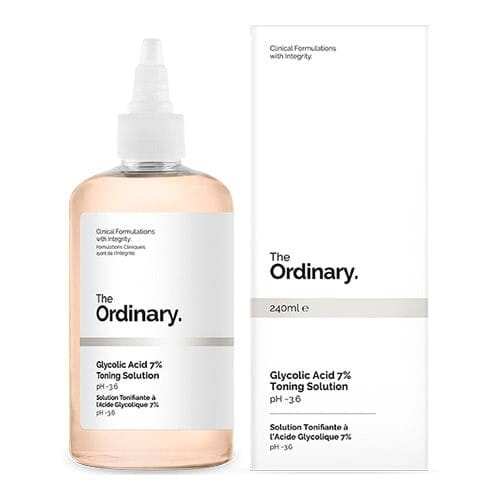 When my bottle arrived, I was surprised to see how large it was: 240ml! I took a shower, towelled off, dispensed a few drops onto my palms (I find that cotton pads tend to absorb product, and I fully intended on employing every last drop), and then applied the solution directly to my arms. My skin drank it up with no sticky residue or lingering tingle sensations left behind — it felt, surprisingly, like nothing.

After applying the toner to my arms every other night for a week, I was shocked to see and feel my skin: it was touchably smoother and looked so much more even. "Glycolic acid is the smallest acid in size, meaning the molecule is the most effective in penetrating the dermis to weaken cell bonds deep within the skin," Dr Engelman explained. "In your case, you may have needed a stronger acid, like glycolic [instead of lactic acid], to see major results." Bingo.
Advertisement
Photo: Courtesy of Karina Hoshikawa.
Before (Left) u0026 After (Right)