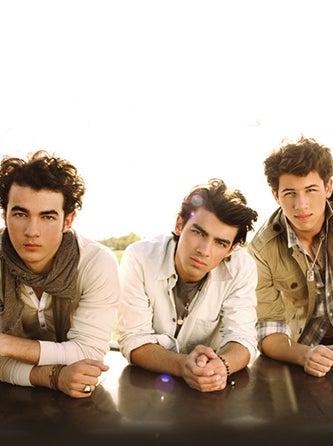 Photo: Courtesy of Columbia Records.
The end of the brothers Jonas is nigh. After canceling their 19-date tour last week, they've decided to get rid of their group's official Twitter account, too.

"There is a deep rift within the band," the brothers' spokesperson told
Us Weekly. "There was a big disagreement over their music direction." Nick, Kevin, and Joe previously went on hiatus between 2010-2012 to pursue their own interests. Nick went on to musical theater, Kevin and his wife scored a TV show, and Joe dabbled in a solo career. They did, however, reunite for an international tour and had plans for a new album — "had" being the operative word, here. The nails in the proverbial Jonas Brothers coffin are all laid, all that's needed is an official statement to hammer them in. (Us Weekly)

Entertainment
Why Teen TV Shows Are So Good At Dealing With Death
Content warning: This piece contains references to suicide and death. It all started with a tennis racket. Just minutes before making out with her hunky ne
by Katherine Singh
Unbothered
India Shawn Is Proof R&B Is Far From Dead
For lovers of R&B, singer-songwriter India Shawn’s debut album BEFORE WE GO (DEEPER) is a breath of fresh air and a welcome return to the roots of th
by Christa Eduafo
Pop Culture
Is It Ever Okay For Straight Actors To Play Queer Roles?
There is a question that’s been asked to death in recent years, as Hollywood reckons with the representation and diversity problems that have long plague
by Kayla Kumari Upad...
Advertisement
Unbothered
We Need To Talk About Chicken Shop Date
Over the past few years, I’ve seen criticism of Amelia Dimoldenberg and her hit show Chicken Shop Date fester under the surface like hot bubbling lava in
by Shaznay Martin
The Floor Is Yours
Why Disability TikToker Imani Barbarin Pushed Back On COVID Restr...
TikTok creator Imani Barbarin has made a name for herself as a witty and vocal advocate for the disabled community, and she won’t stop now even though CO
by Lexy White
Unbothered
Is Color-Blind Casting In Regency-Era Romances Really Pr...
For some, the rise in color-blind casting is a sign of progress and a welcome change. But for me, a world without racism for the sake of romance isn't fant
by Nylah Burton
TV & Netflix
S3 Of Never Have I Ever Explores What It’s Like To Have A ...
Spoilers ahead. To be fair, the relationship between Never Have I Ever heroine Devi Vishwakumar and new boyfriend Nirdesh (or Des, to his friends) was doom
by Katherine Singh
GG Good Game
VR Meditation Has Changed My Life IRL
Right now I’m suspended in the air, high above the ground, as if gripped in an invisible giant’s fist. Strangely I don’t feel scared at all. Leaves d
by Maybelle Morgan
Unbothered
Serena Williams’ Legacy Lives On In Black Girls Like Me
I wasn’t a big sports fan growing up. If someone were to ask me to name five athletes as a kid, my response  would have probably been, “Uhhh, Sere
by Wisdom Iheanyichukwu
Somos Latinx
Never Have I Ever Star Lee Rodriguez on Portraying Fabiola...
For Afro-Latines, seeing someone on screen who looks like you and also shares your cultural background is still rare. “When there’s not a lot of repres
by Priscilla Rodriguez
Somos Latinx
Cancelling Batgirl Isn’t Just Baffling — It’s A Crus...
When I heard the news in 2021 that Afro-Dominican actor Leslie Grace was cast as Batgirl in the Warner Bros. superhero film of the same name, I was ecstati
by Amanda Alcantara
GG Good Game
Sex In The Metaverse Is Coming — And So Can You
These days, talk of the metaverse is inescapable. We take work meetings and suck up to our bosses in a virtual boardroom, attend couture fashion shows alon
by Katherine Singh
Advertisement
Advertisement
Discover
R29 Stories & News
Watch
R29 Original Series & Films
Shop
R29's Most Wanted