Story from Washington, D.C.
Women have come a long way in the army (and everywhere else, too) over the past half century or so — from wives and well-wishers to bona fide soldiers. But there's still a major obstacle standing between the equal sex and total military participation: the combat ban. It's been a source of hot debate for a while, and now The New York Times reports that the Pentagon is officially lifting it.
Over 20,000 women have served in Iraq and Afghanistan alone, and of course, they've found themselves in combat on many occasions despite the 1994 ban. According to the NYT, this shift will open up hundreds of thousands of jobs in artillery, armor, infantry and other combat positions — not to mention put the paperwork in line with the reality of war. This is important not only in principle but also because a resume featuring time in combat is crucial to advancing in the military, and the ban effectively prevented women from rising in the ranks alongside their male peers. (The New York Times) 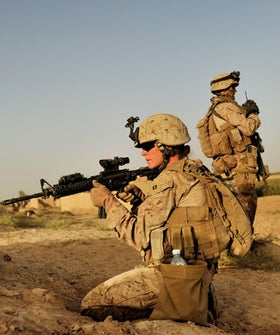 Image via The New York Times.

Work & Money
What $100 Will Get You In Each State
Folks, it might be time to consider relocating. The Bureau of Economic Analysis recently released a report measuring price disparities across different sta
by Jessica Chou
Washington DC
Your Guide To An Awesome Last-Minute Getaway Near D.C.
by Ayren Jackson-Can...
Entertainment News
Rihanna Rings In The United States Of Amerihca
by Hayden Manders
Entertainment News
Girl Hopes For Beyoncé, Gets Obama Instead
You can't always get what you want. But, if you try sometimes, you just might find — wait, we got off track. You can't always get what you
by Hayden Manders
Washington DC
How The Nerd Prom Has Become The Coolest Ticket In Town
On one special night of the year, the men and women in D.C. trade in their pocket protectors and ID lanyards for pocket squares and custom gowns to attend
by Laura Schwartz
Washington DC
8 Things To Know This AM — Apr 30 2014
In D.C., the White House has issued a list of recommendations to colleges about how they should handle and prevent sexual assault on campus. (The Washingto
by Hayden Manders
Washington DC
Glitz, Glamour, & Spring Arrive In D.C. With Our Hollywood-Inspir...
by Ashley Mateo
Washington DC
This News Presenter Shares Her On-Set Routine
How do you like to start your day? What news show do you like to kick it off with? We don’t play favorites. Instead we feature anchors we love, one being
by The New Potato
Washington DC
Party (& Shop) Like A Star In D.C. With R29 & CUSP
Photographed by Jesse Webster. Fashion, like Hollywood, is constantly evolving. As fast as labels and designers can churn out new styles, there are up-and-
by Ashley Mateo
Home
6 Up-And-Coming Artists To Start Collecting Now
by Kristin Guiter
Books & Art
R29 Book Club: Put A Bird On It
Photo: Courtesy of Little, Brown and Company. Thanks for joining us for this month's final book club discussion, where we're hashing over the las
by Holly E. Thomas
Books & Art
R29 Book Club: Boris & Theo’s Not-So-Excellent Adventure
Photo: Courtesy of Little, Brown and Company. Welcome back to the R29 Book Club! If this is your first time with us, we've just gotten through the mid
by Holly E. Thomas
Discover
R29 Stories & News
Watch
R29 Original Series & Films
Shop
R29's Most Wanted