Skip navigation!
Story from Beauty
Photo: Courtesy of Metro Goldwyn Mayer Pictures Inc.
Throughout the span of her 20-year career, Lady Gaga has been a vessel of countless visual transformations. She’s famous for the many awe-inducing looks she’s worn both onscreen and on the red carpet, from her campy yet meaningful sartorial statements (who can forget the meat dress?), to the characters she’s played in American Horror Story and A Star Is Born. But none of them have required a metamorphosis quite like her role in Ridley Scott’s House of Gucci.
In order to become Patrizia Reggiani, the ex-wife of Maurizio Gucci who was convicted of orchestrating his 1995 murder, the singer went to what some might consider extreme measures, like immersing herself so deeply into her character she disconnected with reality, experiencing “psychological difficulty at one point” as Gaga told British Vogue, and spoke in an Italian accent for nine months. “Even when we were off camera and having dinner, the accent never broke,” says Sarah Tanno, Gaga’s longtime makeup artist, who did her makeup for the film. “So that was incredible.”
Advertisement
Creating the look of Patrizia was also a massive undertaking, requiring an inventive collaboration between Gaga, Tanno, and Frederic Aspiras, her hairstylist for the film who, like Tanno, has worked with the singer for over a decade. In The House of Gucci: A Sensational Story of Murder, Madness, Glamour, and Greed, Sara Gay Forden’s 2001 book that the film is based upon, Patrizia’s style is described as “artificial and overdone,” detailing her heavy use of mascara, “false lashes,” and “teased hair.” Gaga made the decision not to read the book, which she said was “filled with opinions,” nor did she meet with Patrizia in order to avoid being influenced by her agenda, as she explained to the New York Times.
Unlike other real-life subjects of recent movies, such as Princess Diana and Tammy Faye Bakker, photos of Reggiani, known as “The Black Widow,” were limited. “In the early years of her life, there was really no documentation of her,” says Tanno. “You can't really find photos of young Patrizia anywhere, so we worked with Gaga to create who she was when she was younger and to kind of write that story.” Tanno and Aspiras had to find inspiration elsewhere, so the two watched old Italian films and studied vintage Italian fashion, using Italian celebrities like Sophia Loren and Gina Lollobrigida for reference. “Gina was someone that really struck home for us; the shape of her eye, the hairstyles. She was a big influence of younger Patrizia,” says Tanno.
Advertisement
Tanno and Aspiras had daily eight-hour Zoom meetings where they’d go through the script and map out each scene. By the time they got to Italy to meet with director Ridley Scott, costume designer Janty Yates, and Gaga, Aspiras had completed a “500-page index book” that mapped out the hair and makeup for each scene. “We would sit in the room with Gaga and Janty and go through every single dress, outfit, hairstyle, nail colour, every piece of jewelry, every lip colour,” says Aspiras. “I would have to write down every hair product for each scene to keep continuity, so that when Ridley shot the movie, there was natural progression in the film.” The result was Gaga wearing 54 different looks as Patrizia. (Yates told the New York Times that they didn’t repeat a single item for her costumes, not even an earring.)
Photo: Courtesy of Metro Goldwyn Mayer Pictures Inc.
Tanno and Aspiras dedicated a lot of time to studying the hair and the makeup styles from the 1970s, which is when Patrizia and Mauricio first meet in the film. One thing they noticed was that Italian beauty trends were a little bit behind the States. For example, according to Tanno, Italian women were still doing a ‘60s cat-eye in the mid-1970s, even though the style of makeup was no longer popular in the U.S. “Gina always had this beautiful, kind of straight cat-eye and sometimes she even did a second one where she would go underneath [the eye-line] really close and it would come out a little bit,” explains Tanno.
Advertisement
Because she, Aspiras, and Gaga have worked together on a great number of looks during the past 12 years, Tanno says that it was a challenge to make sure that the overall look felt like someone else and not at all like the singer, so she had to somewhat step out of a comfort zone. “For me, it was doing a cat-eye that was a different shape, that was more round and wasn't, you know, snatched. And instead of the really furry brow, I would round her brows so that she felt different,” she says. (Gaga is so convincing as Patrizia in the film, brilliantly portraying the character’s calculative persona with just her glances, and Tanno’s makeup perfectly frames her eyes.)
Tanno says they had to make Patrizia look “a little rough around the edges.” Even though she was glamorous, and had money and power, she couldn't come across so perfect that it was distracting. “It was just so important to Frederic and me that you're never staring at the hair and makeup, like, oh my god — it had to feel like real life and not like she had a hair and makeup person,” says Tanno. “That's also a challenge as a makeup artist; you're always wanting to perfect your makeup and make things perfect, but she was a real life human who doesn't have a glam team.” Aging Patrizia over the span of 30 years was another challenge. Unlike other movies where prosthetics are used to transform the actor into the real-life person they’re portraying, Tanno only depended on makeup. “We wanted to try and not use prosthetics," she says. "It was really about using the age technique in different placements and products in different areas to slowly age her in a way that didn't feel distracting.”
Advertisement

Using cosmetics in the same way that women during the era, such as taking an all-over rouge and using it as both blush and eyeshadow, was something that helped the makeup feel more authentic. “We wanted to be true to the way that they did makeup in those times, so I used a lot of gel kohl liner for the early '80s, because Patrizia had more of a smudged makeup look. I’d use gel kohl and smudge it in with a brush and into the crease so it looked real and a little bit messy, like she had been living in it all day,” says Tanno. However, it was difficult to find modern versions of certain cosmetics that they wanted to use, which is where Gaga’s own cosmetics brand, Haus Laboratories, came in. The recently released Casa Gaga makeup collection, which Gaga has described as “a love letter to Italy,” was used all throughout the film, and served as the missing piece to the vintage formulas they needed. “We did use all of the new collection, especially in those earlier time periods,” says Tanno. “The formulas were so specific so it was good that we developed it, especially the highlighter. If you look in the '70s and '80s, there was this fine glitter, almost like a glaze, that was hard to find in current products because everything has such a large, chunky pearl.”
Tanno used the Tutti Gel Powder Highlighter on Gaga to replicate the real-life Patrizia’s penchant for a “really strong golden highlighter” that went into the brow and on top of the lid. “We just wanted to use products that were of the time for the character, but it wasn't modeled after Patrizia in any way,” she says. The La Luce Lip Glaze, which comes in three shades named after Italian desserts, was a “modernized frosted lipstick,” according to Tanno. “In the movie, she wears a lot of frosted lip tones, so this was a really cool and interesting, modern way to do a frosted lip, by glazing it.” There’s also the Tanti Baci Extreme Creme Mini Lipstick Set, which includes five mini lipsticks that are each named after an Italian icon.
Advertisement 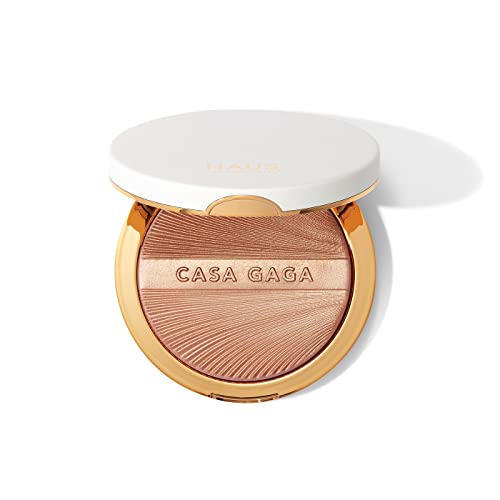 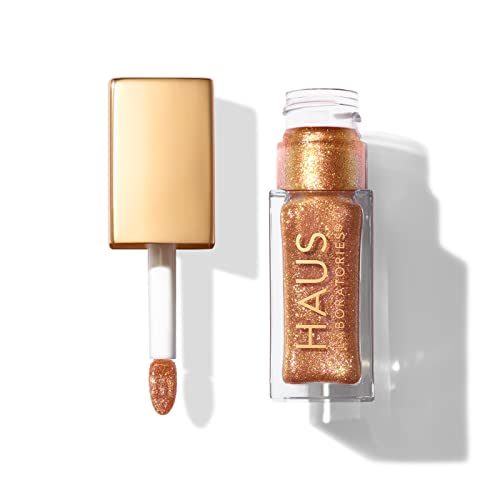 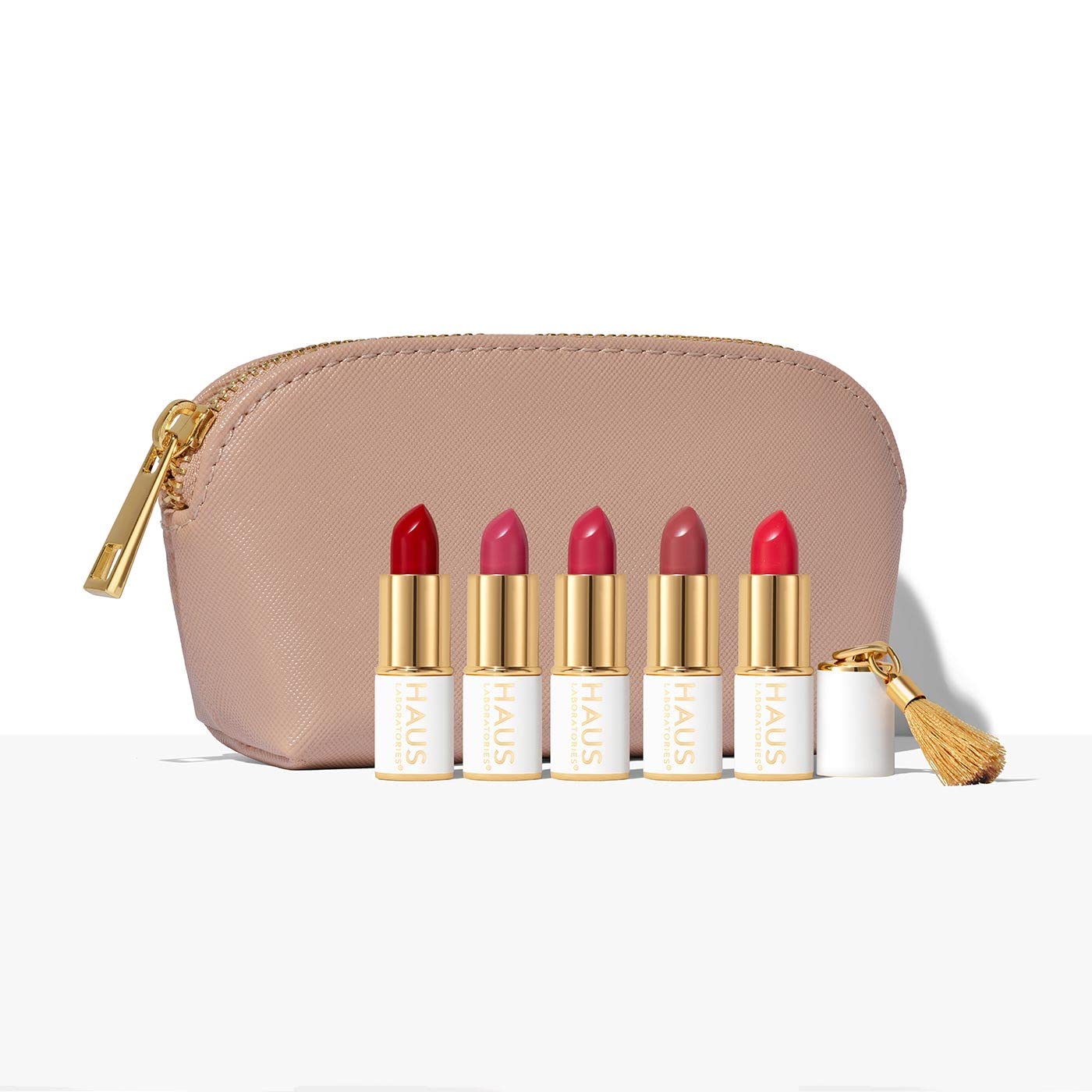 Haus Laboratories
Haus Laboratories By Lady Gaga: Tanti Baci...
$58.00
Haus Laboratories
“The two shades that stood out the most in these times were a really beautiful coral which we named after Sophia [Loren] because you would always think that she would be known for wearing a red lip, but if you look at past images of her, it really is a softer coral. So we use a lot of that during the movie,” says Tanno. “And then in a few scenes, it's the Gina [after Lollobrigida], which is a little bit like a punchier coral, because those were a lot of popular lip shades in Italy at that time.” For the scene where Patrizia, dressed as Elizabeth Taylor, meets Mauricio at a party, Gaga wore her namesake shade, Stefania, a vibrant red, which is one of the only times in the movie where she wears a crimson lip. “To me that felt really like an iconic part of the movie, so we wanted to include the red lip,” says Tanno. “And that's why it also was featured on the poster because it just felt so strong and powerful, which is what her character emulates.”
Photo: Courtesy of Metro Goldwyn Mayer Pictures Inc.