Skip navigation!
Photo: John Photography/Shutterstock.
Over the weekend, Olivia Wilde was seen leaving the Los Angeles home she previously shared with actor and ex-fiancé Jason Sudeikis. Alongside a pink crewneck from THC-infused beverage brand Cann, black skinny jeans, and a wide-brimmed hat, Wilde wore a pearl necklace from Éliou. Not only is the Miami-based jewelry brand beloved for its handmade designs, this exact necklace was featured in Harry Styles' “Golden” music video in November, thus adding fuel to the rumours that the Don’t Worry Darling co-stars are dating.
Advertisement
According to British Vogue, the $85 USD Senna necklace was designed mid-lockdown by co-founders Cristy Mantilla and Duda Teixeira. “We knew we wanted to design something happy — an uplifting piece that still felt casual and had a sense of nostalgia for better times,” the duo told the publication. It features small, freshwater pearls that are interspaced with blue and yellow Millefiori beads. In the “Golden” video, Styles showcases the necklace while running through the Italian countryside, wearing a mint-coloured blazer, plaid trousers, and a single lace glove.
Shop This 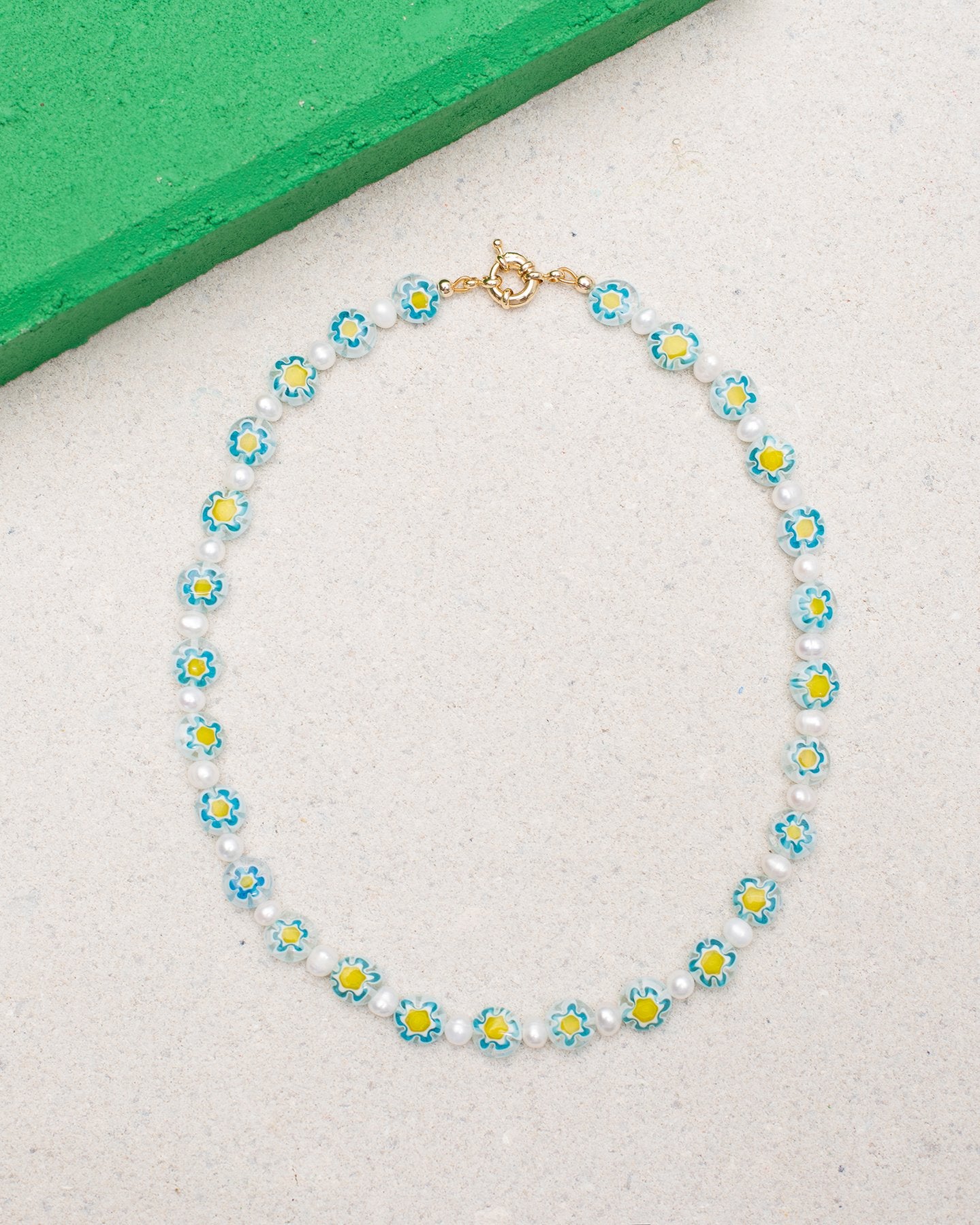 Éliou
Senna Necklace
$85.00
The Senna is just one of many Éliou pieces that Styles has worn this year. In September, the musician-actor was photographed at an airport in Naples, Italy, wearing the brand’s Thaia necklace, as well as a blue necklace that was custom-made by Mantilla and Teixeira for Styles’ stylist Harry Lambert. Shortly after the photos of Styles went viral, the duo added the latter necklace to the brand’s roster, calling it the Harry necklace. On Friday, the singer was spotted once again in Éliou, this time wearing gray sweatpants from the brand while out and about in Santa Barbara with Wilde.
“Both her and Harry [Styles] wearing our pieces were serendipitous moments that we did not expect or plan for," Mantilla tells Refinery29. "It's wildly flattering to see they're both just genuine fans of the brand.” The brand didn’t share whether or not Wilde (or her stylist) actually bought the necklace, which would help inquiring minds determine if she had borrowed it from Styles or was simply wearing a necklace that she herself owns.
Shop the style at Éliou.
At Refinery29, we’re here to help you navigate this overwhelming world of stuff. All of our market picks are independently selected and curated by the editorial team. If you buy something we link to on our site, Refinery29 may earn commission.
Style
Meena Harris’ Inauguration Night Dress Is Kate Middleton-Approved
From England’s first family to America’s second, one dress has crossed the ocean. Following the inauguration of President Joe Biden and Vice President
by Eliza Huber
Style
J.Lo’s All-White Inauguration Day Look Has Historical Significance
To ring in the next four years, Jennifer Lopez sang three — well, technically two and a quarter — songs at the inauguration of Joe Biden and Kamala Har
by Eliza Huber
Fashion
Lady Gaga’s Inauguration Look Is A Symbol Of Hope — & Reminiscent...
Ahead of her performance of the national anthem at Joe Biden’s inauguration, Lady Gaga tweeted that she will “sing to the hearts of all people who
by Irina Grechko
Fashion
Kamala Harris Wore Purple & Pearls Today — Here’s Why That Matters
Leading up to today’s inauguration, there has been a lot of speculation about what Vice President Kamala Harris would wear to the ceremony. As the first
by Irina Grechko
Style
Katie Holmes Channelled Her Dawson’s Creek Character...
On Monday, Dawson’s Creek star Katie Holmes was seen shopping in Manhattan wearing an outfit not unlike those worn by her character Joey Potter (and othe
by Eliza Huber
Style
Olivia Wilde Wore A Pearl Necklace From Harry Styles’ “Golden” Video
Over the weekend, Olivia Wilde was seen leaving the Los Angeles home she previously shared with actor and ex-fiancé Jason Sudeikis. Alongside a pink crewn
by Eliza Huber
Style
Sarah Jessica Parker Made Long Underwear Look Surprisingly Chic
On Tuesday, following the Sex and the City reboot announcement, Sarah Jessica Parker was spotted in her footwear brand SJP by Sarah Jessica Parker’s
by Eliza Huber
Style
9 Non-Traditional Celebrity Wedding Looks
by Eliza Huber
Style
J.Lo Wore The North Face Jacket On Everyone’s Winter Wishlist
Even during the pandemic Jennifer Lopez has maintained her impeccable sense of style. The 51-year-old’s sartorial genius was proven supreme on Monday, wh
by Eliza Huber
Fashion
Gigi Hadid’s $199 Plaid Coat Is On-Trend — & Still Available
Over the weekend, Gigi Hadid stepped out for a stroll around New York City’s Lower East Side neighborhood alongside her newborn daughter. For the occasio
by Eliza Huber
Style
Zendaya’s GQ Cover Story Will Convince You To Jump O...
On Monday, GQ announced Euphoria lead Zendaya as the star of its February cover. In addition to the cover story, titled “Welcome To Zollywood,” the 24-
by Eliza Huber
Fashion
Gwen Stefani Recreated Her Engagement Look — & Flashed Her Ring —...
To ring in the new year, Gwen Stefani released a music video for her single titled “Let Me Reintroduce Myself.” In it, she pays homage to her many care
by Eliza Huber