Skip navigation!
Story from Fashion
Is it just us, or is a new designer collaboration announced on the daily? What used to be a rare chance to buy affordable fashions from celebrated designers (think H&M and Karl Lagerfeld or Uniqlo and J.W. Anderson), has since become little more than a marketing ploy for brands and influencers alike. But while our expectations are admittedly low for today's fashion collaborations, one recent team-up is actually worth the hype.
Today, & Other Stories launches a 13-piece ready-to-wear collection in partnership with information designer, Giorgia Lupi. As an information designer, Lupi takes complicated data and statistics and transforms them into easily digestible and thought-provoking artwork. The curated & Other Stories collection features Giorgia Lupi's drawings either screen-printed or embroidered on each of the pieces.
Advertisement
Giorgia Lupi and & Other Stories was designed specifically to celebrate women in science and design — a cohort that rarely garners attention in media, let alone in fashion. "The general idea was to focus on stories about women that could be empowering and inspiring," Lupi told Refinery29. To bring that idea to life, she concentrated on three trailblazing women in science: Ada Lovelace, the mathematician; Rachel Carson, the conservationist; and Mae Jemison, the astronaut. Jemison's feature is particularly poignant as Christina Koch and Jessica Meir just completed the first-ever all-woman spacewalk last week and NASA announced that not only will the first women land on the moon in due time, the foremost person to walk on Mars is also likely to be female.
Photo Courtesy of u0026 Other Stories.
Shop This 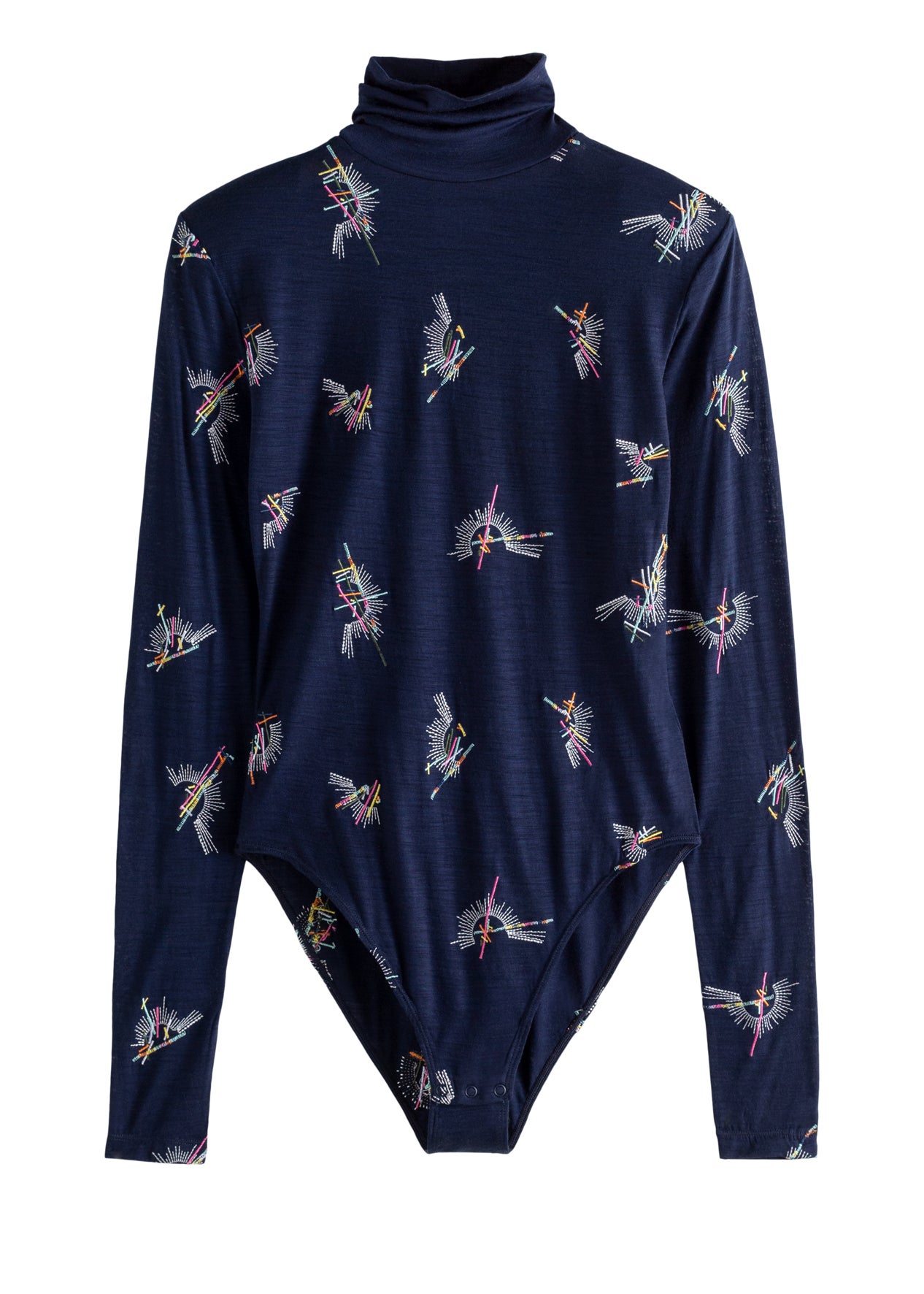 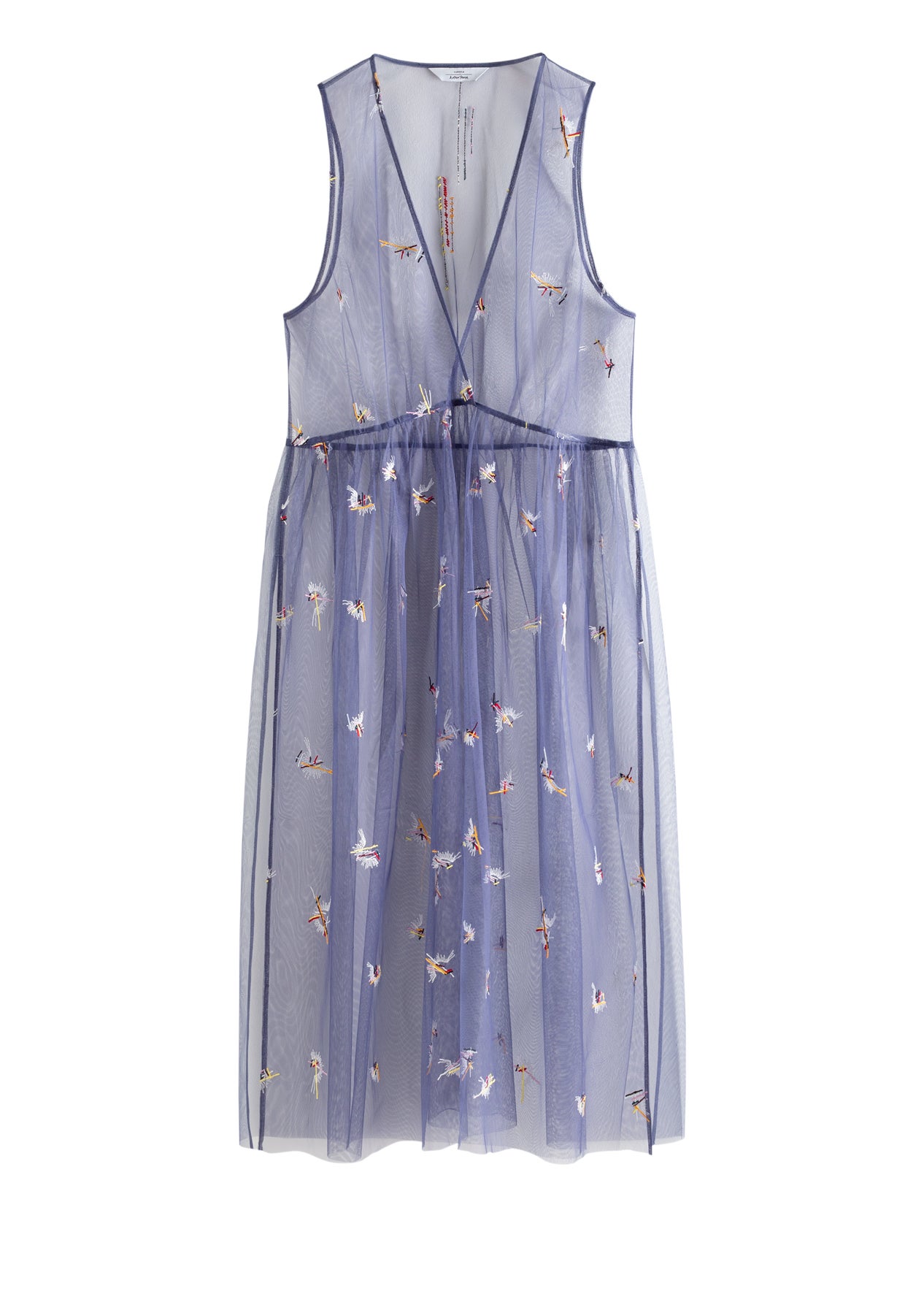 Giorgia Lupi x & Other Stories
Sheer Embroidered Tulle Midi Dress
$149.00
"We settled on these incredible women because they are three pioneers in previously male-dominated fields," Lupi explained. "I soon suggested we focus on their most significant accomplishments, and then as a background, to visualize information from their lives. The team at & Other Stories happily embraced this direction of the feminine component being present, but not the primary lens we use for these narratives."
"From there, we developed three primary patterns, one for each woman, that we then adapted to fit the items we had previously identified for the special collection, reinterpreting the patterns in different ways according to the type of garment or accessory." The result? A collaboration unlike any we've seen before. 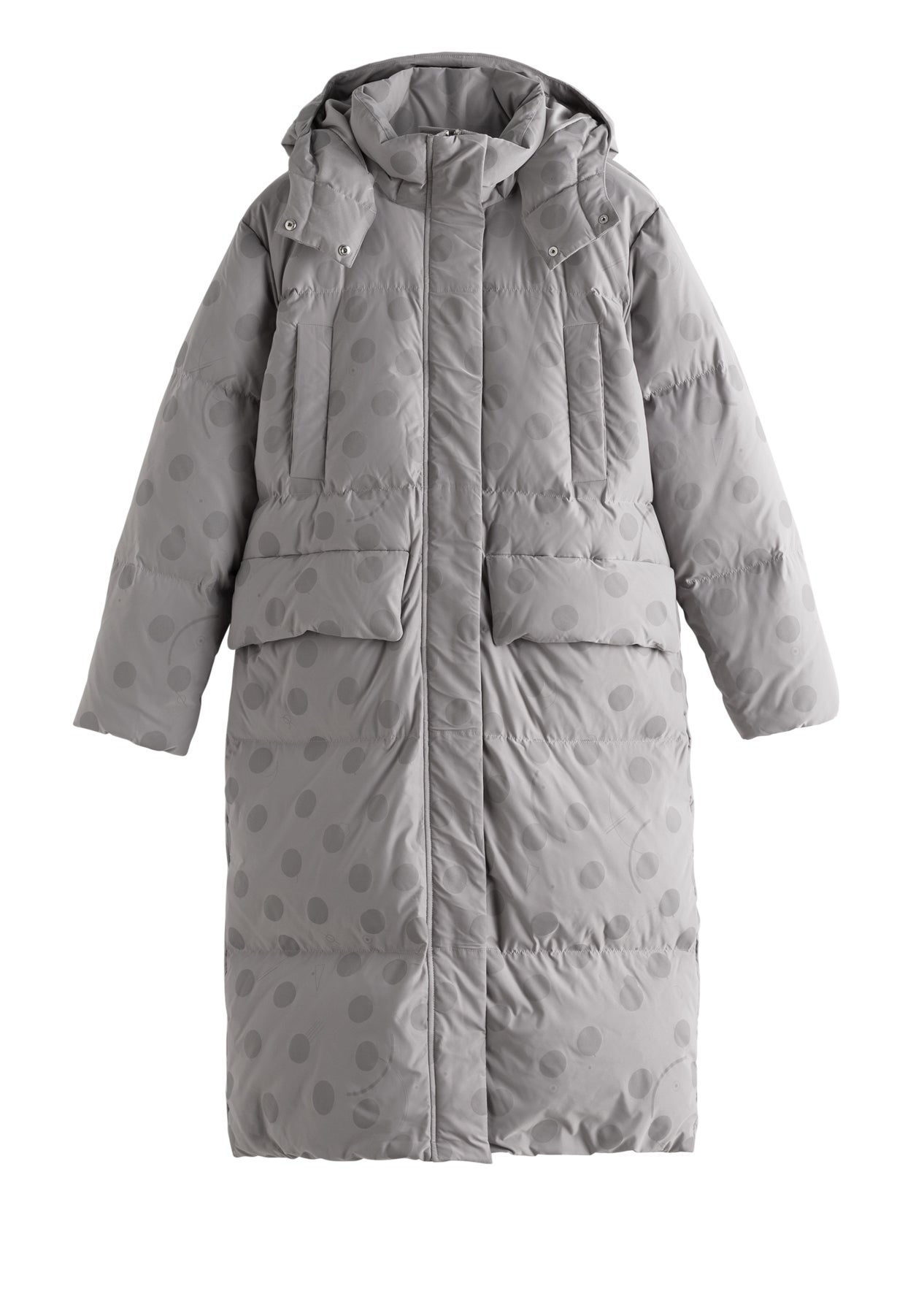 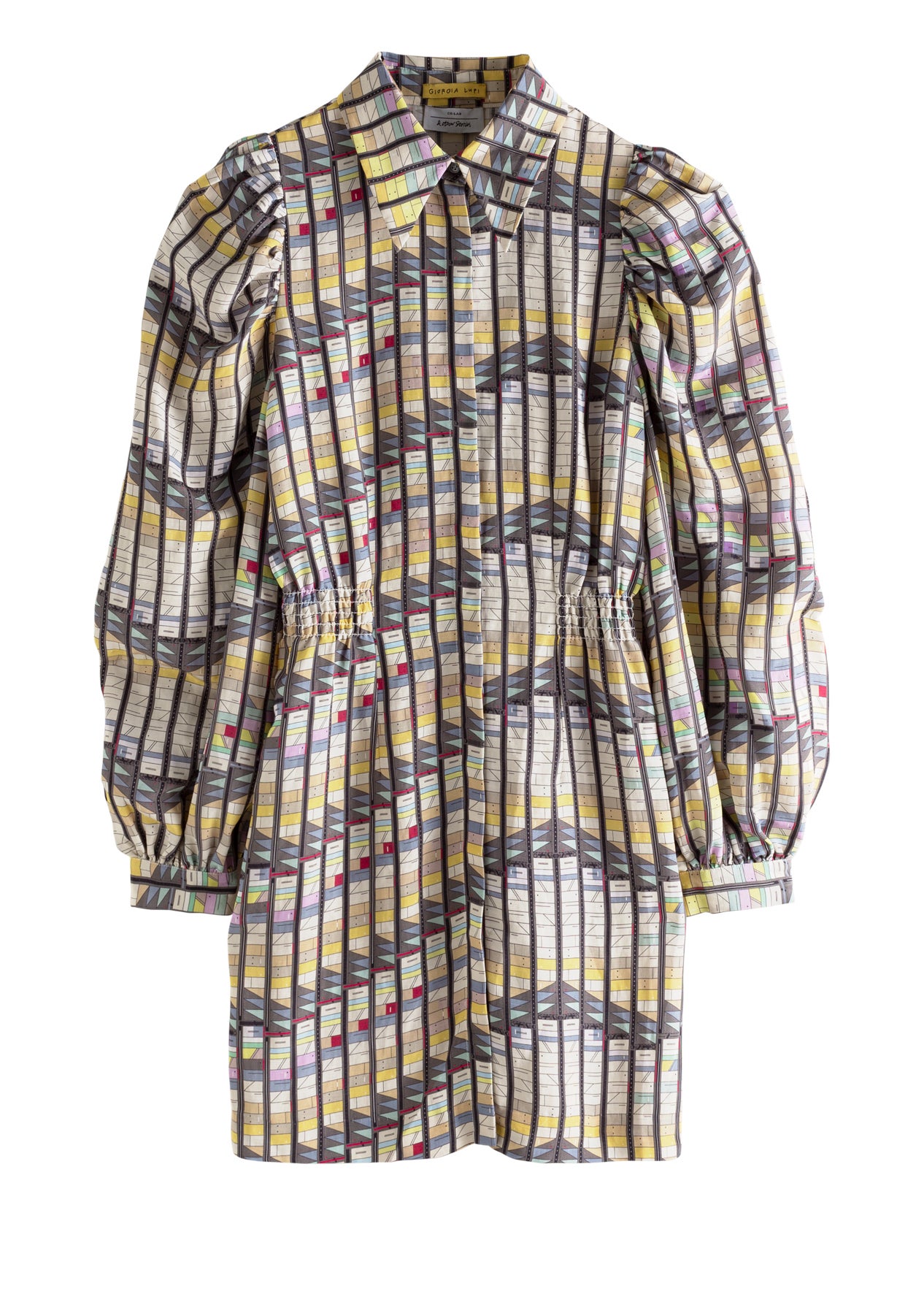 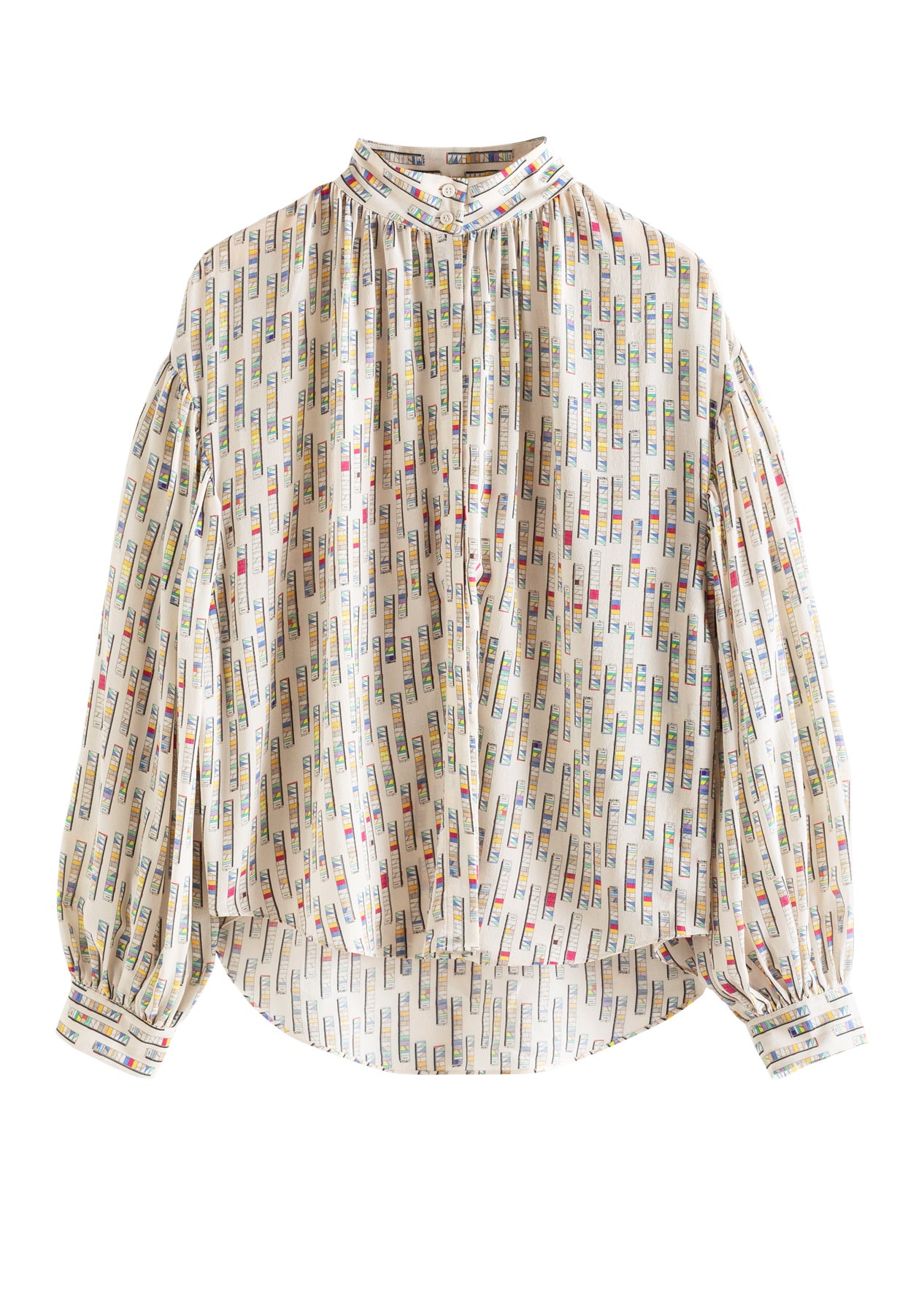 Giorgia Lupi x & Other Stories
Embroidered Wool Turtleneck Sweater
$129.00
Available both online (prices in USD) and IRL at the two-day exhibit at 97 Kenmare Street in Manhattan's Soho neighborhood, this collection is sure to be a hit among shoppers. So without further ado, check out the just-launched Giorgia Luci x & Other Stores co-lab.
Advertisement
Fashion
We Want Everything From Stine Goya’s Ballroom-Inspired Collection
Early 1990s queer ball culture in New York City was legendary, and continues to be relevant — so much so that one Copenhagen-based brand designed an enti
by Eliza Huber
Fashion
Jean-Paul Gaultier’s Final Couture Show Featured A Very Canadian ...
It was only a few days ago that legendary fashion designer Jean-Paul Gaultier announced his retirement from Paris couture fashion week, noting that his spr
by Sara Radin
Fashion
The Dad Sneaker Now Has a Split Toe, Thanks To Reebok & Maison Ma...
The dad sneaker appears to be one trend that’s not going anywhere, anytime soon. And now, it’s getting a major update — a split toe, all thanks to a
by Sara Radin
Fashion
Kaia Gerber’s Massive Givenchy Veil Is Destined To Be A Meme
It’s only a few weeks into 2020, and Kaia Gerber is already having an eventful year. Between brushing her teeth with her sunglasses on (can we talk about
by Sara Radin
Fashion
Prepare To See Jacquemus’ Latest Collection All Over Instagram
Simon Porte Jacquemus knows how to put on a show. His Spring 2020 presentation, set amongst a field of lavender flowers in the South of France, is proof of
by Eliza Huber
Fashion
Judy Chicago Designed Dior’s Runway To Look Like A Birth Canal
Ever since Maria Grazia Chiuri began her tenure as the creative director of Dior in 2016, she’s routinely used the runway as a platform to speak about wo
by Sara Radin
Fashion
Beyoncé’s Adidas x Ivy Park Collab Sparks Criticism From The Plus...
Following much excitement regarding Beyoncé’s Ivy Park collaboration with Adidas — it immediately sold out following its launch on Saturday, January 1
by Sara Radin
Fashion
Gap By Telfar Is The Most Perfect, Least Expected Pairing Of The ...
Gap — one of America’s most ubiquitous stores — and Telfar, one of its most provocative designers, have announced a partnership that is arguably the
by Sara Radin
Fashion
Louis Vuitton Just Acquired The World’s Second Largest Diamond
Calling all Uncut Gems fans: Louis Vuitton is now the proud owner of the world’s second-largest rough diamond of all time. First discovered in a Botswana
by Sara Radin
Fashion
Thanks To LOEWE, Megan Rapinoe’s Face Is All Over Paris
If you happen to be in (or heading to) Paris in the coming months, prepare for a very special welcome. Sure, you can check out the Eiffel Tower, the Louvre
by Eliza Huber
Fashion
Tan France & Alexa Chung’s New Fashion Competition Show Looks Ext...
Project Runway and The Great British Bake Off collide in the form of Netflix’s latest show, Next In Fashion, starring Queer Eye’s Tan France and model-
by Eliza Huber
Fashion
Carolina Herrera Is Now Selling Plus-Size Options On 11 Honoré
It might be Carolina Herrera’s 81st birthday today, but it’s not the Venezuelan designer who’s getting a gift — we are. This week, the designer lab
by Eliza Huber