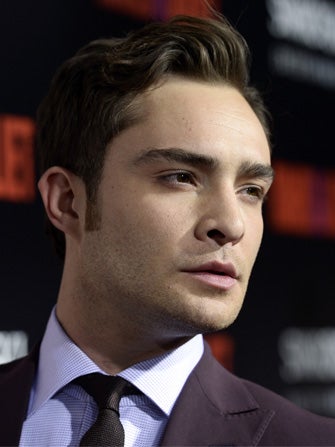 Ed Westwick sure knows how to play a villain. For six years, the actor played lovable playboy Chuck Bass on Gossip Girl, and now, he's taken on the iconic role of Tybalt, Juliet's riotous cousin and Romeo's enemy, in the latest adaption of
Romeo and Juliet.

We sat down for a little one-on-one with Westwick, where he gave us the 411 on everything from how he prepared for the role to his love of Homeland (and co-star Damian Lewis) to why he moved to L.A.— and we were certainly captivated by what we heard. Get to know a little more about the TV-turned-film star below, and you'll remember all the reasons you fell in (ahem) love at first sight when you watched him on GG all those years ago. Now, all we have to say is: Long live the bad boy.
Advertisement

Shakespeare is undoubtedly a big part of English culture. Were you a fan before you got involved in the film?

“Absolutely. I mean, how can you not be a fan of the greatest playwright of all time? We grew up with it, learning some of the plays in school. And, as an actor, you always have a relationship with that sort of work. For me to be involved in a film like this is a great joy.”

This is different from your other projects. Did you ever feel nervous taking it on? Did you look at past adaptations?

“I absolutely wanted to have my own take on the role. For me, I did a lot of research about the Renaissance in Italy. I found what I wanted to do with Tybalt is I wanted to show somebody who was trapped between generations. During that time, the culture was shifting, it was more towards business and away from potential savagery and the warring of the middle ages, and I wanted to show somebody trapped between those times. What I think is very interesting about Romeo and Juliet and the characters and the Montagues was that you don’t really see — there was no information given about Tybalt’s father. We have the Montagues, the Capulets, and Lord Capulet, who’s Tybalt’s uncle, but we never hear anything about his own family. I imagine, perhaps, he was a soldier or warrior, and he was killed, and that was the one message Tybalt had grown up with. What I wanted to demonstrate and convey, hopefully, was that he was an individual trapped and struggling to adapt to a new era within Italian culture."

Was it hard to get into that mindset, to get into that sort of character identity, or did you find you could relate to him?
“I wouldn’t say it was hard. It’s one of the beautiful things. You go on a journey of research, and I’ve read about the era and, you know, thought about the character, but also used some contemporary references, people that I actually know, who I thought of as a modern-day Tybalt. For me, it was a really interesting journey and exploration to come up with this character.”

How did you feel when you first started reading the script? We found it easy to follow.
“Exactly. It doesn’t follow the true verse. My whole point that I’ve been making about this is: I feel what’s great about it is it’s very accessible to people who — as the days go on and the years pass by, we become less and less familiar with old English. Julian’s adaptation, what it provides, is a way and a means of a contemporary audience to potentially grasp a little more of the poetry of the language, and the story in general. And, it’s a wonderful thing, you know.”

Any funny stories from filming? Any on-set pranks or funny nights you remember?
Yeah, actually. I ambushed Douglas Booth late night, after dinner, and we launched into our fight sequence. We just rehearsed it that day and we were both incredibly excited by what we learned. We worked with these fantastic masters in Italy and they taught us some wonderful stuff. We went at it at about 2 a.m., and, I swear, in Verona, there were quite a few pissed off Italian residents screaming out of their windows for us to ‘shut the hell up.’ Nonetheless, it was a good time, and I felt like it was a great bonding thing between Douglas and I.”

On Gossip Girl, you had a very believable American accent. Did you struggle at all with the Shakespeare, or were you just relieved to be back in your native accent?
“I mean, I wouldn’t say struggled with it in any way, you know. It was a challenge getting to know the language and getting to know the timing. But, one of the things that was very beneficial to me as an actor was, through Julian’s adaptation, I was able to understand more of the language and the message we were trying to communicate through the dialogue. And, I thought instead of finding it difficult, it was an interesting challenge and it was a wonderful experience."

What are you working on next? Do you want to try more film or TV or a mix?
“At the moment, you know I did six years on Gossip Girl and it was an amazing experience. It was my first time working on an American TV show. And, right now, I’m enjoying the idea of exploring film and going from character to character. But, I’d also like to say that American television is really, really coming into its own. I think it’s amazing – the ambition that American television has is really attractive to any actor, because the quality of the content is superb right now."

Do you have a favorite TV show?
“One of the funny things is that when I first met Damian Lewis, when we were doing Romeo and Juliet, I adopted the fan mode and told Damian that I’m a huge fan — then I kind of felt like a bit of an idiot. But, no, I’m a huge fan of Homeland – unfortunately I haven’t seen the season premiere, so don’t spoil it for me. But Boardwalk Empire, Homeland, and Eastbound and Down, which is very different for an English man, but I love that as well.”

Are you NYC-based or do you live in L.A.?
“I decided to leave New York after Gossip Girl, and I had such a specific experience of it for the time we were there. I have a place there and I look forward to going back at some point. I have wonderful friends there, and New York is an amazing place and did so much for me, and it was an incredible experience, but what I’d like to do, is, at some point, is go back and experience it in a different way.”

How do you think L.A. ranks compared to NYC? What’s the one thing you always do in L.A.?
“One thing I always do in L.A.? Probably get more suntans than New York, you know. But, L.A. is great, as well. I mean, I’m still getting to know it. You know I came here in January, and I was only here for a few months. I spent the summer in the UK, but recently came back, and am enjoying being part of the buzz here. I don’t think it’s going to be me forever. London still has my heart, it’s where my family is. One day I will make the pilgrimage home."