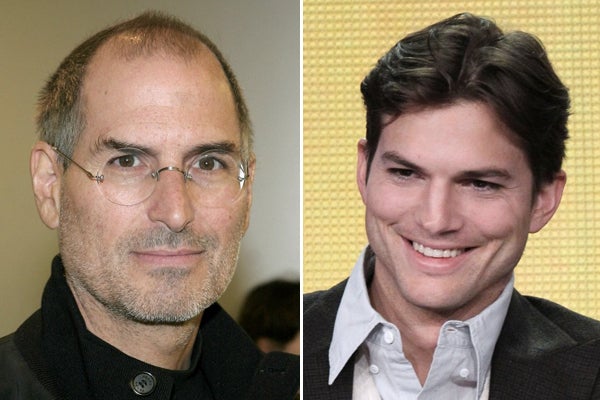 Okay, so we may be slightly tardy to the party, but we are still fumbling a bit over the fact that Ashton Kutcher is playing Steve Jobs in a sure-to-be-huge, upcoming indie biopic. Um, say what?
We’re not gonna lie — we see the resemblance, but does it make that much sense for the tabloid star and actor, known for films such as Dude, Where’s My Car? and What Happens in Vegas, to portray a Bay Area (and global) icon who's perhaps the most influential person in tech? Seriously, what was the casting director on? We're thinking the producers of the flick, who begin filming in May, might need to go back to drawing board on this one.
Advertisement
But hey, that’s apparently just us. It looks like one big Apple power player is singing a different tune. News broke this morning that Steve Wozniak has co-signed the Kutcher casting.
"I'm glad that he's onboard," Wozniak tells TMZ. "I think he'll put a lot into it and that he cares about this particular subject. The fear that many might have is that Ashton was selected because he's 'hot' right now. But I feel that his selection was done in the most professional manner."
Okay, perhaps we can kind of see Wozniak's point, given Kutcher's involvement with so many tech startups (hence the emotional involvement with "this particular subject"). Still though, we'd love to hear the case for someone else...perhaps even a little-known actor to fill such a huge and career-defining role. Any suggestions on who should play Jobs — and the Woz! — let us know in the comments.